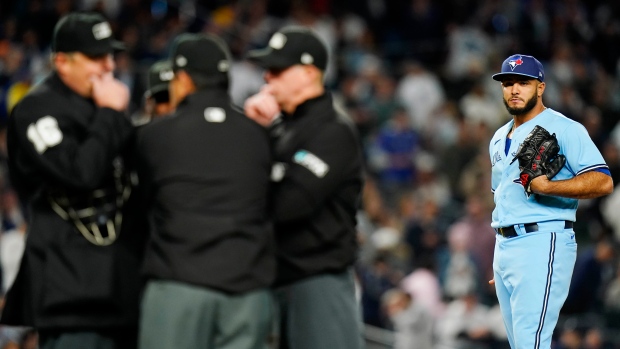 Toronto Blue Jays reliever Yimi Garcia did not hold back his thoughts when asked about Tuesday night's heated affair against the New York Yankees, in which Garcia, Jays' pitching coach Pete Walker, and manager Charlie Montoyo were ejected.

“Last night was one of the worst nights of my playing career, regarding the baseball," Garcia said on Wednesday, through an interpreter. Garcia added that he did not intent to hit Donaldson and called the balls being used by MLB this season are "embarassing" and "really slippery".

Garcia was ejected without warning in the sixth inning after hitting Yankees' third baseman Josh Donaldson in the upper arm with an errant pitch. Walker was immediately tossed from the game when he and Montoyo ran onto the field to argue crew chief Alfonso Marquez's decision. Next inning, Blue Jays' shortstop Bo Bichette was hit with a pitch from Yankees reliever Jonathan Loaisiga and Montoyo was tossed after yelling at the umpires from the dugout.

Following the game, which the Yankees won 6-5, Montoyo told reporters that the umpires decision to eject Garcia was based on words being exchanged between Donaldson and Jays catcher Tyler Heineman in the fifth inning.

Donaldson spoke after the game, adding that he didn't think it was intentional.

“In my heart of hearts, I don’t think it was [intentional], but it didn’t look good on television, that’s for sure.”

Montoyo will return to the bench to manage as the Jays and Yankees battle again on Wednesday afternoon. Despite Tuesday's animosity, Motonyo believes his team can take some positives from the night's events.