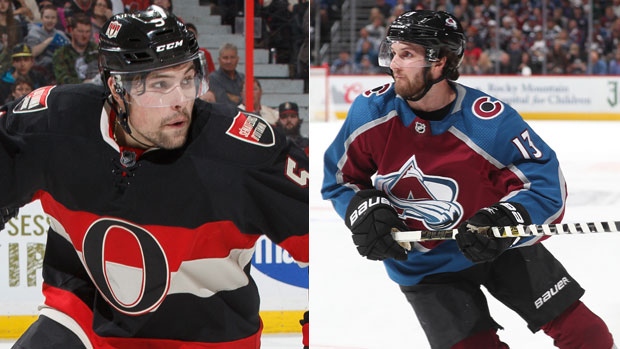 The Maple Leafs locked up recent acquisition Alex Kerfoot to a long-term pact on Thursday, signing the forward to a four-year, $14 million contract.

Kerfoot, 24, was traded to the Leafs on Monday as part of a four-player swap between Toronto and Colorado that sent centre Nazem Kadri and defenceman Calle Rosen to the Avalanche in exchange for Kerfoot and defenceman Tyson Barrie.

Kerfoot is coming off his second NHL campaign with the Avs, having produced 85 points (34 goals, 51 assists) in 157 games. He was an unsigned restricted free agent at the time he was moved to Toronto.

Leafs’ general manager Kyle Dubas made it clear right away that he had a plan in mind for Kerfoot, who projects to be Toronto’s third-line centre next season.

“He’s a versatile player. He’s a centre and wing for Colorado and he’s produced very well in his last two seasons,” Dubas said on a media conference call Monday. “The thing we like about [Kerfoot] the most is just his competitiveness, his speed, his ability to transport the puck up the ice. We’re excited to get him. He’s a younger guy than [Kadri], so we’re hoping he’ll be a part of it here for a long time.”

Drafted in the fifth round, 150th overall, by the New Jersey Devils in the 2012 NHL Entry Draft, Kerfoot decided to pursue his college hockey career at Harvard, dressing for the Crimson from 2013-17. Following that four-year stint, Kerfoot opted not to sign with the Devils because of the organizational depth they had at centre and became a free agent, eventually landing on a two-year pact with the Avalanche.

Kerfoot was celebrating Canada Day just north of his native Vancouver on Monday when he got word of the trade.

“It was a little bit stunning. I never really expected to be traded,” Kerfoot said on a conference call later that night. “But I don’t know if there are many better places to be traded to right now than the Leafs in Toronto. They’re a huge hockey market; the team is in great shape going forward. It’s an exciting group to be a part of it.”

There should be at least a couple of familiar faces to help Kerfoot get settling in Toronto this fall. He grew up playing with fellow Vancouver transplants Morgan Rielly and Nic Petan.

While Kerfoot doesn’t bring the same high-level skill set that Kadri did, his versatility and reputation has a highly coachable player should make him easy to move around the lineup if needed. At a team-friendly $3.5 million average-annual value, Kerfoot’s contract is a home run for cap-strapped Toronto.