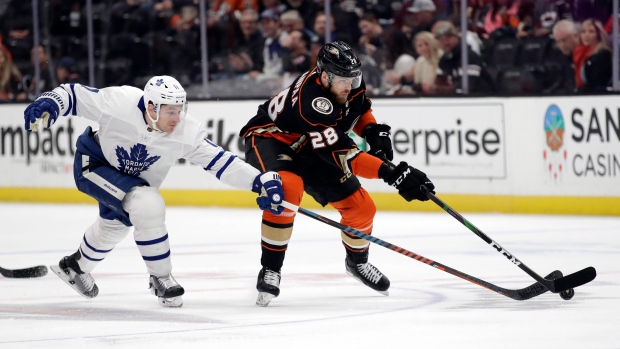 ANAHEIM, Calif. — John Gibson picked up his fifth straight 20-win season Friday night, but it might have come at a cost.

The Anaheim goaltender was injured midway through the third period of the Ducks' 2-1 victory over the Toronto Maples Leafs. Gibson — who made 26 saves and blanked the Leafs — appeared to be hurt while making a save on a shot by John Tavares. He came off with 9:40 remaining in the game after Adam Henrique's goal put Anaheim up 2-0.

Coach Dallas Eakins did not have an update on Gibson after the game.

Ryan Miller stopped four shots in relief, including a one-timer from Tavares with 38.6 seconds remaining.

“It’s not a good feeling, but it’s better when you’re staring at a two-goal lead. Thankfully we had the buffer,” said Miller, who made the 778th appearance of his career, moving him into second place for NHL games played by U.S.-born goaltenders. “We were hard on them and didn’t allow them to get turned up the ice in the neutral zone. It was a pretty effective way to keep them frustrated."

Carter Rowney and Adam Henrique scored for the Ducks, who have won four of their last six.

“The primary objective was to jam that neutral zone up. I thought our guys did great job,” Eakins said. “It was muddy and deep coming through there for them. That’s what we have to do against teams with great skill like that.”

William Nylander scored with three minutes remaining in the game for Toronto, snapping a Leafs' scoring drought of 144 minutes, 33 seconds. Jack Campbell made 29 saves as Toronto has lost its last three.

“This trip we haven’t been able to generate much offensively,” coach Sheldon Keefe said. “You look at a lot of the goals we’ve scored here in recent games, a lot of it’s been happening around the net. We need to have more of a presence in there.”

Rowney opened the scoring 3:47 into the first period when he got the rebound of Michael Del Zotto's shot from the point. Campbell made a pad save, but Rowney was down low to knock it in for his eighth goal of the season along with a point in three straight games.

Henrique gave the Ducks some breathing room midway through the third with a wrist shot from the slot. It is the centre's team-leading 25th goal and his first point in five games.

Nylander scored his 30th of the season after Toronto brought on the extra skater. The right winger forced a turnover in the Ducks' zone and put a wrist shot at a tough angle from the left faceoff circle between Miller's legs.

NOTES: Maple Leafs D Cody Ceci was activated off injured reserve. Ceci missed 14 games after suffering an ankle injury against the New York Rangers on Feb. 5. ... Ducks RW David Backes had an assist on Rowney's goal for his first point with Anaheim. ... Nylander's goal marked the first 6-on-5 road goal by the Maple Leafs since James van Riemsdyk did it on Dec. 29, 2017 at Colorado.