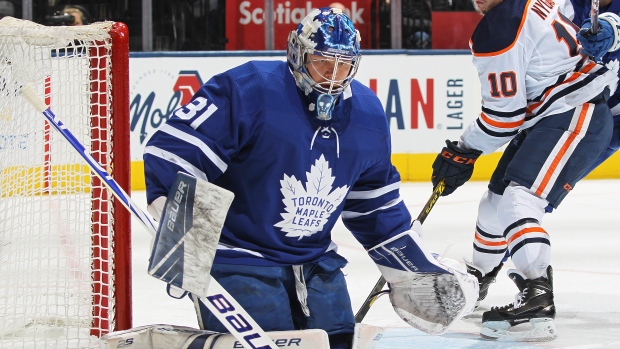 Toronto Maple Leafs goaltender Frederik Andersen said Tuesday that he still has concerns about the viability of the National Hockey League’s planned conclusion to its shuttered 2019-20 season.

“I’m not quite 100 per cent confident yet,” Andersen told reporters on a conference call Tuesday. “I think the league is very adamant about working towards that [return]. I think once we get to the hub cities, everyone has to be confident [in those] and that the league will have a good setup. So once we get there we'll be good, but I think it's a matter of getting there first. It looks like there’s some more things that need to be ironed out first.”

The NHL is reportedly on the verge of announcing where those two hub cities will be for a prospective return to the ice amid the COVID-19 pandemic. The league is currently in Phase 2 of its Return to Play protocol, allowing small groups of players to participate in voluntary workouts.

Andersen arrived in Toronto from his off-season home in California last week to begin taking part. He is only permitted to travel between his condo and the Leafs’ practice facility until he’s fulfilled the government-mandated 14-day quarantine period for cross-border travellers.

Despite the need to isolate, Andersen felt it was important to be back in town and ready to go by July 10. As of now, that’s the league’s intended start date of Phase 3 training camps for the 24 teams headed towards a playoff tournament in Phase 4, where Toronto would face Columbus in a best-of-five qualifying-round series.

But all that can only come to fruition if the NHL and the NHL Players’ Association agree on the parameters of a comeback.

“I don't think I have just one [concern],” Andersen said. “There's a few things that need to be figured out, and players have to vote on it, and I think we still have a little bit of a ways to go. The whole thing in general has got to make sense. Just with future CBA stuff [the league’s current collective bargaining agreement expires in 2022], and obviously safety is very important. I'm confident that we'll have something to vote on. I want to play; I don't want to just sit and waste the summer or a season.”

To Andersen’s mind, deciding on hub cities may be the easiest part of the process. TSN Hockey Insider Bob McKenzie reported Tuesday that the NHL’s final four considerations for those slots are Toronto, Las Vegas, Chicago and Edmonton, meaning the Leafs could end up on either side of the border.

Given the uptick in COVID-19 cases throughout the United States – including in Nevada, which has seen a surge in its numbers this week – it might be more prudent for the NHL to keep both its hubs in Canada. But Andersen doesn’t see much need for that.

“Once we have the hub cities set up and the hubs are secure enough, I don't think there should be any real doubt [about safety] because if it's a closed environment, then we should be fine, right? That's how I see it,” Andersen said. “I don't think it really makes a big difference if it is a bubble and it's done the right way; it really shouldn't matter.”

It also wouldn’t irk Andersen to see a club playing in its own city, since health and safety measures put in place for everyone would negate any home-ice advantage.

“The flight there, I think that's the only difference. Once everyone is in the hub city I think everyone will be at the same level,” he said. “People will be familiar with the hotel, the rink, all that stuff. There won't be fans obviously, so I think all that [other] stuff will be a pretty even playing field for everyone.”

In preparation for what’s potentially to come, Andersen has been back on the ice every day at the practice rink, working his way into game shape. Since the NHL hit pause in March, Andersen had previously skated only sporadically while he was quarantining in Scottsdale, Ariz., with teammate Auston Matthews.

Andersen departed for California earlier this month, prior to Arizona becoming one of the hot spots for the coronavirus in North America. He spent the intervening time before returning to Toronto trying to hone his craft in the gym, knowing it will be difficult to get timing back without shooters.

“I feel like I've been able to keep my good shape and work on things that I could off the ice,” Andersen said. “But the on-ice timing is going to be the key, so hopefully once we can expand our groups [in training camp] to a more normal pace and all that, I think that's going to be the biggest key for me.”

At this point though, Andersen needs to see more facts from the NHL about what a return to play will entail before he can become fully invested in a next chapter.

“I don't think we have enough information yet,” he said. “I think the PA and the league are still ironing that out and then we'll see. It seems like it's the 11th hour here, so hopefully things will progress a little bit in the next week, because the July 10 goal is coming up soon. I think we'll see [what they say], and make a decision once [we] have more info.”