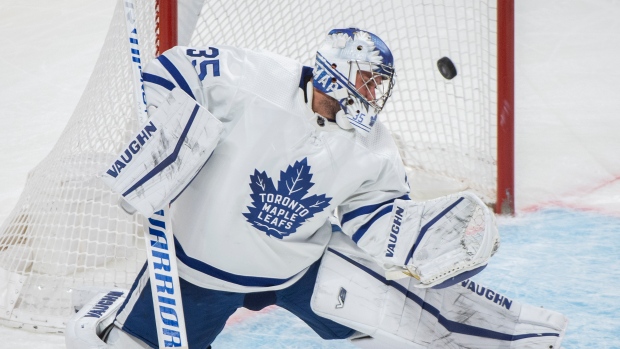 The Maple Leafs (optional) skated at Scotiabank Arena on Wednesday.

Just days after clearing waivers, Petr Mrazek will get the start for the Leafs on Wednesday against the New Jersey Devils.

"In talking to him, you know, he's in a good place relative to what he's been through here," said coach Sheldon Keefe. "He's handled it well. He had a really good practice day yesterday so it's a good opportunity to kind of clear his head and get going."

"As teammates, it's up to us to support him," said defenceman Morgan Rielly, "to play really well in front of him and just to make sure that he feels comfortable. I don't have a lot of experience with the waivers and what that looks like, but I know it can be challenging on guys and take a toll, but you wouldn't know it. He came in yesterday and worked really hard. He's here today kind of business as usual, and I think that's really impressive."

Mrazek hasn't played since the Heritage Classic loss to the Buffalo Sabres, which was 10 days ago. He hasn't played at Scotiabank Arena since allowing four goals on 12 shots and getting pulled against the Arizona Coyotes on March 10.

"As teammates, we all believe in him," said captain John Tavares. "We know his track record is very strong. He's been a quality goalie in this league for a long time and has had really good success. I don't think there's any doubt that that's there."

One of Mrazek's better games this season came against the Devils in Toronto when he stopped 19 of 20 shots to notch a win in relief of Jack Campbell on Jan. 31. The Devils sit 27th overall and should be fatigued after playing Tuesday night.

"They’re a top-10 team in the NHL in scoring changes generated," Keefe warned. "They're No. 1 in the NHL in generating scoring chances off the rush, starting from their breakout. There are elements of their game that, if you're not committed and you're not dialled in and focused on your own game, they can expose you. You got a team that's No. 1 in an offensive category and if you don't take care of that area of the game, they get momentum and get going. That's precisely what happened in the game last night."

Now that the trade deadline has come and gone, there is a different feel around the Leafs.

"Basically, everybody that was in our room yesterday, that's our group so let's go to work," Keefe said. "We know what we need to do. We know where we need to go. We know what we're trying to accomplish, so let's get to work. I thought yesterday's practice was outstanding in terms of the energy and competitiveness that we had with the group and the work that we got done. So, really good vibes coming out of that and that's what you want to see."

The Leafs are comfortably in a playoff spot, but the battle for seeding in the Eastern Conference will be intense down the stretch. The Leafs trail the Atlantic Division-leading Florida Panthers by seven points but sit just one point behind the Tampa Bay Lightning. However, Toronto is also level with the Boston Bruins on 83 points and could easily slip into a wild-card spot.

Keefe set the tone at a pre-practice meeting on Tuesday.

"The message to our team is we got 20 games remaining here. We got seven of those games against Florida, Tampa and Boston, so we got lots of opportunity here to control our own situation," the coach said.

Keefe previously said he believes the Leafs should win the division.

"It's a good challenge for us," said Rielly of the stretch drive. "We got lots of games within our division. We're in a good spot in the standings. It's a great time to be here. It's all positive. The team got better. The attitude, in general, is that we're prepared to take on any challenges that come our way."

It helps that general manager Kyle Dubas shored up the roster before the deadline by adding defenceman Mark Giordano and forward Colin Blackwell via a trade with the Seattle Kraken. Both players will debut with their new team on Wednesday.

Giordano will start on the third pair and second power-play unit.

"Gio's resume and track record speaks for itself," said Tavares. "He's going to be so valuable in so many different areas. Just complements our back end extremely well."

Tavares believes Giordano's mental toughness will be an important asset. The former Calgary Flames captain rose up the ranks despite being undrafted.

"Gio's always brought a competitive element his whole career," Tavares said. "I think that's probably really instilled in him. He took a non-traditional path to become an elite player and Norris Trophy winner."

Blackwell will start as the left winger on the fourth line with Jason Spezza and Wayne Simmonds.

"There's lots he can offer that line and it's about easing him in with our team," Keefe explained. "Really, what he was acquired for was to increase our depth and the effectiveness of our bottom lines, so that's where we'll start him. I do see potential for him to move up. With [Ondrej] Kase's absence there's great opportunity there for him."

Kase had been playing on the second line with Tavares and William Nylander before taking a hit to the head and leaving Saturday's game. He will miss Wednesday's game and there is no timeline for his return.

Alex Kerfoot has moved up to the second line. Kerfoot has spent much of that season there, but recently saw time with the fourth unit, which allowed the Leafs to move Spezza, 38, to the wing.

It remains unclear exactly how long Rasmus Sandin will be out.

"It's going to be weeks for sure is what I'm told," said Keefe. "How many? We're not certain of that. He's walking around and doing things in the gym and stuff like that. He's moving around, but it will take a little time for that to heal up and for us to get greater clarity on exactly how long. He's in pretty good spirits and back in the gym and doing things there so his recovery is certainly well underway."

The 22-year-old blueliner suffered a knee injury during Saturday's game at Nashville.

"He's a young guy," stressed Rielly. "He should be back in no time."

The Leafs will wear a new black alternate uniform to mark their annual Next-Gen Game on Wednesday. The design was created in collaboration with pop star Justin Bieber and Drew House. Leafs players have got to know Bieber in recent years.

"He's such a big fan," said Tavares. "We're all kind of, I don't want to say in awe, but you respect what he's done and what comes with his stardom and what he does as a performer and entertainer. He's one of the best in the world, so to be around that is pretty cool and you see how he's amazed by us because he's such a fan of the team, so it's a unique dynamic."

Tavares was asked if Bieber is the type of fan to be suggesting trades and looking into the salary-cap situation.

"He doesn't talk to me about that," the 31-year-old said with a chuckle. "Maybe he talks to Auston [Matthews] about that, it wouldn't surprise me with how much of a fan he is of the team."

Safe to say they like it, @justinbieber 😉#NextGenGame x @drewhouse pic.twitter.com/z5UpLUwppA