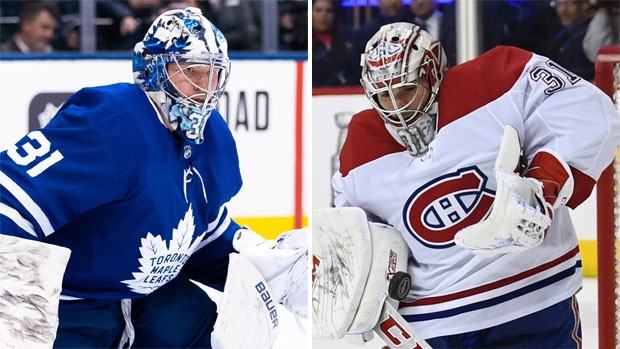 One of the most fascinating things about coaching strategy is how to balance the workload and expectations of a goaltending pairing.

In Montreal and Toronto, this discussion has become part and parcel of the media coverage surrounding the teams this season. The Canadiens have longtime goaltender and future Hall of Famer Carey Price guarding their net on a nightly basis. The Maple Leafs have Frederik Andersen – less accomplished on the resume, but a goaltender who has established himself as one of the better puck stoppers in the National Hockey League.

The common theme for both goalies is that they’ve been uniquely burdened through the first two months of the season.

The average No. 1 goaltender plays about 65 per cent of the available minutes in a given season in today’s NHL, which roughly translates to about 53 games played. Obviously, there are explanatory factors that can skew this in either direction – an elite NHL goaltender will likely hit the 60-plus game mark in a given season, while a team with a true platoon of goaltenders will see much more balance, and so on.

At their current usage rates, Price and Andersen will see about 65 games of action. That would be on the very high end of the workload spectrum for any goaltender. Because of the investment the teams made in these goalies specifically, and the skater group more broadly, the backup goaltender position was treated with relatively less care.

Montreal opted to run the season with Keith Kinkaid as their backup, while Toronto has given eight games to a combination of Michael Hutchinson and Kasimir Kaskisuo. The save percentages of those three goalies respectively – 87.5 per cent, 87.6 per cent, and 84.2 per cent – are dreadful.

The situation is a bit different for both teams, though.

Andersen has been quite good once again this season, and for as long as he’s stopping shots (he’s carrying a 91.7 save percentage and has saved almost six goals above average year to date) the Maple Leafs will continue running him out. But a combination of a slow start, their perilous backup situation, and a pressure to deliver a Stanley Cup contending team means little opportunity for the Leafs to rest Andersen. With that, of course, comes the inherent risk of fatigue, performance regression, or injury driving the only decent goaltender in the system out of the equation.

There’s a different challenge in Montreal. The Habs are chasing a playoff spot too, but the Canadiens have gotten very little out of Price this season – he is stopping 89.9 per cent of shots and has saved about seven goals below average in his 23 appearances. The Canadiens’ options in the system are dire, and so Price must continue playing. But Price’s performance in a vacuum would justify – at a minimum – reducing his starts.

If we plot these goaltenders out relative to their peers based on usage rates and goals saved above average, we see two things: extremely high burn rates, and divergence in performance. 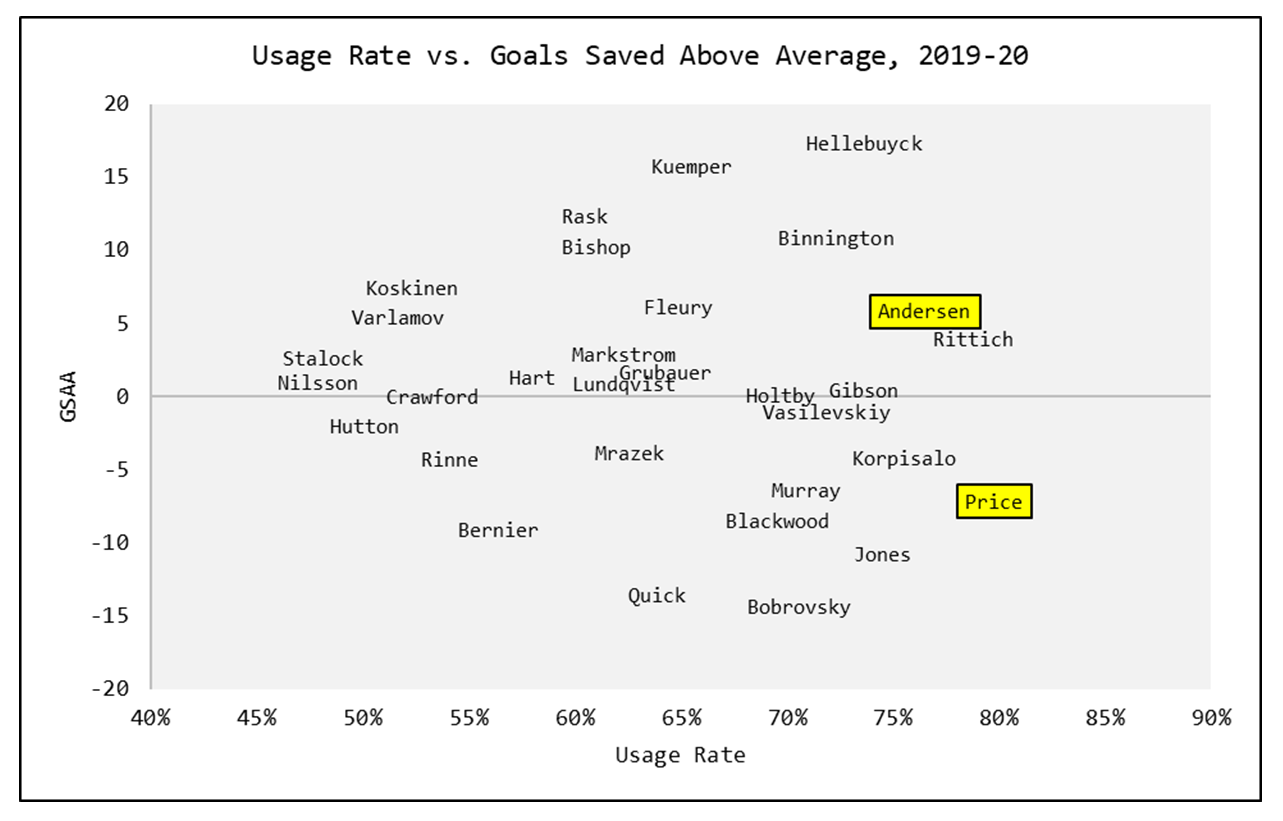 It’s hard (if not impossible) to quantify what the perfect balance is for a given team, but we can always compare the goaltenders to what we would consider operationally normal. In this case, both Price and Andersen are bordering on usage rate outliers. But the pressures for both organizations – Toronto knowing they simply cannot rest Andersen or risk losing more ground in the standings; Montreal having to balance a possible performance issue with a well-paid goaltender – is substantial.

(As an aside, I would be remiss to not point out that the Calgary Flames have similarly burdened David Rittich so far this season. That said, backup Cam Talbot’s middling numbers look like Dominik Hasek in his prime compared to the options in Montreal and Toronto.)

At any rate, keep this in the back of your mind as different in-season milestones approach. The trade deadline (Monday, Feb. 24) is just 10 weeks away, and neither team currently sits in a playoff position. Pressure is mounting, and in both cities, eyes are fixed on the goaltender position.