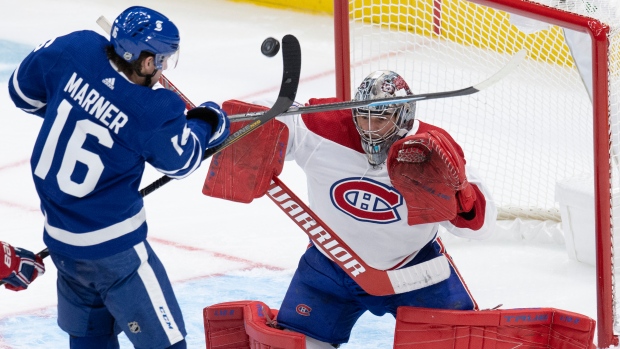 "It's a complete lie," Marner said, noting he heard of the report from his agent. "It's just people trying to get their name out there. It sucks that stuff like that's being said. I think everyone can see I'll try and play any role I can to help this team win."

Marner was held to four assists in the team's first-round loss to the Montreal Canadiens, and went pointless in the final two games of the best-of-seven series as the Canadiens battled back to advance.

The 24-year-old, who scored 20 goals and posted 67 points in 55 games during the regular season, had one power play point in the series after posting 14 during the season.

"We're all very disappointed because we had such high faith in ourselves and confidence that we were a team that can do a lot of damage and be special and obviously it hurts that we didn't live up to our own expectations," Marner said of the season's result.

Signed at the NHL's seventh-highest cap hit of $10.9 million, Marner struggled for the second straight postseason after being held without a point in three of the team's five games in the qualifying round against the Columbus Blue Jackets last summer. Marner’s last playoff goal came when he scored his second of the night in the team's playoff opener against the Boston Bruins in 2019.

This year marked the fifth straight season the Maple Leafs failed to win a playoff series, with core players Marner, Auston Matthews, William Nylander and Morgan Rielly a part of all five exits.

"This year we had the talent, we had the will and we had the fight and it just didn't come through. It's always the same words at the end of the year and that sucks."

"To answer it bluntly, we have to learn how to close a series out," Rielly said. "If you could go back and change things, we all would. But when we were talking to each other before games, I truly thought that we were up to the challenge. Maybe it's a good opportunity for us to look at ourselves in the mirror, ask if that was really the case."

The Maple Leafs have failed to win a playoff series since last reaching the second round in 2004.