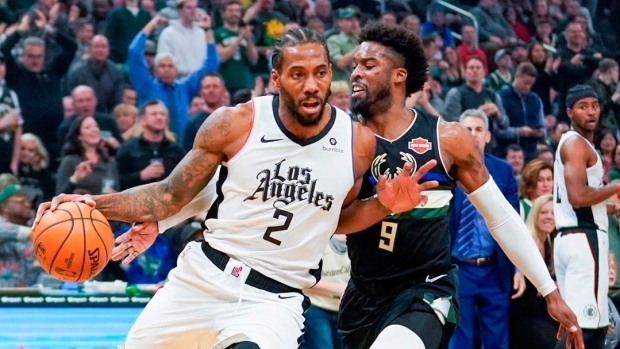 TORONTO — Two nights after Paul George's hostile treatment in Indiana, it should be nothing but love for his teammate Kawhi Leonard in Toronto

Leonard will be presented with his NBA championship ring in a pre-game ceremony Wednesday in a city that appears to be more grateful than hateful toward the enigmatic superstar who left for his hometown L.A. in the off-season.

"It will be great man, a guy like (Leonard) coming back to a place that he called home for a year, and helped us do some fantastic things," Raptors guard Kyle Lowry said. "I think it's going to be an unbelievable night — rather for the first five minutes, and then after that it's a basketball game."

It was an unbelievably ugly night for George on Monday. More than two years after he left the Pacers, he's still Public Enemy No. 1 in Indiana. The ugly jeering threw off Clippers coach Doc Rivers, who told ESPN he was "shocked" and "ill-equipped."

"It was offensive to me," Rivers said. "I was unprepared for that."

The boos failed to throw the 29-year-old George off his game. He scored 36 points and grabbed nine rebounds to lift the Clippers — who were playing without Leonard — to an 11-point win over Indiana.

"That's Indiana for you," George told reporters afterward. "You know what, some day I'll do a 'tell-all,' and I'll tell the leading events of how I left Indiana. And I promise you I'm not the one to boo."

The story of Leonard's departure, while heartbreaking for fans, had a much more positive spin. There were tribute videos to the player dubbed King of the North in the wake of his exodus. He received a hero's welcome in a pre-season game in Vancouver. Leonard said he's been approached by numerous Canadians in California who wanted to say thanks.

Wednesday's pre-game ceremony at Scotiabank Arena — where two seats behind the broadcast table were going for more than $10,000 apiece on the secondary market Tuesday — should prompt a similar outpouring of gratitude.

"If they give him one-fifteenth of what they gave us on opening night, it's still going to be something. It was really amazing the night we got ours," the coach said.

Lowry said he remains friends with Leonard. They text and joke regularly. There's something special and lasting, Lowry said, about a group of players who win a championship together.

Lowry had reporters laughing when asked if he learned anything from Leonard last season. Lowry answered yes. Could he provide an example of such learning?

Leonard had one of his worst games of the season when the Raptors visited L.A., scoring just 12 points on 2-for-11 shooting and coughing up a career-worst nine turnovers in the Clippers' 99-88 win.

The Raptors were missing both Lowry (fractured thumb) and Serge Ibaka (ankle straight) that night, while OG Anunoby left the game in the first two minutes after Leonard swatted him in the eye.

The Clippers were also shorthanded. George was still recovering from off-season shoulder surgery.

While Toronto has fared well in slowing down several NBA stars this season, Nurse will have to dig deep into his defensive bag of tricks to stop both Leonard, who's averaging 25.1 points on 44.7 per cent shooting, and George (23.9 points on 44.6 per cent).

The Raptors managed to cool off red-hot James Harden last week with a halfcourt trap, but Harden happily drew the double team that left numerous Rockets wide open. They punished Toronto to the tune of 19 three-pointers. Ben McLemore had a season-high 28 points, making a career-high eight threes.

Marc Gasol, who was outstanding defensively in Toronto's 93-92 win in Chicago on Monday, said the Raptors will be all-business in welcoming Leonard. Any pre-game emotions won't be felt on the Raptors' side of the floor.

"Obviously we're going to try to beat them, just like we did in LA," Gasol said. "It's not going to be emotional because we already got our rings. Hopefully it's very emotional for him, but for us it's going to be pretty business-oriented."