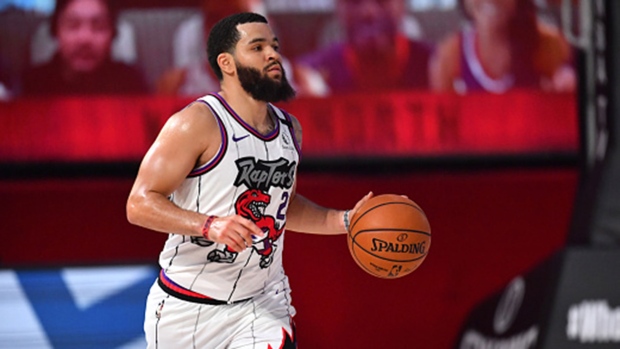 TORONTO – Sitting in front of a backdrop branded with his initials and logo – his popular manta, "Bet on Yourself," encased within a poker chip – Fred VanVleet was finally able to let out a deep sigh of relief, both literally and figuratively.

The 26-year-old point guard had just put pen to paper on the new four-year, $85 million contract that he and the Toronto Raptors drew up on Saturday afternoon, shortly after free agency opened around the association the previous evening.

The Raptors had prioritized VanVleet, and while he spoke to a few other teams and attracted interest on the open market – as you would expect, he was arguably the best player available – he always felt confident he’d be back with Toronto. That they came to the negotiation table with a competitive offer showed the rising star how much he’s valued.

Signing his first NBA mega deal wasn’t VanVleet’s only goal when he broke into the league four years ago, it wasn’t even his biggest goal and it certainly won’t be his final goal, but this was a day that he had been thinking about and working towards for a long time.

His story is truly inspirational, one of the greatest in all of sports, but – as he likes to remind people – it wasn’t always as glamorous as it turned out. This seemed like an appropriate moment to look back and reflect on his unique journey – from Rockford, IL to the NBA, from undrafted free agent to Finals hero and champion, from training camp invitee on a partially guaranteed $500,000 deal to one of the highest earners at his position.

"From childhood on up, there’s a million and one stories," said VanVleet, speaking to the media via videoconference on Tuesday morning.

Growing up, he remembers driving cross-country to play in basketball tournaments that other teams were able to fly to – eight kids jammed into a minivan for hours. He remembers being overlooked coming out of high school and the challenges of playing for a mid-major program at Wichita State.

He remembers going through the pre-draft process – one team wouldn’t give him a ride to the airport, another didn’t know who he was once he showed up. He remembers shooting on a side basket by himself after some of his workouts, because none of the coaches would rebound for him. And, of course, he remembers grabbing the microphone at his draft party in 2016 and telling his disappointed family and friends that he went unselected.

"Those types of things will never leave me and I will never forget any of those moments," he said. "So, it’s funny to see things come full circle but that’s what makes this journey that much more special, because of how I had to do it and how fast it turned around for me."

Ever since he started playing basketball at age five, VanVleet feels like he’s been fighting an uphill battle to get noticed and earn respect. In spite of the odds, he never doubted himself and always believed this level of success was achievable. Now that it’s come to fruition and he’s started to garner attention, it’s all felt a bit surreal.

He’s starred on basketball’s biggest stage and played a prominent role on a title-winning team. He’s coming off a breakout season, his first as a full-time starter. Still, it’s this contract and what it represents that has really hit home.

"I think the biggest thing for me is just being able to relax and just kinda exhale for once," said VanVleet. "I've been on this journey for 26 years and really 21 years if you're counting from when I really started playing basketball. It's a lot of pent-up anxiety and feelings about trying to get to this moment. So just being able to exhale and just release and feel good about how far we've made it before getting ready for camp and getting ready for the next year. I'm really happy and blessed to be in this position but I'm kinda already thinking about the next one."

That’s the mentality you need to continuously bet on yourself, and it’s why the Raptors are confident in betting on him now. Even if the new contract – and the financial security it comes with – gives him some validation and allows him to take a breath, you know it’s not going to make him complacent.

The chip on his shoulder is not something that can be lifted with accolades and a big raise. It’s part of his DNA as a player and as a person. It’s what drew Toronto to him four years ago, it’s why likeminded teammate, mentor and friend Kyle Lowry first took a shine to him, it’s the quality that Raptors rookie Malachi Flynn is hoping to emulate, and it’s the biggest reason VanVleet will never be satisfied and always strive for greater success.

"That’s just who I am," he said. "It’s not an off and on switch. That never turns off. That’s just who I am as a person, especially as a player and a competitor. I only know one way to play, and so that will be easy. I’ve done everything that I ever wanted to do, pretty much, so it’s not like I’m getting all this money and I have to go live an extravagant life. I’m good. This is a generational thing, this is for my family and the future of our families and that’s just kind of the way I’m looking at it. So nothing is really going to change on my end, other than just being more comfortable having that security and being able to open up and be myself a little bit more."

To see and hear how much people – inside and outside basketball – identify with his mission has been the icing on the cake for VanVleet. He understands that his success story has morphed into something far bigger than him or his brand. It’s inspired young players, like Flynn, who feel like they’ve been overlooked or discounted. It even transcends sports. VanVleet is a role model to anybody that has considered taking a chance – or betting – on themselves and chasing their dreams, in any profession or walk of life.

"It means the world to me," said VanVleet. "It’s a way of life. We put words to it that made it make sense to people but this is kind of the wave we’ve been on for a long time here. I’m just proud and excited and extremely humbled that I can start to see it transition from sports to regular life. We have people working regular jobs that come up to us and tell us that they hate their jobs, and they have this passion and they want to pursue this passion. Those types of things mean the most to me."

"I will add that it’s not always this story. It doesn’t always work out. There have been plenty of lows throughout this journey in the way that I had to make it to this point. But I made it to this point. That’s the important part. Once you detach yourself from the social media world of having the greatest day in the world everyday, you can manage through the ups and the downs and just focus on the end goal and understand that it’s a marathon."

And it’s far from over. For VanVleet, this has been a week of reflection – an opportunity to look back and appreciate how far he’s come – but it won’t last long. When training camp opens in Tampa next week, he and the Raptors have a new home city to get accustomed to and an overhauled frontcourt to integrate. He’s got a new contract and, with it, a bit more confidence – if that’s even possible – but his ambitions haven’t changed. They remain sky-high.