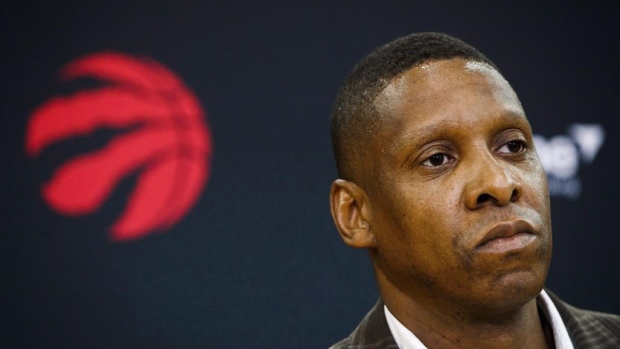 OAKLAND, Calif. — Lawyers for Toronto Raptors president Masai Ujiri say a law enforcement officer's court motion should be denied, calling allegations about a confrontation between the two at the 2019 NBA Finals "a complete fabrication."

Ujiri's legal team filed its response on Monday to Alameda County sheriff's deputy Alan Strickland's motion to the United States District Court in California, which came in the aftermath of the Raptors executive's counterclaim earlier this year.

The response says it's "entirely unreasonable" for Ujiri to be a security threat, as Strickland alleged in his motion.

Strickland's document said because it was a high-profile sporting event, there was a risk of crime. It lists examples including the 1993 stabbing of tennis star Monica Seles, the killing of Israeli athletes at the 1972 Munich Olympics and the 2004 NBA brawl between the Detroit Pistons and Indiana Pacers.

A Zoom hearing is scheduled for Nov. 17.

The dispute came as Ujiri tried to get on the court after the Raptors beat the Golden State Warriors to capture the NBA title last June.

The Raptors have said that a video released with the countersuit proves Ujiri wasn't the aggressor in the dispute.

The footage appears to show Strickland using his arm to stop Ujiri from getting to the court. As Ujiri tries to walk by, Strickland shoves Ujiri before the two appear to exchange words.

"Mr. Ujiri was abundantly calm, reasonable and compliant during his encounter with Strickland and there was absolutely no reason for Strickland to forcefully shove Mr. Ujiri twice without provocation," Ujiri's response says. "At this stage it would be improper to construe the facts in Strickland's favour and find otherwise."

This report by The Canadian Press was first published Oct. 20, 2020.