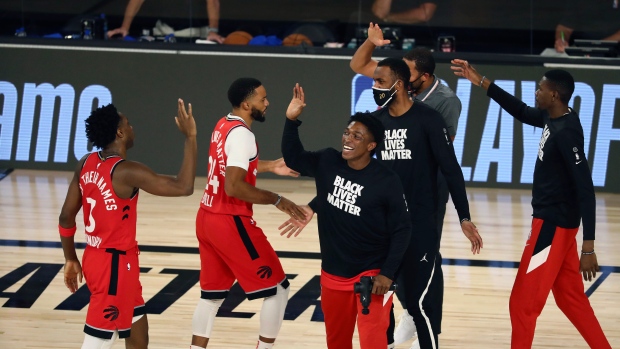 TORONTO – It’s a good time to be a Raptor, or a Raptors fan, at least it should be.

Over the past week, Toronto kicked off its opening-round playoff series against the Brooklyn Nets, and then proceeded to dismantle them in a convincing four-game sweep – the first in franchise history. It included two wire-to-wire wins and Sunday’s record-setting 150-122 Game 4 victory, in which they got 100 points of their 150 points from the bench – most in NBA history.

Fred VanVleet shot the lights out all series, Pascal Siakam came on strong towards the end, and the duo of Norman Powell and Serge Ibaka put together some big performances off the pine. In between, Nick Nurse claimed his well-earned Coach of the Year trophy.

They’ll advance to face the Boston Celtics – who also swept their way through Round 1 – in a matchup that many have been waiting to see play out in the postseason for a long time. The series, which begins on Thursday, should be a fun and competitive one.

In spite of all that, the Raptors and their fans will be holding their collective breath until they know more about the status of the team’s most important player.

Late in the first quarter of Sunday’s series-clinching win, Kyle Lowry was bringing the ball up the court, when – moving at full speed – he got tangled up with Nets guard Chris Chiozza and appeared to roll his left ankle.

Lowry went down momentarily, but true to character, he popped back up and wanted to stay in the game. Hobbled and in visible pain, Lowry lasted one possession before pulling himself out and limping to the locker room. He didn’t return and was taken for an MRI on the arch of his left foot, according to Nurse.

The Raptors didn’t need him to put the Nets away, as it turned out. Their 150 points set a franchise playoff record, as did their 39 assists, which they recorded without their starting point guard for all but nine minutes of the night. Powell and Ibaka combined for 56 points on just 28 shots, and the team’s 100 bench points were six more than the previous league record, set by Golden State in 1977.

It’s the type of performance that reminds you why they find themselves in this position to begin with. This Raptors team is bigger than any one person. The whole is greater than the sum of its parts. That’s how they were able to survive the loss of Kawhi Leonard, or withstand their many injuries throughout the season. Subtract one, two or even three players for whatever reason, and others are ready and willing to step up and deliver in their absence.

"I feel like I'm like a broken record saying this, but I think we have such great confidence, each and every one of us who steps on the floor," said Powell, who had a game-high 29 points – the most any Toronto reserve has ever scored in a playoff contest. "I don't think it really matters who's in the game, you guys have seen that all year long, that we're able to execute and make plays and continue to win. No matter what it looks like, I think we've always had a fighting spirit and once you have that and everybody collectively is playing for one purpose, which is to win, it don't matter who's scoring or what’s going on that night."

"So, we can have guys who are in foul trouble or - knock on wood - injury or whatever, but we're still able to play our brand of basketball, and continue to execute the game plan."

Still, the guy they can least afford to lose for any period of time – let along such a crucial period of time – is Lowry, that hasn’t changed. The Raptors are a deep team, they play hard every night and have an emerging star point guard in VanVleet. However, Lowry remains their engine. He’s their toughest player, he sets the tone at both ends of the floor, and elevates the other guys on the court. Whether he’s still their best player is open for debate, but he’s almost certainly their most valuable player.

At this point it would be foolish to count the Raptors out, regardless of who they’re missing, even against a team of Boston’s calibre. However, they need Lowry in order to play their best basketball, and given how well the Celtics are playing, they may have to be at or close to their best to get past them.

"I won’t be very comfortable without Kyle out there, I will say that, he’s certainly a big engine for us," said Nurse.

Suddenly, that’s become the biggest benefit of getting through the first round quickly. Lowry will have three full days to rest his foot, as well as most of Thursday, assuming an evening start time for Game 1.

One thing we know about Lowry, though, is that if he can play, he will play. For at least a third of last year’s championship run – including all of the NBA Finals – he was dealing with a thumb injury that required surgery during the offseason. He’s almost playing through something – bumps or bruises, aches and pains, and occasionally something more serious. If his tests come back clean and he’s cleared to play, if it’s just a matter of pain tolerance, you can bet he’ll be out there to start the Boston series.

"I would imagine [it would have to] be a hell of an injury to keep him off the floor," Nurse said. "It’s not going to be a little thing; he’s going to try to figure it out.

He played, I don’t know how many playoff games last year with a totally messed up left thumb, running through the Finals last years. It’s gonna take something pretty serious to keep him out. You guys know how tough he is."

The team should know more about the severity of Lowry’s injury over the coming days, as should we, and until then they’ll be crossing their fingers and hoping for the best.