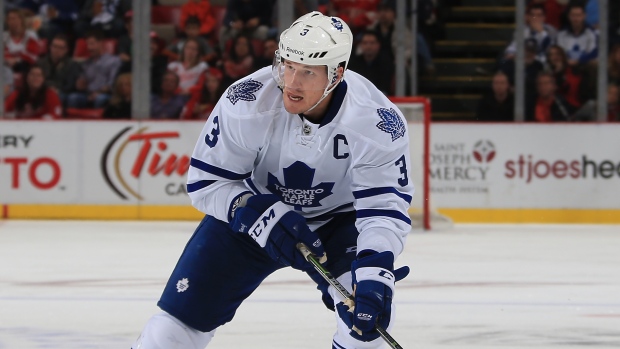 Should Toronto Maple Leafs captain Dion Phaneuf return from his hand injury prior to the trade deadline, Bruce Garrioch of the Ottawa Sun reported Sunday there will be a market for him.

According to Garrioch, the Los Angeles Kings, Dallas Stars and Anaheim Ducks have all shown interest in the 29-year-old.

Phaneuf has not played since January 21 and was placed retroactively on injured reserve prior to Saturday’s win over the Edmonton Oilers.

Lawless believes Kane could be dealt in one-for-one trade, but that admits the scenario is unlikely to happen before the summer.

With Kane out for the remainder of the season with a shoulder injury, teams gearing up for a playoff push are not currently interested in adding the forward.

Rob Longley of the Toronto Sun believes pending free agent Cody Franson could be reunited with the Nashville Predators before the trade deadline.

Franson was drafted by the Predators in the 2005 NHL Draft and played 141 games with the team before being traded to Toronto.

Longley lists Daniel Winnik and Mike Santorelli as other possible trade targets for the NHL-best Predators.

Kevin Kurz of CSN Bay Area reported Sunday that the San Jose Sharks forward Tyler Kennedy is a 'prime candidate' to be traded before March 2.

Kennedy, 28, is set to become an unrestricted free agent this summer and has been a healthy scratch in consecutive games.

In 20 games this season, Kennedy has four goals and five assists with a plus-five rating.

The Sharks currently sit second in the Pacific Division.