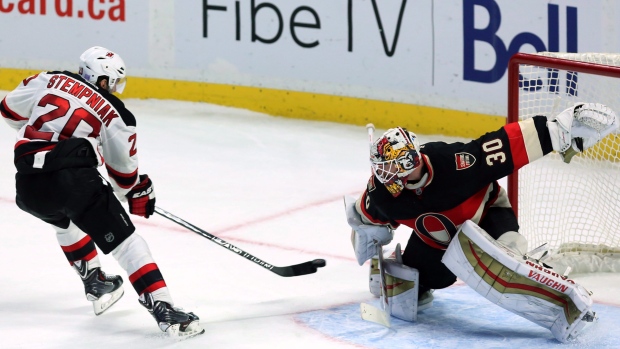 New Jersey Devils forward Lee Stempniak has played for eight NHL teams over 11 seasons and is unsure whether he will see a ninth by the trade deadline.

“You never know what is going to happen," Stempniak told NJ Advance Media. "Last year in New York I was traded and they (the Rangers) ended up winning the President's Trophy. Things happen and they're sort of out of my control. I really hadn't thought about this at all until I was asked the last two days. So it's not weighing on my mind very much.”

The Devils are currently tied with the Pittsburgh Penguins for the final wild-card spot in the Metropolitan Division and as NJ.com’s Rich Chere suggests, the team might want to keep Stempniak for the playoff push or move him if there is an offer GM Ray Shero can’t refuse.

Stempniak says he would like to remain in New Jersey, but concedes he has no control over the decisions management makes for the better of the club.

"I would like to stay, but I have no idea what's going to happen,” he said. “A lot can happen in the standings over the next month and you never know what direction Ray (Shero) is going to take with the team."

If the Carolina Hurricanes fall out of the playoff race this February and become sellers, then general manager Ron Francis might be interested in shopping around veteran defenceman John-Michael Liles, according to Chip Alexander of The News Observer.

The 35-year-old American is making $3.875 million this season and will be an unrestricted free-agent on July 1. He is one of eight Hurricanes that will be UFAs this summer including Eric Staal, Kris Versteeg and Cam Ward.

Carolina is currently three points behind the Pittsburgh Penguins for the second and final Wild Card spot in the Eastern Conference.

Liles, who has playoff experience with the Colorado Avalanche and Toronto Maple Leafs, has netted five goals and added seven assists with a minus-4 rating over 51 games in 2015-16. This is his second full season in Raleigh after the Leafs traded him to the Hurricanes in early January 2014.