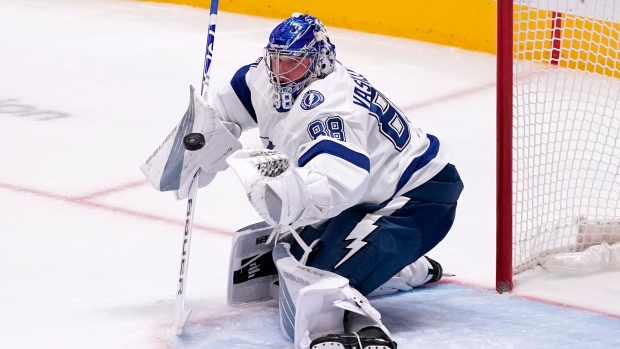 With the Stanley Cup back home in Tampa Bay, organizations have turned their attention to a major milestone in the hockey off-season calendar – the approaching NHL Entry Draft on July 23, 2021.

There are at least two interesting wrinkles with this year’s draft class. The first is a relative consensus of higher uncertainty surrounding prospect evaluation, the byproduct of less scouting and intermittent league schedules borne from the pandemic.

The second is a fascinating Swedish goaltending prospect in the form of Jesper Wallstedt.

Wallstedt – playing with Luleå HF in the Swedish Elite League as an 18-year-old – has emerged as the best goaltending prospect of the class. It should be noted that Edmonton Oil Kings netminder Sebastian Cossa is close behind Wallstedt and is also projected to be selected in the top half of the first round, which would make this an extraordinary draft year for goaltending prospects.

Wallstedt has always played above his age group through his developmental years, and his first taste of high-level professional competition saw him turn in a 90.8 save percentage in the 2020-21 season.

At last check-in with TSN’s Bob McKenzie, Wallstedt was ranked 10th on the draft board, opening up the door for the possibility of a team using a high draft pick on a goalie.

Teams have been increasingly gun-shy around goaltenders for a while now – less likely to use valuable picks on them, and certainly less likely to offer lucrative contracts to them when they are active NHL players.

Though every team wants to get their hands on the next Connor Hellebuyck or Andrei Vasilevskiy, most are looking for successful goaltending tandems that are also friendlier against the salary cap, preferring to use important capital on skaters whose performance may be more predictable long-term.

On Sunday, I was following along an interesting conversation about the possibility of the Ottawa Senators (selecting 10th overall) using their pick on Wallstedt. It’s a fascinating idea, perhaps more so in the light of Matt Murray’s struggles in Ottawa this season. TSN’s Shawn Simpson rightly pointed out that the organization shouldn’t be cautious drafting a goaltender (and a position of need) in this window for two reasons: he may be the franchise cornerstone you are looking for, and other players present risk as well.

The second part of that argument is worth exploring because it flies in the face of what organizations have increasingly done at the draft. One of the big reasons we have seen teams shy away from drafting goaltenders (and perhaps more specifically, drafting goaltenders high) is that the opportunity cost is extraordinary. You aren’t just fighting the possibility of a certain goaltender developing or busting early; you are also fighting the math of what else you could have done in that spot.

And here is the math problem for goaltenders, simple as it may be. It’s awfully tough to crack an NHL roster as one long-term. Consider eight years of draft data (2007-15) for one moment, and pay attention to the goaltender position in relation to skaters:

A big portion of the opportunity cost factor is simply a numbers game. Most NHL teams are carrying 13 forwards and seven defenders over the course of the season, with any number of call-ups to displace them due to injuries or performance.

On the other hand, most NHL teams will only use two or three goalies over the course of the year. Organizations know this, which is why only 10 per cent of draft picks are used on goalies, a number that’s been consistent in the modern era (post 2007).

Here’s a second factor. Universally, the hockey community – front offices, coaches, fans, you name it – have a better relative understanding of talent at the skater level than at the goalie level. (Significant data limitations and the effects of team structural play in front of goaltenders are surely two of the biggest reasons for the lack of clarity.)

Let’s increase our threshold to look at regulars only – guys who were drafted and have made a long-term impact (playing more than 50 per cent of future regular- season games from the time of their draft year for skaters, and just 25 per cent for that of goaltenders, a lower bar to clear due to longer developmental time). Then, let’s break it out by draft pick value: 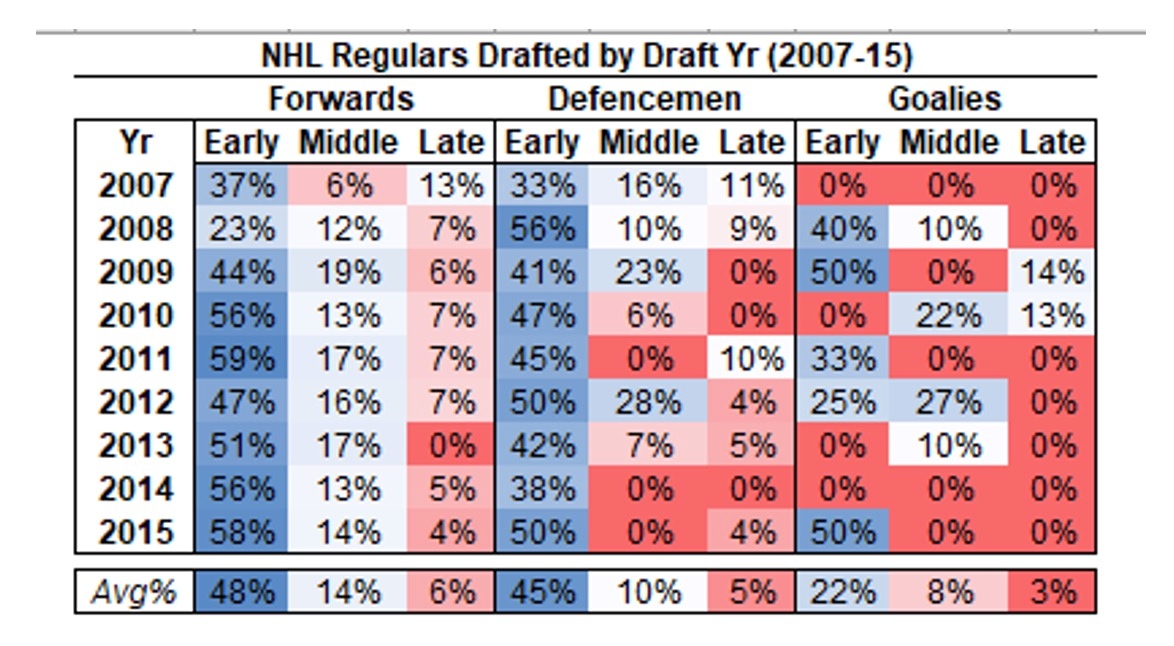 For forwards and defenders, you basically have a one-in-two chance of a first- or second-round pick becoming an NHL regular player. Compare that to the likes of goaltenders, where you have a 1 in 5 chance of that occurring.

But sometimes examples are better than the data. Let’s look at the 35 goalies selected with premium picks over the 2007-15 timespan. You will note that 25 per cent of goalies taken in this range have still yet to play a game. So, what makes up the rest of the group? 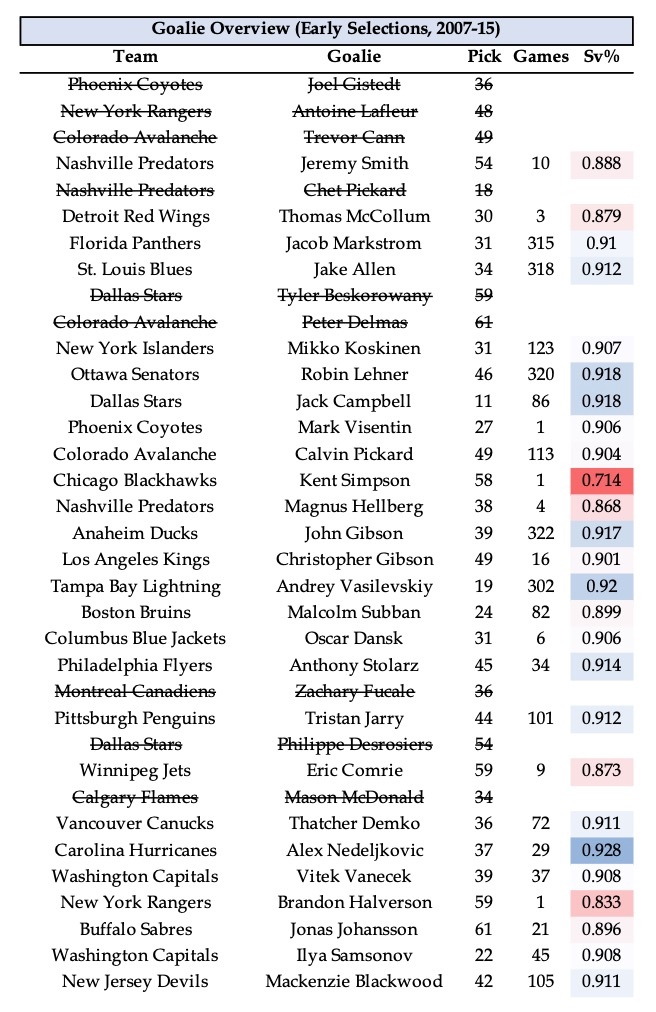