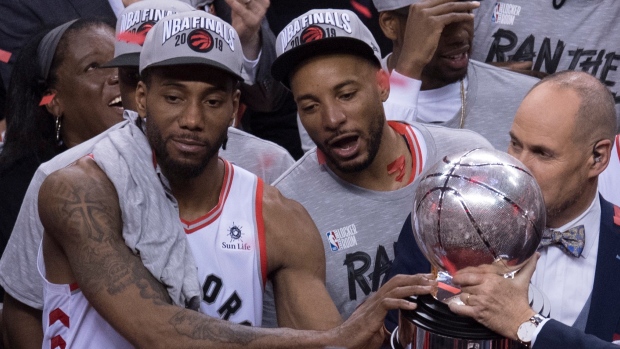 TORONTO (May 27, 2019) – Following Saturday’s series-deciding victory over the Milwaukee Bucks, the Toronto Raptors are set to make their first NBA FINALS appearance in franchise history, as they take on the defending champion Golden State Warriors. TSN’s extensive live coverage of the NBA PLAYOFFS continues, as Canada’s Sports Leader today announced its broadcast schedule for the NBA FINALS. TSN’s coverage tips off with Game 2: Golden State @ Toronto on Sunday, June 2 at 8 p.m. ET on TSN. TSN and TSN Direct subscribers can stream all of the action live on TSN.ca and the TSN app.

To set up the series before Game 1 tips off, TSN will air ESPN’s NBA FINALS Preview Show on Tuesday, May 28 at 7:30 p.m. ET. The network also has live coverage of Media Day on Wednesday, May 29 from noon – 2:30 p.m. ET, with encore coverage in the evening. TSN will also be airing ESPN coverage of the following shows, which will be taking place on-site on NBA FINALS game days:

The Raptors and Warriors squared off twice this season, with the Raptors winning both games. TSN takes a look back at the season series this week, as the network will air the instant classic November 29 Raptors home overtime victory tonight (7:30 p.m. ET on TSN) and twice tomorrow (3 p.m. ET and 9:30 p.m. ET on TSN2), with the December 12 victory in Oakland airing tomorrow as well (7 p.m. ET on TSN2).

Additionally, CTV2 will simulcast ABC’s coverage of Games 2, 4 and 6.

SPORTSCENTRE provides highlights, features, analysis, and interviews throughout the entirety of the NBA FINALS, with daily news updates focusing on the Raptors.

TSN’s complete coverage of the NBA FINALS also extends across its digital platforms with breaking news, scores, stats, schedules, interviews, and more alongside a slate of content including: