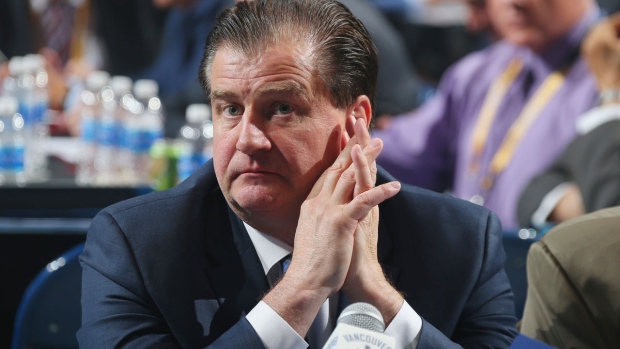 With the 2020 NHL Draft approaching, TSN Hockey provides a draft primer for each of the seven Canadian NHL clubs. Today, we conclude with the Vancouver Canucks.

2019 REVIEW
No. 10 overall pick Vasily Podkolzin has already scored his first KHL goal of the season, but his greatest long-term contribution to Vancouver will likely be as a high rpm player. He could be to the Canucks’ talented lineup what Zach Hyman is to Toronto’s. And don’t let Nils Hoglander’s three lacrosse-style goals from 2019-20 fool you – the No. 40 overall pick is going to be more energetic in the NHL than consistently highlight reel worthy. Make no mistake about it, though, those goals were something to behold. Finally, No. 195 overall pick Aidan McDonough emerged from draft obscurity to collect 27 points in 31 games and earn freshman of the year honours with Northeastern in 2019-20.

GRADING THE LAST 5 DRAFTS
The Canucks just miss earning straight A’s from TSN Director of Scouting Craig Button for their performance at the draft since 2015. Only the 2016 draft class, headed up by No. 5 Olli Juolevi, doesn’t earn top marks from Button. A reminder of the first-year impact of the big three: Brock Boeser was second in rookie goals (2017-18); Elias Pettersson was first in rookie goals, assists and points (2018-19); and Quinn Hughes was first in rookie assists and points (2019-20). 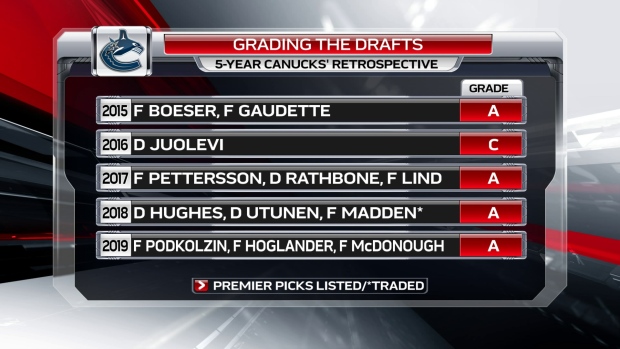 CANUCKS' STORYLINE
Vancouver is the only team in NHL history to draft players who would go on to be rookie of the year finalists three consecutive seasons: Boeser (2018), Pettersson (2019) and Hughes (2020). Additionally, the Canucks are the first team in nearly half a century to produce Calder Trophy finalists three straight years. The last teams to boast such a record were the New York Rangers (1969-71) and Boston Bruins (1966-68). 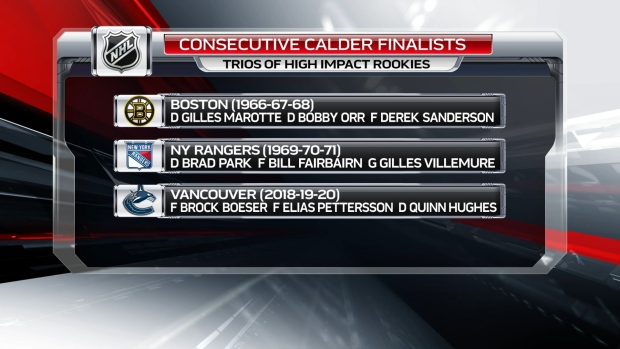 CANUCKS' TOP 10 PROSPECTS: GRADE A-MINUS
We said it when the Canucks drafted Podkolzin and Hoglander and we’ll say it again: they are exactly the kind of hard-driving players Vancouver needs to complement its complement of high-skill players. Ready-to-play Brogan Rafferty was the third-highest-scoring defenceman in the AHL for Utica and Jack Rathbone averaged more than a point per game with Harvard this past season. 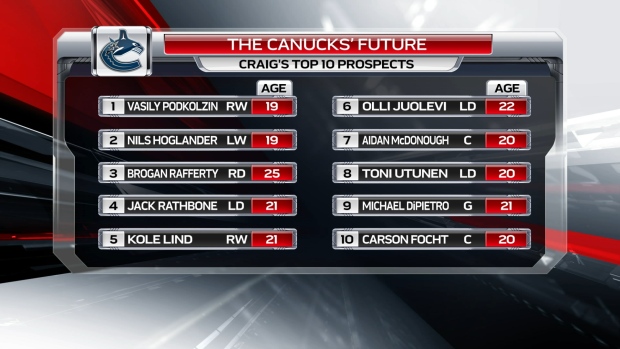 2020 LOOKAHEAD
The Canucks do not have picks in the first or second rounds as the result of trades for J.T. Miller and Tyler Toffoli, respectively. Both made impacts, Miller as the Canucks’ leading scorer in the regular season and playoffs and Toffoli, as a sparkplug down the stretch, contributing 10 points in 10 games. The only other time in team history Vancouver has not had first- and second-round picks in the same draft was in 2010. The Canucks do have five picks from the third through seventh rounds. Vancouver has shown the capacity to get top-level NHL prospects from the third round down: the traded Tyler Madden (third, 2018), Rathbone (fourth, 2017), Adam Gaudette (fifth, 2015) and McDonough (seventh, 2019).

POLL RESULTS
Vancouver is the only Canadian team without a first-round pick, so we couldn’t poll fans on who they think the Canucks should select. We asked, instead: Which team will end the Canadian Stanley Cup drought, which stretches back to Montreal’s triumph in 1993? Your choice: The Canucks with 31 per cent of the vote.

Which team will end the Canadian Stanley Cup drought?

CRAIG'S CHOICE:
Vancouver is positioned to be the first Canadian team in nearly three decades to win the Cup; The Canucks have high-end position players already on the roster, critical complementary players in the pipeline and an emerging, cost-saving alternative to Jacob Markstrom between the pipes in Thatcher Demko.