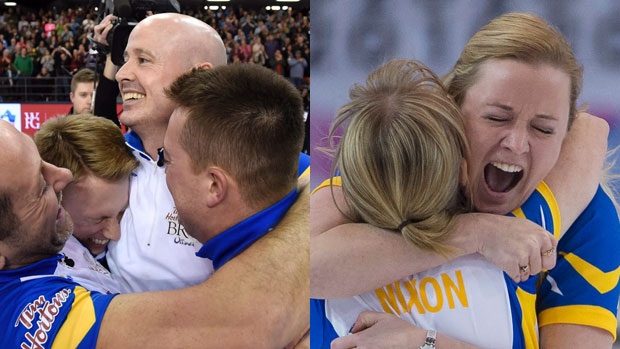 Curling has returned to clubs and rinks across the country and the world as the 2016-17 season is underway. TSN's Season of Champions kicks off on Nov. 30 with the Home Hardware Canada Cup from Brandon, Man, but there's still plenty of rock throwing to keep up to date with until then. With that being said, TSN's curling experts Vic Rauter, Cheryl Bernard, Russ Howard, Bob Weeks and Cathy Gauthier are here to make their picks for this season's Scotties Tournament of Hearts, Tim Hortons Brier, the World Curling Tour money winners as well as the qualifiers for the 2017 Canadian Olympic Trials.  Do you agree with what they have to say?

This is heart ruling the head. Just imagine Gushue winning on home soil. The Rock would be a rockin. They would carve his face into the cliffs at Mile One... Mount Gushue.

If it’s true you have to lose and learn before winning, then it’s her time to shine.

He's going to be like St. Niklas and walk off with a big bag of cash.

It’s all about Eve as she gears up for the 2018 Olympics in South Korea.

Biggest Storyline/Most Excited to See: The game…the people…the players... my colleagues... the roar of the crowd...the crashing of stones. The results are the story and how we get there is the journey. I can’t wait.

Jacobs and his crew went 11-0 at last year’s Brier against arguably the best field in history. The new brushing rules will bring the game back to the shot makers and third Ryan Fry as well as Jacobs are two of the best in the business.

Team Homan was putting together possibly the best season in history last year before it was spoiled by a surprising provincial final loss. They will be hungry in 2016-17. It will likely take Team Jennifer Jones some time to recharge after the birth of Jennifer and Brent Laing’s second child, opening the door for Homan’s crew to win some early events.

The best team in the world last year will try to send a message that you will have to go through them if you want to be an Olympian.

The foursome won last year’s WCT money title by miles and it should be no different this time around. Cash spiels are a driving force for this team.

Biggest Storyline/Most Excited to See: Excited to see how the teams adjust to the new brushing rules. The new regulations will frustrate teams because they can't manipulate the rock as well as last year and the best throwers will have the advantage again…as it should be.

An automatic bye into the Canadian championship is a good start to win another Brier. In their two years together, we’ve seen them get better and better and I think that was only the tip of the iceberg. The key is that they want to continue to improve. They have another gear or two!

With their Trials spot secured and a disappointing result at the Ontario Scotties last year, Team Homan will be fired up and focused on the task of winning their provincials and making a run for a Scotties Championship. That and the fact that they will be on arena ice at their provincials gives them the advantage over many teams that may not get access to arena ice as often. Scotties Focus!

If you looked at their WCT tour placement last year (9th) you would think they had a disappointing year. However watching them play all year, they were always in the hunt. It wasn’t a decline in execution that landed them in ninth place, but they were just simply on the wrong side of the inch and many games could have easily ended with a win. Maybe a bit of post-Olympic burnout or lack of focus after a grueling 2014-15 season or even being distracted with the sweeping changes at the beginning of last year. But no matter what, we will see the “Gold Medal” Team Brad Jacobs win the tour this year.

With Jones and Homan already on the Trials list, Sweeting is the next in line and the hungriest to secure a spot. The third year together for this team will be a charm. They have worked out the kinks that all new teams have, they have great chemistry and they are one of the hardest working teams on tour. Hard work pays off!

Biggest Storyline/Most Excited to See: The combination of Jim Cotter and John Morris should be interesting to watch. I love these guys together and the energy they have as a team. They have a great opportunity to get out of BC and then when the Morris “effect” kicks in at the Brier…lookout! On the women's side, Heather Nedohin’s national championship third Beth Iskiw, joined forces with Saskatchewan's Stefanie Lawton and she brings experience and a great calm to the house. She will be great for Stef. I’m also exited to keep an eye on Kerri Einarson, who had a breakout campaign in 2015-16, as well as Alberta's Charley Thomas, who could contend to win the Alberta title.

I know it would be a great story if the other Brad won, but I think this team will have a strong season and shine at the right moment.

This team is maturing and getting better and better each year. I think they're hungrier coming into this year than in the past.

Always been a big money player, so why should things change this year?

She finished strong last year and should pick up right where she left off this year.

Biggest Storyline/Most Excited to See: Tim Hortons Brier on the Rock, the end of the Broom Wars and mixed doubles events.

This guy can’t get any closer without stepping to the top of the podium. The setting is perfect for Brad and the boys. For once, they will not be taking three planes to get to the Brier and they will have the complete support of the hometown crowd which I expect they will feed off in a big way. He is going to be hard to beat in St. John’s unless time management gets in the way. It will be like an Olympics for Gushue in St. John’s - everyone will want a piece of him and dealing with the off-ice pressure will be a big factor if they are to succeed.

Not being at the show last year must have been the toughest week in the season for Rachel and the team. They will not make that mistake again and will be even more focused. Knowing the Scotties is in their home province makes getting back that much sweeter. Once she is at the Scotties, she has the experience and the drive to get to the second Sunday. Finding ways to maximize the time this team is together will be a learning process, but by February, I suspect they will be in the groove.

The pressure is off for this team. They have punched their ticket to the Brier in Newfoundland. They have earned a spot in the Olympic Trials. So that means this season can be about choosing the right events at the right time without the worry about fatigue leading to the Playdowns schedule…that white noise all the other teams have to contend with if they are going to make it to Newfoundland in March. This is an opportunity for a BIG money season for this team.

For Val and the group, they know that Chelsea Carey will not be in their provincial Playdowns this year. That is one motivation, but another is they are aware that the 2018 Olympic qualification process includes CTRS leaders for 2015-2017 (two year total) and 2016-2017 (one year total) as well as the runner up this season. If you are going to go on tour, this is the year.

Biggest Storyline/Most Excited to See: I’m most excited about once again watching the players have the results be dictated by how they throw the rock rather than what the fabric on the brooms can do to the rock.  Hard work and ability to put the broom in the right spot and hit the target is what this game is supposed to be about and I look forward to that happening again this season.

And of course I am looking forward to listening to Russ try to explain what a front end does. You DO know Rusty that people like us made people like you champions, right?