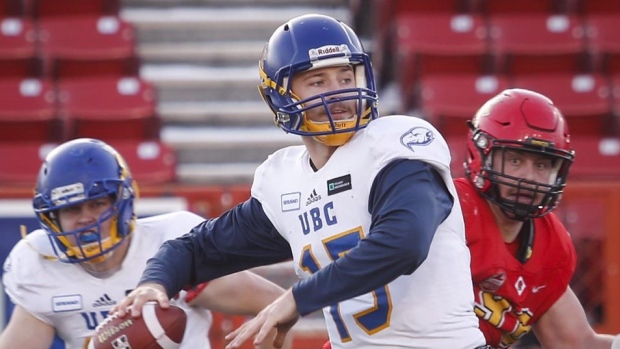 After going undrafted in the 2019 NFL Draft, former University of British Columbia quarterback Michael O'Connor will attend the Seattle Seahawks' rookie mini-camp next week, according to TSN's Farhan Lalji.

O’Connor, who stands 6-foot-5 and weighs 235 pounds, threw for 3,131 yards 17 touchdown against just five interceptions last season with UBC. After working out in front of NFL personnel ahead of the draft, it was thought that the Orleans, Ont., native could potentially be selected by a team over the three-day event.

O’Connor is not the only Canadian who has inked a mini-camp invite. According to Lalji, wide receiver Justin McInnis of Arkansas State Univerisity, who hails from Pierrefonds, Que., will attend mini-camps with the Indianapolis Colts and the Tennessee Titans. McInnis recorded 748 yards and five touchdowns on 61 receptions with last season.

Wide receiver Brayden Lenius-Dickey of North Vancouver, B.C., who played the first three years of his collegiate career with the University of Washington before playing last season with New Mexico, has accepted an invite to San Francisco 49ers mini-camp.

And the Kansas City Chiefs have invited Canadian offensive lineman Maurice Simba to their rookie mini-camp. The University of Concordia, who Simba played for three years, announced the news on Twitter.

🐝🏈 The big man is getting his shot.

All five players could still end up being selected in Thursday's CFL draft. In the final edition of the CFL Scouting Bureau's rankings, McInnis was the third-ranked prospect, Simba was ranked 13th, and O'Connor was ranked 17th.