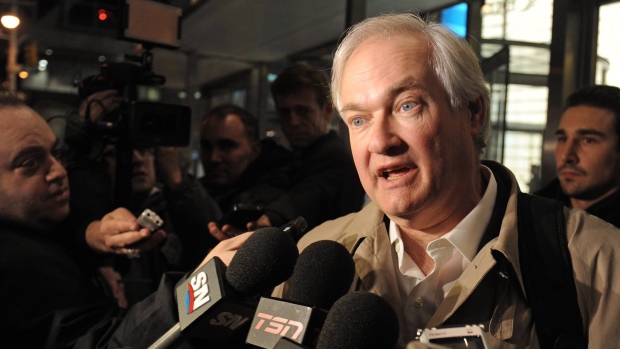 A lot has changed in the weeks since Gary Bettman left an NHL Board of Governors meeting in early December and suggested next season’s salary cap upper limit might be $73 million, up from $69 million this season.

“I have an idea of how it might affect the cap. It’s not as much as people are suggesting,” NHL deputy commissioner Bill Daly told TSN. “You also need to understand that (hockey related revenue) and cap numbers are all a product of year-long averages, not snapshots in time.”

Asked whether the dollar’s decline could push down the salary cap by a few million dollars, Daly said, “I don’t expect it to be nearly that much."

The NHL had anticipated that revenue in 2015-16 might eclipse $4 billion. To understand how changes in the value of the Canadian dollar might impact league-wide revenue, you’d need to have a clear understanding of how much income the league generates in Canada.

Canadian team ticket sales account for about 11 per cent of overall league income and the NHL’s new $5.2 billion TV deal with Rogers - worth $433 million a year - is another 11 per cent. Then there’s Canadian corporate sponsorships, local broadcast contracts and other income, such as licensing deals.

Sports banking officials who have worked on NHL team finances say at least one quarter of the league’s overall income comes from Canadian sources.

There’s another pressure that could also drive down the cap next season.

When Bettman predicted the $73 million cap, he was likely assuming that the NHLPA would, as it has done consistently in past years, opt to trigger a five per cent cap inflator.

Pushing the overall salary cap limit higher drives up the amount of money available for potential free agents - bad news for a spartan free agent class this summer that’s headed by Martin St. Louis - but it also leads to higher escrow collections for all players.

“Players are worried about paying additional escrow,” Ian Pulver, a former NHLPA executive and current player agent said in an interview. “It’s a vicious cycle. Over the course of 10 years, players have voted to increase the cap, to ride with increasing revenue.”

Pulver said it would be a mistake not to trigger the escalator clause.

"Because there are a couple of bumps along the way shouldn’t mean the players shouldn't continue to increase the cap and force the major players — the NHL, the clubs and the NHLPA - to grow revenues. To vote against the increase of the cap because of a fear of escrow runs counter to the collective good and common sense."

Last summer offered a glimpse at the angst players are feeling when they voted on whether to include the revenue from the league’s new $5.2 billion contract in this season’s cap.

But then NHLPA executive director Don Fehr called for a second vote, a source told TSN, and the players agreed that half the value of the TV deal would be included. That boosted the cap limit by about $1 million.

Since then, Pulver and other agents say players have remained upset over the high escrow that’s withheld from their pay checks. This season, 14 per cent of player salaries are being withheld until the season’s final revenue figures are established.

“Given that the value of player contracts is, and has remained, less than the full face value of their contracts over the last few seasons, players will certainly discuss over the next few months whether to continue to maintain the five per cent growth factor every year,” NHLPA spokesman Jonathan Weatherdon wrote in an e-mailed statement. “This will allow the executive board to make its decision with the benefit of a full discussion of the issues by the players."

There’s a real chance players next summer will vote down the five per cent escalator, which, combined with the plummeting Canadian dollar, could mean a salary cap that peaks at closer to $70 million.

The issue of the cap escalator will be a main topic of discussion when Fehr makes his tour of Toronto, Montreal, Chicago, New York and Los Angeles during the second half of the season to meet with player agents.