Everything about his equipment was typical for a game day, except for his skates.

Kylington, who was born in Sweden and whose mother is from Eritrea, a small country in northeast Africa, had been approached by the league to wear skates paying tribute to Willie O’Ree, the first Black player in league history, during Black History Month.

Kylington received his skates this week and wore them in Wednesday’s game as the Flames lost 2-1 in overtime to the Maple Leafs. 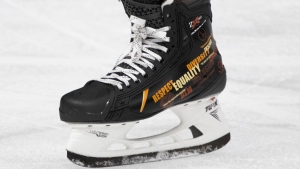 The custom skates, which were made by Bauer Hockey, depict an image of O'Ree on one side as well as the Hall of Famer’s autograph, the date he made his NHL debut with the Boston Bruins (January 18, 1958) and the phrase “All I needed was the opportunity.”

The other side of the skate includes several words such as “Respect,” “Equality” and “Diversity” while his jersey number (22) is stamped on the back of the skate.

“I was just happy to have them on,” the 23-year-old Kylington said after the game.

“Obviously, with new skates they’re a bit tough to get into but besides that, it was an honour to wear them and it’s a good look, too. It was exciting.”

Several NHLers have worn the skates during Black History Month, including Chicago Blackhawks star Patrick Kane and Florida Panthers forward Anthony Duclair. The skates will be auctioned off, with proceeds going to Black Girl Hockey Club, an American nonprofit dedicated to making the sport more inclusive.

By playing in the NHL, O’Ree inspired other visible minorities that they, too, could pursue the sport and ascend to its highest level. For Kylington, that role model is former NHL defenceman Johnny Oduya, who is also Swedish and has Kenyan roots. Oduya had an 850-game NHL career with stops in New Jersey, Atlanta, Winnipeg, Chicago, Dallas, Ottawa and Philadelphia.

Oduya and Kylington, who are 16 years apart in age, were introduced to one another by Kylington’s father several years ago and formed an instant bond. Their relationship has evolved beyond simply mentor-protégé, with Oduya considered family by the Kylingtons.

“He’s like a big, older brother for me,” Kylington said. “I’ve known him since I was a kid. He’s been there since Day 1. He’s a guy that I lean on and someone that’s been impactful in my career on and off the ice. He’s been a guy I looked up to as a kid and now having that relationship with him, you build a strong connection.

“Obviously, he had a good career in the NHL, so he’s a good guy for me to bounce ideas off and elevate my game. He was, for sure, my hero when I was a kid.”

This season, the NHL has implemented several other diversity-related initiatives, including funding for different grassroots hockey programs.

Kylington is hopeful that the sport will evolve even further as it attempts to become more welcoming to different communities.

“Obviously I want, in the future, different ethnicities playing in the NHL and having people with different backgrounds seeing that it’s possible to make it,” he said. “Just for them to see that you can make it to the NHL if you work hard, that it doesn't matter what you look like or what skin colour you have. Anything is possible.”

And what about the possibility that young hockey players who are from minority groups will now look at Kylington the same way he once glanced at Oduya?

“I’m just trying to lead by good example, prepare, and do my best as a hockey player,” Kylington said.