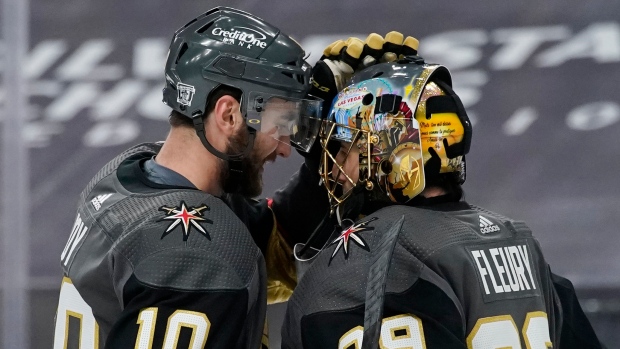 LAS VEGAS — Nic Hague and William Karlsson each had a goal and two assists as the Vegas Golden Knights returned to action after being sidelined due to COVID protocols and beat the Los Angeles Kings 5-2 Friday night.

Vegas was playing for the first time since Jan. 26 after being shut down due to the NHL’s virus protocols. The Golden Knights, who took a 5-0 lead in the game, showed no signs of rust for a team that hadn’t played and practiced just twice.

Hague opened the scoring 50 seconds in with the game’s first shot. Mark Stone and Jonathan Marchessault followed with goals 62 seconds apart later in the period.

“I felt we had great energy this morning,” said Vegas coach Peter DeBoer, who returned from quarantine at Friday’s morning skate. “Reports from coaches were the guys were really dialed in and really working hard. You’re always surprised you’re up 5-0 in this league — that’s a rarity — but I wasn’t surprised with our energy to start.”

Cody Glass also scored for Vegas, while Marc-Andre Fleury improved to 4-0-0 after making 27 saves. Fleury, who has allowed just five goals in his first four starts of the season, ranks second in the league with a 1.25 goals-against average and third with his .944 save percentage.

Hague’s three points were a single-game career-high, while Karlsson registered his 100th and 101st assists as a Golden Knight.

“Good defence leads to offence, and if we’re able to break pucks out quickly and generate odd-man rushes and then for our D, we always talk about getting up in the play,” Hague said. “That’s how I scored tonight, just tried to go up and be in that second layer and the puck finds me there.”

Austin Wagner scored his first goal of the season for the Kings, while Dustin Brown scored his fourth, all on the power play. It was Brown’s 100th career power-play goal, as he passed Butch Goring and took over sole possession of seventh on Los Angeles’ all-time scoring list with 661.

Vegas’ efficiency was off the charts in the first 20 minutes, as it scored three goals on four high-danger chances, nine shots on goal, and 11 scoring chances.

“Their speed overwhelmed us early, that’s pretty evident,” Los Angeles coach Todd McLellan said. “The transition from offence to defence and their defencemen jumping into the rush. Our D handling anything outside with any type of pace, we did a poor job. It took us quite a while to adapt to it and by then it was too late.”

The Golden Knights waited a little longer to attack in the second period, this time striking 95 seconds in. Karlsson took a two-line pass from Marchessault, waltzed into the zone, and beat Quick with a wrist shot that ended the night for Los Angeles’ starter on the first shot of the period.

Later in the second, Glass welcomed Peterson to the game when he punched home a rebound during Vegas’ first power-play opportunity of the contest.

Wagner and Brown scored their goals in the third period, ruining Fleury’s bid for back-to-back shutouts.

The Golden Knights improved to 52-1-3 when scoring four or more goals at home.

Rather than lead Vegas onto the ice for warmups, as all starting goaltenders do, Fleury was second after Dylan Coghlan made his ceremonial solo lap to commemorate his NHL debut.

Los Angeles defenceman Austin Strand also made his NHL debut, while forward Martin Frk sustained a lower-body injury during the second period and did not return. McLellan said he hadn’t checked in with team trainers, but it “didn’t look good. I’m sure he’s going to be out for a while.”

While Vegas’ coaching staff is close to being at full strength, its top defensive pair is still on the mend. Alex Pietrangelo remained in the NHL’s COVID protocol and missed Friday’s game, while his partner on the blue line Brayden McNabb is on long-term injured reserve with a lower-body injury.

Vegas and Los Angeles close their two-game series at T-Mobile Arena in a matinee clash on Super Bowl Sunday.