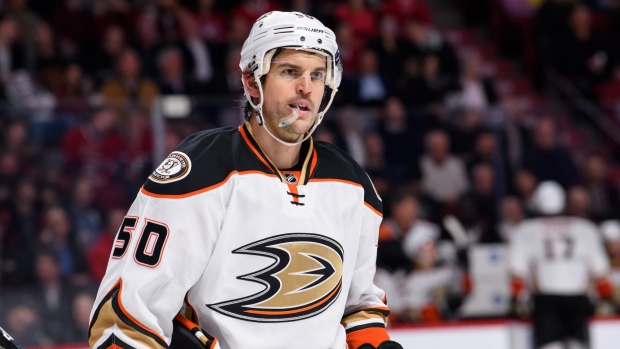 Vermette slapped his stick against the back of linesman Shandor Alphonso's legs after losing a faceoff to Minnesota Wild captain Mikko Koivu during the third period of the Ducks' 1-0 win Tuesday night.

Vermette had a disciplinary conference call with the league and the players' union Wednesday, with the NHL confirming Vermette will receive a 10-game suspension under league rules for applying physical force to an official without intent to injure.

Vermette will appeal the suspension, according to TSN Hockey Insider Bob McKenzie. NHL Commissioner Gary Bettman will hear the first appeal, followed by an independent arbitrator.

The normally mild-mannered Vermette appeared to act out of frustration when Alphonso dropped the puck before the forward had put his stick in place on the ice.

The officials immediately stopped the game and assessed a game misconduct to Vermette, who has been among the NHL's best faceoff men this season. Vermette has won 62.4 per cent of his 985 draws, the best percentage in the league among all players who regularly take faceoffs.

Vermette isn't known as much of a hothead, and he had been enjoying steady success in his first season with the Ducks, who signed the 34-year-old veteran to a two-year deal in August. Along with his remarkable faceoff proficiency, the 2015 Stanley Cup champion has contributed eight goals and 14 assists in 58 games.

After the game, Anaheim coach Randy Carlyle said he thought Vermette hadn't acted maliciously, but had been trying to get Alphonso's attention after what he viewed as an unfair faceoff. Alphonso is a former OHL player in his first full season as an NHL linesman.

If Vermette immediately serves his entire 10-game suspension, he would be out until the Ducks have just 14 games left in their regular season. He would be eligible to return for Anaheim's visit from the Washington Capitals on March 12.

Vermette's misbehaviour is the latest instance of official abuse in the NHL, but not the most dramatic in recent history. Last season, Calgary defenceman Dennis Wideman managed to get his 20-game suspension reduced on appeal after he cross-checked linesman Don Henderson from behind.

Wideman was given an automatic 20-game suspension for deliberately attempting to injure an official, and Bettman upheld it before a neutral arbitrator decided Wideman's action hadn't been intentional and reduced the ban to 10 games.

The arbitrator ruled that Wideman's suspension should be halved, but Wideman had already served 19 games of the ban. He was refunded his lost salary for the difference.