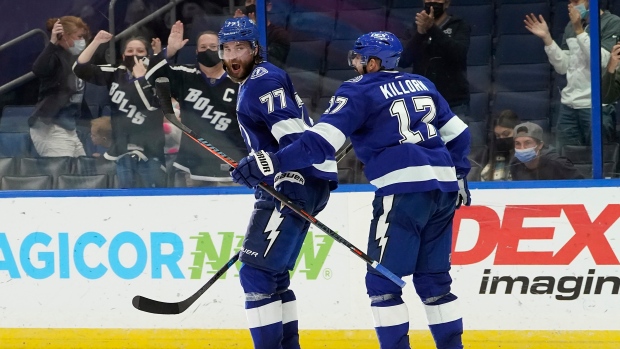 TAMPA, Fla. — Victor Hedman scored 54 seconds into overtime to give the Tampa Bay Lightning a 3-2 victory against the Florida Panthers on Thursday night.

The Lightning remained tied for first place in the Central Division with Carolina, though the Hurricanes have a game in hand. Florida is one point back.

Andrei Vasilevskiy made 36 saves for his NHL-leading 26th victory of the season and added an assist. Alex Killorn had a goal and an assist. Ross Colton also scored for Tampa Bay, which bounced back from a 7-2 loss Tuesday in Nashville.

“We leaked a little bit but our thought process and some of the things we have been working on, we did well at times and struggled at others,’’ Lightning coach Jon Cooper said. “But we were down 2-1 (in the third period) in a big-time game, two pretty good hockey teams, and you find a way to tie and then win it in overtime and that’s where I really liked our attitude on the bench.’’

Chris Driedger stopped 16 shots for the Panthers. Patric Hornqvist and Anthony Duclair scored for Florida, which has one win in the past four games.

“I think we had a pretty solid game all around, all four lines played pretty good, we had solid goaltending,’’ Duclair said. “We came up short but I think there are a lot of positives to take out of this game. It’s always going to be a grind against these guys, but I think we did a great job of sticking with them.’’

Hedman got his eighth goal of the season, sent in on a breakaway by Killorn. Hedman deked Driedger down and slipped the puck inside the post.

“Killorn did a good job and passed it at the right time to give me the breakaway,’’ Hedman said. “I tried to have some patience on the breakaway and I was able to find the back of the net.’’

Hornqvist put the Panthers in front in the opening period, cutting toward the net on a pass from Alex Wenneberg and slipping a backhand past Vasilevskiy at 15:13.

After being outshot 13-4 in the first period, Tampa Bay pushed back in the second and cashed in on the first power-play opportunity of the game. With the Panthers making a change, Vasilevskiy came out of his crease and fed a pass up ice to Killorn for a 2-on-0 rush. Killorn tried to send a pass over to Anthony Cirelli, but the puck went into the net off the stick of Florida defenceman McKenzie Weeger at 13:28.

Florida regained the lead at 7:13 of the third after Lightning forward Yanni Gourde pinched while covering the right point. That sent Jonathan Huberdeau up ice on a 2-on-1, and he spun around to find Duclair for a one-timer.

Tampa Bay answered right back at 9:57 when Mikhail Sergachev found Colton down low on a cross-ice pass for a backdoor tap-in off the pads of Driedger.

“I liked the way we played in the third period. We had everything going our way except the finish,’’ Florida coach Joel Quenneville said. “We had some great chances tonight. I liked the balance of our lines.”

Lightning captain Steven Stamkos missed his third consecutive game and was placed on long-term injured reserve with an undisclosed lower-body injury retroactive to April 8. Stamkos, who underwent core muscle surgery twice last year, left a game in Columbus last Thursday following a non-contact play. He will miss a minimum of 10 games or 24 days.

Florida welcomed newly acquired defenceman Brandon Montour and forward Nikita Gusev to the lineup for the first time. Montour was acquired from Buffalo last Saturday for a third-round draft pick in 2021. Gusev signed as a free agent Sunday after his contract was terminated by New Jersey.

The teams play again on Saturday.