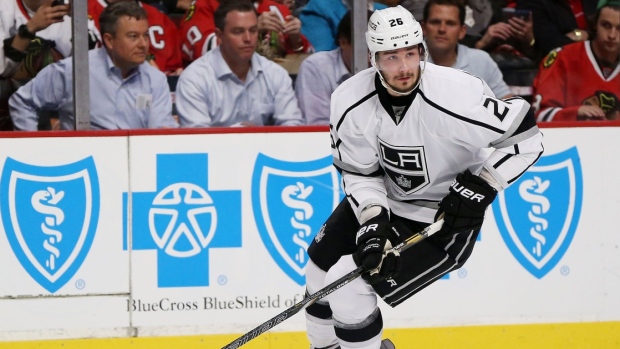 LOS ANGELES — A judge has dismissed a misdemeanour domestic abuse conviction against former Los Angeles Kings defenceman Slava Voynov, a move that could clear a path for his return to the NHL.

The judge granted Voynov's request to dismiss his conviction on Monday — over the objection of Los Angeles County prosecutors — three years after he pleaded no contest to a misdemeanour charge of corporal injury to a spouse.

Police said he punched, kicked and choked his wife at their Redondo Beach home in October 2014 after a fight that began at a party attended by other Kings players. He served almost two months in jail and voluntarily agreed to return to Russia after he was taken into custody by U.S. immigration officials.

The Kings terminated Voynov's $25 million contract in 2015 but with his conviction overturned, he can request a hearing with the NHL commissioner to apply for reinstatement.

Prosecutors opposed Voynov's request to dismiss his conviction and argued in court papers that it is "impossible to determine" whether he met all of the conditions of probation after his plea because he returned to Russia.

A doctor told the court that Voynov had completed 28 domestic violence counselling sessions but noted the couple had a "lack of emotional awareness and difficulty to communicate effectively," court documents said. The counselling, prosecutors argue, was not sufficient to satisfy the legal requirement after his plea.

Voynov played on a team composed of Russian athletes at the Pyeongchang Olympics earlier this year. His attorney did not immediately respond to an email seeking comment Monday.

Deputy NHL Commissioner Bill Daly told The Associated Press by email that Voynov's status has not changed but that he can now proceed with a petition for reinstatement.

The Kings said in a statement to The AP: "Any decision to reinstate Slava Voynov into the league is in the hands of the NHL. It is premature to comment prior to the NHL's ruling."