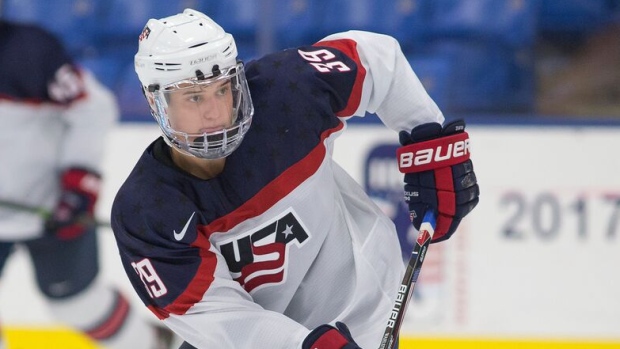 LANGLEY, B.C. — Oliver Wahlstrom scored twice less than four minutes into the game as the United States went on to down the Czech Republic 6-2 on Saturday in an exhibition tune-up ahead of the world junior hockey championship.

Phil Kemp also scored in the first for the Americans, who outshot their opponent 20-2 in the opening period and took a three-goal lead into the first intermission at the Langley Events Centre.

Josh Norris, Sasha Chmelevski and Ty Emberson also found the back of the net for the U.S. while Kyle Keyser made 19 saves for the win.

Jakub Lauko and Martin Necas replied for the Czech Republic.

Jakub Skarek started in net for the Czechs and stopped 21-of-24 shots before giving way to Jiri Patera midway through the second. Patera turned away 17-of-20 shots in relief.

Quinn Hughes picked up two assists and was part of a third-period altercation with Lauko that led to the gloves being dropped and 14 minutes in penalties, including a 10-minute misconduct.

Earlier, Nils Hoglander had a pair of goals as Sweden beat Denmark 3-1 at Prospera Centre in Chilliwack, B.C.

Philip Broberg also scored while Olle Eriksson Ek made 18 saves for the victory.

Christoffer Gath found the back of the net for Denmark, which got 27 saves from Mads Sogaard.

Canada plays Finland at Vancouver's Rogers Arena on Sunday, while Switzerland and Russia face off at Bill Copeland Arena in Burnaby, B.C., to wrap up pre-tournament action.