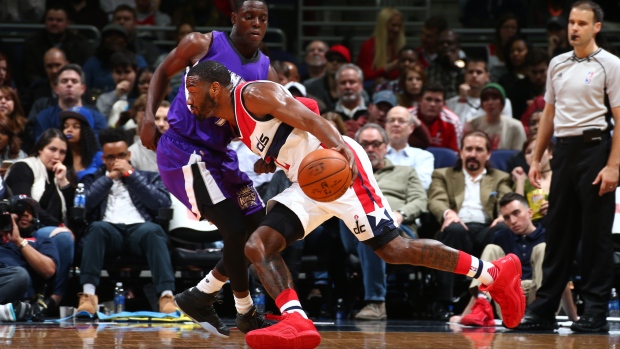 WASHINGTON - John Wall had fewer teammates than usual Monday night, yet he found more Washington Wizards than ever.

Wall had a career-high 19 assists and also scored 12 points, Marcin Gortat had 27 points and 16 rebounds and the Wizards beat the Sacramento Kings 113-99 on Monday night.

With injuries limiting the Wizards to eight players, Wall was just 4-for-15 shooting but finished with assists on nearly half of Washington's 42 baskets. He also repeatedly found the 6-foot-11 Gortat for shots near the hoop. The centre made 12 baskets — nine off of passes from Wall.

"He has to understand, when I penetrate to the basket, he's going to get the ball most of the time," Wall said. "I think tonight he was able to finish. The other night he missed a couple of easy chippies but tonight he was being more aggressive."

Gortat made Sacramento centre DeMarcus Cousins run a lot and was able to get past him. That's why Gortat came up with a lot of lay-ups or shots from in close.

"He got out and ran all night long," Washington coach Randy Wittman said of Gortat. "He had four or five lay-ups just by outrunning ... (but) we got out and ran, moved the ball. John orchestrated a lot of that."

Wittman had a short bench to work with — four players played over 36 minutes, and DeJuan Blair played just 39 seconds at the end. But six Wizards finished in double figures, thanks often to Wall's good passing.

Gortat set a new season high for points by halftime with 21 as the Wizards took a 63-59 lead at the break.

Washington led throughout much of the third quarter until the Kings finished with the period's final eight points for an 84-84 tie. The Wizards then took command by scoring the first eight points of the fourth quarter — even though Gortat was out.

"I thought we did a hell of a job until the beginning of the fourth," Kings coach George Karl said. "They went up eight on us and that fatigued us."

The Wizards outscored the Kings 29-15 in that final quarter. Overall, Cousins led Sacramento with 22 points while Rudy Gay added 16.

This is the only time the Kings come to Washington this season. The Wizards head to Sacramento on March 30.

Wall came out in the final minute being bothered by sore ribs after getting hit. He said he'll just keep getting treatment every day. "They're pretty sore (now)," Wall said.

Cousins wondered if the team could have benefited from some coaching moves when the Kings struggled, possibly in the fourth quarter when Washington pulled away. "I don't feel we made any adjustments when it was needed at the time," Cousins said. "I mean, they came out early, but we still managed to keep it a game the entire game, at least up until the end."

Kings: Former Wizard Caron Butler entered late in the first quarter and received a big ovation from the crowd. ... The Kings have not fared well in back-to-back games this season. They now are 2-12, including 0-7 in the second games.

Wizards: The team announced at game time that Gary Neal (sore back) would join the list of injured players out. Washington had six players out due to injuries — including Bradley Beal, Otto Porter, Alan Anderson and Nene. ... Even though the Wizards trailed 35-34 after one, that was the most points they'd scored in the opening quarter this season (31 had been the mark before).

Kings: On the road against the Pacers on Wednesday night.