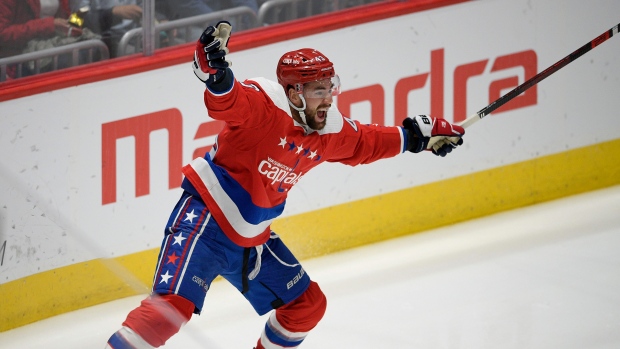 WASHINGTON — T.J. Oshie scored the go-ahead goal midway through the third period, Braden Holtby made 33 saves and the Washington Capitals beat the Pittsburgh Penguins 5-3 on Sunday to snap their losing streak at four and leapfrog their archrivals into first place.

The Capitals endured a back-and-forth, chippy game to win for just the second time in their past eight games.

Despite being outshot 36-23, Washington put together responses to some potential momentum-crushing Penguins goals. Pittsburgh's Patric Hornqvist and Sidney Crosby scored 26 seconds apart late in the second and Evgeni Malkin had a highlight-reel goal in the third that tied it.

Tom Wilson scored 76 seconds into the third to make it 2-2, two-time Penguins Stanley Cup champion Carl Hagelin put the Capitals up and Oshie shovelled the puck in on a scramble in front with 9:20 left. Pittsburgh's Matt Murray allowed four goals on 22 shots. Jakub Vrana also scored for Washington.

Theodore's winner 3:50 into OT came after the Golden Knights squandered a two-goal lead late in the third period. Mark Stone picked up his fourth assist on Theodore's goal.

Vegas' 5-3 lead appeared safe until Adam Henrique forced overtime with goals 1:42 apart. Both came when the Ducks brought on the extra attacker.

Nick Ritchie also had two goals for the Ducks, who have dropped their last two.

LOS ANGELES (AP) — Connor McDavid had a goal and two assists in his return after missing six games because of a quad injury and Edmonton beat Los Angeles.

Leon Draisaitl scored on the power play, Ryan Nugent-Hopkins had a goal and Edmonton moved ahead of idle Vancouver into second place in the Pacific Division. Mike Smith made 21 saves.

Anze Kopitar had a power-play goal, Dustin Brown also scored and Calvin Petersen made 27 saves for the Kings, who have lost three of four.

Jordan Kyrou, Brayden Schenn and Ivan Barbashev also scored for the Blues, who have won four straight and retained their spot atop the Western Conference standings.

Marcus Foligno scored and Devan Dubnyk stopped 22 shots for Minnesota, which ended a two-game winning streak. The Wild are three points out of the final playoff spot in the West going into Monday's trade deadline.

St. Louis has given up just two goals over the last four games and shut down Minnesota on four power-play chances.

BUFFALO, N.Y. (AP) — Kyle Okposo enjoyed his first two-goal game in 23 months, and Buffalo continued its playoff push with a victory over Winnipeg.

Okposo scored the go-ahead goal 7:37 into the third period and the Sabres won their fifth in six games. Rookie Jonas Johansson stopped 25 shots to earn his first victory in three NHL starts.

The Sabres' recent surge has moved them into a tie for fifth with Montreal in the Atlantic Division standings with 66 points each, and six back of third-place Toronto.

Captain Blake Wheeler scored for Winnipeg. Connor Hellybuyck finished with 23 saves to drop to 5-4-1 in his past 10 games.

The Stars’ Joe Pavelski opened the scoring in the first period.

Blackhawks rookie Dominik Kubalik tied the game in the second period on the power play.

Defenceman Devon Toews also scored to help the Islanders move within a point of idle Philadelphia for third place in the tightly contested Metropolitan Division. The reeling Sharks lost their fourth straight.

Varlamov is 19-12-4 this season, his first with the Islanders.

Andrew Mangiapane scored Calgary's last two goals, one of which came into an empty net at the end. Dylan Larkin had both goals for Detroit.

The Flames are in a tight race for the final post-season spots in the Western Conference, and the five-game trip they began Sunday could be crucial.