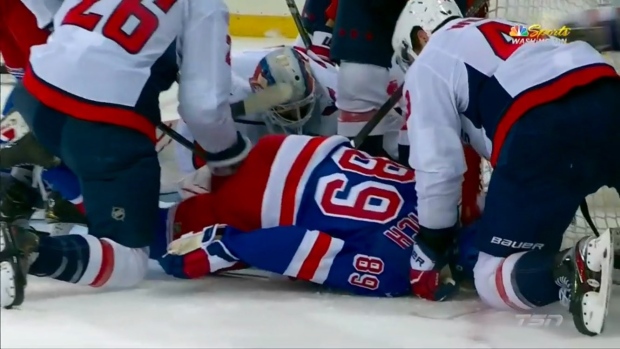 The incident occurred when Buchnevich got tangled up in front of the Washington net and fell to the ice after referees blew the whistle. Wilson, who fell to his knees next to Buchnevich, appeared to deliver a punch to the Rangers forward's upper back while he lay face down on the ice, which caused tempers to flare.

Washington’s Tom Wilson has been fined $5,000, the maximum allowable under the CBA, for Roughing NY Rangers’ Pavel Buchnevich.

As a brawl broke out between the two teams, Artemi Panarin skated in to pull Wilson away. As the two got free from a crowd of bodies, Wilson hurled Panarin -- whose helmet had come off -- to the ice and delivered a pair of punches while the Russian superstar lay on his back. Wilson threw Panarin down once again as he tried to stand up before officials came in to break things up.

Wilson received two minor penalties for roughing and a 10-minute misconduct, while Buchnevich was also given a two-minute roughing penalty. The Capitals went on to win the matchup 6-3.

Panarin, who did not play another shift in the second frame, was ruled out for the remainder of the game with a lower-body injury.

Rangers head coach David Quinn told reporters after the game that he expected Panarin to be okay but had some choice word's for Wilson's antics.

"There are lines that can't be crossed in this game... To me, it's just zero respect for the game, in general. You get one of the star players in this league now, who could have got seriously, seriously hurt in that incident," he told reporters.

“I thought it was just a scrum, like a physical play,” Laviolette said. “There was something going on originally with the goalie and they’re jamming at the goalie and a bunch of players jump in there. It happens a lot.”

Wilson received his fifth career suspension in March with a seven-game ban for boarding Boston Bruins defenceman Brandon Carlo. He had previously received a 20-game suspension in 2018 for an illegal check to the head of St. Louis Blues forward Oskar Sundqvist in a preseason game. That suspension was later reduced to 14 games by a neutral arbitrator.

*Files from the Canadian Press were used in this report