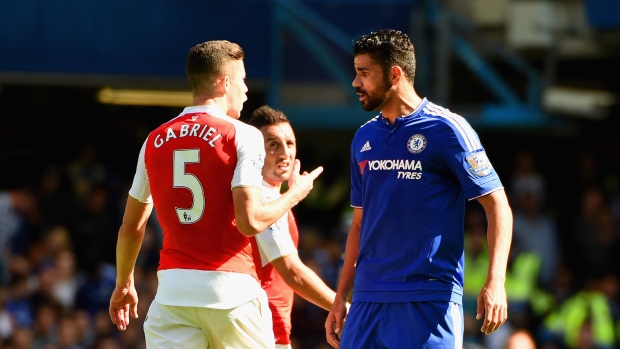 LONDON - The London derby witnessed two red cards and two scorers. And yet Chelsea's 2-0 victory over Arsenal seemed to be all about a fifth player: Diego Costa.

Just how the Chelsea striker stayed on the field after swiping at Laurent Koscielny's face and then body-slamming the defender to the field enraged Arsenal manager Arsene Wenger.

"He will do the same next week and the week after and he always gets away with it," Wenger said. "It's always provocation and he uses well the naivety of Mike Dean."

The verdict from Chelsea manager Jose Mourinho on Costa was more succinct: "Always in control."

While Costa's cynical tactics only resulted in a yellow card, the only players sent off were in the red of Arsenal.

As the rancour spread at Stamford Bridge, Costa goaded Arsenal defender Gabriel Paulista, who retaliated by flicking a kick at the striker just before half time.

That was before a goal had been scored. Chelsea's opener came eight minutes after the break through Kurt Zouma's header.

Any hope of an Arsenal comeback appear to be evaporate in the 79th minute when Santi Cazorla was dismissed for a late sliding tackle on Cesc Fabregas.

Eden Hazard completed only the second victory of Chelsea's six-game old title defence in stoppage time with a deflected shot.

Mourinho maintained his unbeaten record against Wenger in a 14th competitive game and Chelsea finally started climbing up the fledgling Premier League.

Chelsea was still eight points from the summit before leader Manchester City hosted West Ham in the last game. And Leicester has the second-highest points tally after a rapid transformation from last season's relegation-battling outfit.

It took a second-half fightback at Stoke for Leicester to stay unbeaten, with Riyad Mahrez's penalty and Jamie Vardy's strike recovering a 2-2 draw.

"It's unbelievable for the fourth time in a row we come back (after conceding)," manager Claudio Ranieri said.

It left Stoke winless like Newcastle and Sunderland, with the north-east strugglers both losing to newcomers to stay on two points.

Callum Wilson and Matt Ritchie scored in the opening nine minutes to give Bournemouth a 2-0 win over Sunderland. Watford won 2-1 at Newcastle with Odion Ighalo taking advantage of poor defending to score twice in the opening 28 minutes.

"No one said this job was going to be easy and we didn't think it would be," Newcastle manager Steve McClaren said. "It's a tough job ... it's very difficult to turn things round in two and a half months."

At Villa Park, Saido Berahino scored his first goal for West Bromwich Albion since threatening to go on strike after a failed move to Tottenham as his team beat city rival Aston Villa 1-0.

There was only one goalless game on Saturday, with Everton striker Romelu Lukaku wasting a number of chances at Swansea.