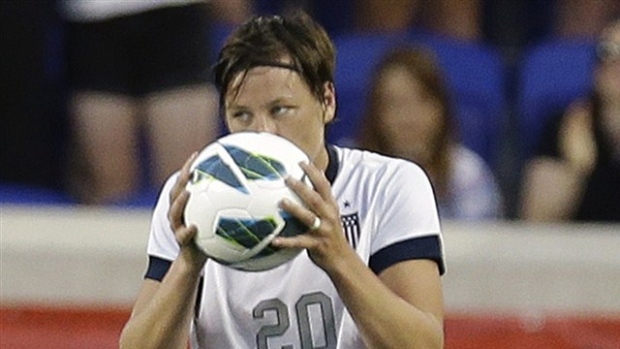 A group of women's soccer players have filed a gender discrimination lawsuit in Toronto against FIFA and the Canadian Soccer Association over their plans to play the 2015 Women's World Cup on artificial turf.

The complaint was filed Wednesday morning with the Human Rights Tribunal of Ontario, TSN has confirmed, days after FIFA officials started to inspect the six venues that will host the June 6-July 5 competition. The tournament will be held in Ottawa, Vancouver, Edmonton, Winnipeg, Moncton and Montreal.

The complainants include Abby Wambach of the U.S. and Germany's Nadine Angerer, FIFA players of the year for 2012 and 2013, respectively.

The players who filed the complaint charge FIFA is discriminating against women by having the tournament on artificial turf since the 2014 FIFA World Cup for men in Brazil was played on grass.

"The leaders of CSA and FIFA are embarrassing the game and, even more, themselves," Hampton Dellinger, a lawyer for the complainants, wrote in a statement. "The gifted athletes we represent are determined not to have the sport they love be belittled on their watch. Getting an equal playing field at the World Cup is a fight female players should not have to wage but one from which they do not shrink."

Ted Charney, a Toronto lawyer who has argued cases before the tribunal, said he doubts the women would win their case – or that it would be decided before next June.

Soccer officials have said natural grass surfaces aren't practical because some of the stadiums used for the World Cup are also scheduled to be used next summer for preseason and regular season Canadian Football League games. It's tough to ensure a grass field is in good shape for soccer the day after a football game, the officials have said.

"But there's no downside since the loser at the tribunal does not have to cover legal costs for the other party," he said. "It's a free ride, a chance for the women to make a political statement."

David Wright, another lawyer for the players, told TSN that there are methods to overlay grass on top of turf, and that FIFA's overall costs to outfitting fields with natural grass wouldn't amount to more than a few million dollars.

Wright also said that no Canadian women are among the complainants because some worry about what the CSA might do after the fact.

"There is some concern on the part of players of going against the soccer association," Wright said. "There could be various sorts of reprisals. The CSA controls the future of these players."

Georgia Trifonidis, a spokeswoman for the tribunal, said that it can take several months once an application is received for it to be referred to a mediator. Mediation can take at least several months, and if the case is not settled there, it moves to a hearing by an adjudicator. Once a final decision is made, and the adjudicator can, indeed, demand the CSA and FIFA make changes to eliminate gender discrimination, either of the parties can still file a reconsideration request with the tribunal or take the case to Ontario Superior Court.