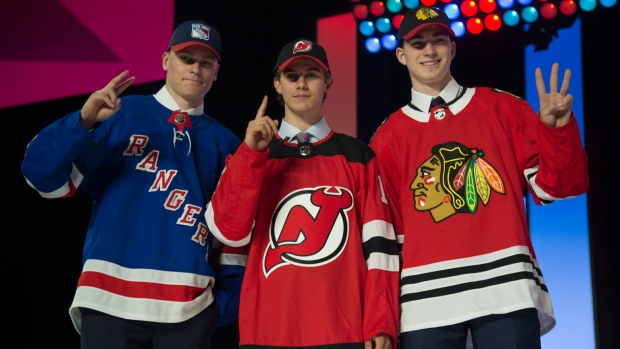 One of the most interesting statistical nuggets from the National Hockey League’s last regular season is that despite a younger-than-ever talent pool, the 2019 draft class was not a particularly effective one. Not yet, anyway.

You might think I am a difficult grader. After all, we are generally talking about 18- and 19-year old teenagers who are trying to jump to the highest professional level of competition with little preparation.

The handful of players making the jump each year are usually selected at the top of the class. This past season we saw 18-year-olds in New Jersey’s Jack Hughes, New York’s Kaapo Kakko, Chicago’s Kirby Dach and Winnipeg’s Ville Heinola make the jump. (On average, we see about seven teenagers make a same-season jump from their draft class to the NHL per year.)

While Dach looked impressive in 64 regular-season games and a cup of coffee during the NHL playoffs, the rest of the group left a little to be desired.

Development, of course, is not linear. Remember the Boston Bruins’ version of Tyler Seguin? His 2010-11 regular season was unspectacular, followed by a blistering second year – his development, especially on the defensive side of the ice, taking a bit longer to materialize.

Seguin’s career has been sterling since, and he isn’t alone. Buffalo’s Sam Reinhart had a short, underwhelming 18-year-old season followed by a second-year breakout. More recently, Carolina’s Andrei Svechnikov’s second-year explosion has already pushed him into star territory.

Being a teenager at the NHL level, especially one who gets three months from his draft day to his first game, is the most difficult of tasks. Coaches and scouts calibrate expectations accordingly. But there is a similar trap to avoid or ignore what we have learned from a player’s first professional season. We may be far off from rendering a player as a hit or a miss, a boom or a bust. But the data isn’t meaningless, either.

I mentioned a few examples of players who took big jumps in their second year after a so-so first year. There are, unfortunately, a laundry list of names who under-delivered in both seasons. Buffalo’s Rasmus Ristolainen is probably the best example of that, but he isn’t alone.

The key takeaway here is that merely throwing away a player’s draft year season on the merit of simply being exceptionally young may not be appropriate. Players develop at different speeds and we have plenty of examples of prospects developing into stars in their second, third, or even fourth professional seasons. Each player’s strengths are unique and their limitations – be it size, skating speed, skill – are all critical variables to understand and can impact how quickly a player develops at the NHL level.

Superstars tend to manifest themselves immediately, though – some of the best draft-year seasons we have seen from players have come from names like Connor McDavid, Auston Matthews, Nathan MacKinnon and Aaron Ekblad, all of whom made seamless transitions. And even players a step or two below in talent level who had strong rookie seasons tended to have strong sophomore seasons, unlike their struggling first-year counterparts.

In other words, there is plenty of time for players like Hughes and Kakko to develop into the NHLers the hockey community expected them to become. But chalking up challenging rookie seasons like the ones they had merely to age is a gamble – if only because we know that strong first seasons do mean something for the trajectory of a player going forward.