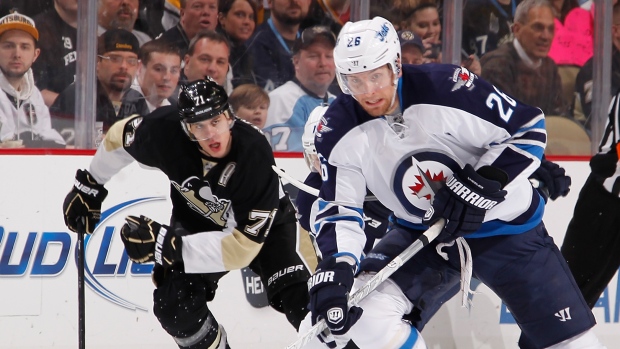 Trouba was suspended two games for an illegal check to the head of Senators winger Mark Stone in Sunday’s game. Just two games prior to that in Pittburgh last Thursday night, Malkin got Wheeler with what looked like a hit to the head but escaped suspension.

``You like to see consistency throughout,’’ Wheeler said Tuesday after the morning skate at Air Canada Centre ahead of a game with the Maple Leafs. ``We respect the fact they have a lot of hits they have to sort through every single day. There’s two glaring examples back to back, it gets the question why one way and why not the other way? So, it’s a little bit frustrating to see it. Even Jacob would say his hit wasn’t ideal, wishes he could have it back. You can’t really even speculate why they didn’t do the same to Malkin … it sure didn’t feel good. I would know first-hand. So that’s the whole job, player safety, when you start getting hit without the puck when you’re not even looking at the guy and he hits you in the head, that doesn’t seem like a part of the game to me. But, anyway, you just got to move on.’’

Told perhaps that Malkin wasn’t suspended because his hit on the Jets player hit some body before it hit the head, Wheeler had this response:

``My answer to that is why is he hitting me at all?,’’ said Wheeler. ``It has no impact on the play whatsoever. You know Evgeni Malkin is pretty aware of his surroundings on the ice, he’s one of the top players in the league. I think he knows who has the puck and who doesn’t have the puck. If I’m him, and I’m hitting a guy like that, it’s a cheap shot. Because I know I’m doing that. That’s to me how I see it.’’