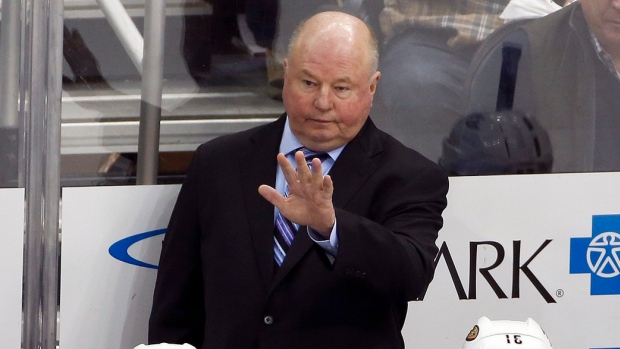 The Minnesota Wild have agreed to terms with Bruce Boudreau as their next head coach.

The deal is expected to be four years at almost $3 million per season.

Boudreau was fired by the Anaheim Ducks after their seven game, first round playoff exit at the hands of the Nashville Predators.

Boudreau led the Ducks to four straight division titles, posting a 208-104-40 record during his time with the team.

Despite phenomenal regular season records in both Washington (201-88-40) and Anaheim, Boudreau has never been able to get over the hump in the Stanley Cup playoffs. Previously, Boudreau has guided his teams to both AHL and ECHL championships. Last season’s conference final appearance was the furthest he’s ever advanced in his NHL coaching career. Boudreau is also 1-7 in Game 7s in the NHL.

Boudreau, 61, was the seventh-longest tenured coach in the NHL when he was fired by the Ducks.

Boudreau’s .659 points percentage the best all-time mark among coaches with at least 400 NHL games on their résumé. Scotty Bowman compiled a .657 points percentage over 30 seasons, but has his name etched on the Stanley Cup 14 times.

Mike Yeo and John Torchetti, in an interim role, were the two men in charge of the Wild during the 2015-16 season.

The Wild were eliminated by the Dallas Stars in the first round of this year’s playoffs.