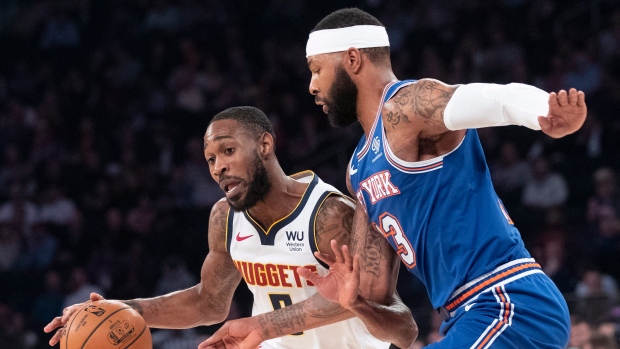 Will Barton , The Canadian Press

Will Barton scored 17 points to help the Nuggets beat the Knicks 129-92 on Thursday night.

Jerami Grant added 16 and Monte Morris had 15. The Nuggets shot 56% from the field, had eight players reach double-figures and snapped a two-game losing streak.

"We know our second unit is huge for us," Nuggets reserve Juancho Hernangomez said. "We know what we can do. Our energy has to be at a high level every time. We don’t know if we’re going to make shots or not, we just have to defend, have fun and play with energy. That’s our identity and that’s what we’re trying to do every single night."

"I thought the key to tonight was that we went to our bench," Nuggets coach Mike Malone added. "I thought that group as great. Everyone contributed. Everyone stepped up. So, it’s a good way to start off the road trip."

Mitchell Robinson had 17 points and Marcus Morris and Bobby Portis each added 10 for New York. The Knicks have lost eighth straight.

Denver led by 43 points in the fourth quarter.

Knicks coach David Fizdale called the team's effort "sickening" after losing by 44 to Milwaukee on Monday and Thursday's lopsided loss to Denver.

Fizdale was asked if he's worried New York's struggles will be blamed on him.

"I don't care about all of that, I don't even think about that really," Fizdale replied.

Nuggets: Coach Malone said the team has its highest expectations in his tenure and every game the team plays opponents are “circling us.” ... Malone added his greatest challenge will be getting Michael Porter Jr. minutes to develop going forward.

Knicks: Elfrid Payton returned to the lineup after missing the previous 17 games. ... Damyean Dotson suffered a dislocated left pinky in the second quarter.

Nuggets: At Boston on Friday night.