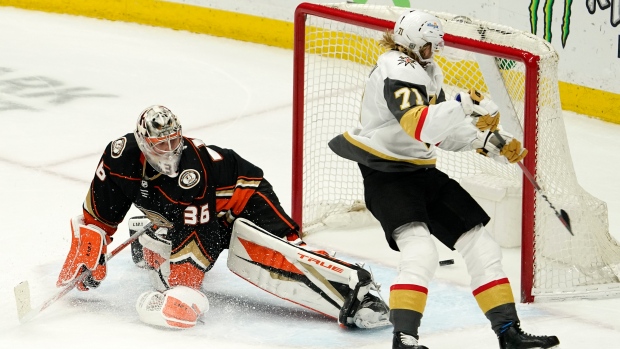 The Vegas centre scored twice, including the winner in overtime, as the Golden Knights continued their mastery of the Ducks with a 3-2 victory Saturday night.

“Me and Theo (defenceman Shea Theodore) always say before the games, ‘These guys didn’t want us,’ so there’s always some added motivation for these games,” said Karlsson, who has three of his five goals this season against the Ducks.

Karlsson scored on a breakaway and put a wrist shot past John Gibson with 1:37 remaining in overtime. Karlsson also had a highlight-reel goal in the second period to give Vegas a 2-1 lead and break an eight-game goal drought.

Karlsson, who was drafted in the second round by Anaheim in 2011 before being traded to Columbus four years later, has 12 goals in 22 games against the Ducks. Coincidentally, Theodore had a pair of assists in the win.

“He’s been a little snakebit lately, so it was nice for him to get a couple,” Vegas coach Pete DeBoer said of Karlsson. “He was under pressure on both goals, so there was not a lot of time to think and just react.”

Alex Pietrangelo extended his points streak to three games with a goal and an assist while Marc-Andre Fleury made 28 saves, including a pair on point-blank shots from Isac Lundestrom in overtime.

Vegas has won four of five meetings against Anaheim this season, and 14 of 17 all-time.

Rickard Rakell led Anaheim with a goal and an assist, while Adam Henrique also scored. Gibson stopped 24 shots for the Ducks, who are winless in their last six games.

“Overall, we played hard against some steep competition. We could have been assertive more early but got our feet underneath us," Anaheim coach Dallas Eakins said. “We played a hard game and a gritty one to come back and tie it up.”

Rakell and Pietrangelo both scored their second goals of the season during the first period on wrist shots from the faceoff circle.

Rakell’s shot came from the left circle and beat Fleury on his short side midway through the period. Pietrangelo evened it with 3:31 remaining in the first when he went top corner from the right circle while Gibson was screened.

Karlsson put Vegas on top nine minutes into the second period when he got behind Anaheim’s defence after getting a long pass from Pietrangelo and then chipped a shot over Gibson’s glove as he was falling to the ice.

Henrique made it 2-2 11 minutes into the third when he was able to knock in a rebound after Fleury made a pad save on his initial shot. It was Henrique’s first game back in the lineup after he cleared waivers on Feb. 21.

“I can either look at the past and be really frustrated about it or just try and to take it game by game and try to do something about it,” said Henrique, who has two goals this season.

The win was Fleury's 100th in the regular-season with Vegas. The 36-year old Fleury was the Golden Knights' first pick in the expansion draft after he won three Stanley Cups in 13 seasons with Pittsburgh.

Fleury leads the league with 20 regular-season shutouts over the past four seasons. He is fifth in wins and his 2.45 goals-against average is sixth among goalies who have played 80 or more games.

“It’s been amazing playing in Vegas from day one,” Fleury said. “The support we have been getting has been great. The way the guys have worked to establish the franchise has been good.”

Fowler, who was the 12th overall pick by Anaheim in the 2010 draft, is the youngest player in franchise history to play 700 games with the club at 29 years, 2 months and 22 days. He had the assist on Rakell’s goal and has a point in three straight games (one goal, four assists).

Shattenkirk was taken by Colorado with the 14th overall pick in 2007. He signed with the Ducks during the off-season after being with Tampa Bay during their run to the Stanley Cup last season. The 32-year old Shattenkirk has also seen stints with St. Louis, Washington and the New York Rangers.

Ducks: continue their homestand Monday against the St. Louis Blues.