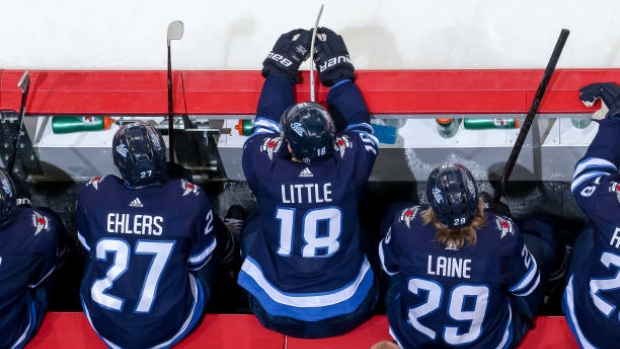 While Patrik Laine has not reached an agreement on a new contract with the Winnipeg Jets yet, he has reached out to clear things up with a teammate.

Jets centre Bryan Little told reporters on Thursday that Laine contacted him this week after the restricted free agent spoke to Finland's Iltalehti about not being put on the first line with Winnipeg's top players like Mark Scheifele and Blake Wheeler.

"I actually talked to him two or three days ago," said Little, who had Laine on his wing for most of last season. "He texted me and asked me to call him so I called him up and chatted for a few minutes. He was saying sorry and apologizing for just the way I think it was interpreted, which I kind of understood before I even talked to him.

"I know Patty well enough to know he's not someone who's going to purposely say negative things - especially about his teammates."

Laine is currently in Switzerland skating with SC Bern and Little said he knew that there was some misunderstanding about what Laine said.

"I said, 'you don't have to apologize to me, I get it,'" Little continued. "Sometimes things are misunderstood. I knew right away he wants to play with the best players. That's kind of the way he was saying it. And yeah, 'Scheifs' and 'Wheels' are our best players and I'd like to play with those guys too.

"I think everyone does. When you're young and you want to score more goals and get more points and play with the best and get more ice time and stuff like that. I think he was just voicing that - he just wants to be one of our go-to guys."