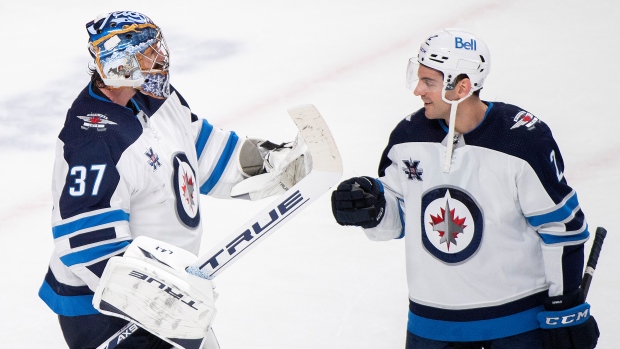 The Winnipeg Jets goalie has experienced the thrill of playoff hockey three seasons in a row. He’s been named the league’s best netminder. But Hellebuyck has yet to hoist the Stanley Cup.

Hellebuyck and the Jets will begin their latest quest for the Cup on Wednesday when they face the Edmonton Oilers to kick off the first round of the playoffs.

Winning with this particular collection of players would be extra special, the goalie said.

“Being with this group of guys, we’ve been growing together for the last couple years and there’s no better team that I’d want to celebrate this with,” he said.

"I know it’s going to be a lot of hard work, but I’m really excited for that. Because once you get to the end of it, you look back and you can really cherish all those hard games and those tiny moments that don’t seem like much at the time, but they are big moments. So I’m looking forward to those tiny big moments."

Last season, the Calgary Flames ousted the Jets from the play-in round in a four-game series. It was a disappointing finish after a regular season that saw Hellebuyck post a 31-21-5 record with a .922 save percentage and a 2.57 goals-against average.

He won the Vezina Trophy, awarded annually to the NHL’s top goaltender, for the performance.

The 27-year-old from Commerce, Mich., has remained a stalwart force in the Jets net this year with a .916 save percentage and a 2.58 goals-against average through regular-season play.

Hellebuyck spent more time on ice than any other NHL goaltender (2,602 minutes and 49 seconds over 45 games) and ranked fifth in both wins (24) and shutouts (four).

The six-foot-four, 207-pound netminder been a key leader for the Jets all season, said coach Paul Maurice.

“The guy that plays the most minutes is the most important guy. (Hellebuyck's) our 60-minute guy," Maurice said. "And he’s excited and he’s obviously incredibly talented and gifted, so we feed off that a great deal.”

“That’s kind of been our M.O. here for the last handful of years — regardless of how bad we could throw a stinker out there, we’ve got a chance with 37 in the net,” he said. “So that’s where our confidence starts. He’s a very confident guy in his game and he gives us a ton of confidence back there.”

That confidence “kind of trickles down through the entire team,” said Jets defenceman Dylan DeMelo.

“He stays very even keel no matter what. When he’s playing great he stays the same way as when, you know, maybe he lets in a few soft ones and gets pulled.”

Playing in front of Hellebuyck is a lot of fun, DeMelo added.

“You know he’s there to have your back,” he said. “Obviously I knew how good he was, but playing in front of him I just realize how good he really is. Top, top goalie in this league and in the world and we’re very lucky to have him.”

The Oilers dominated the season series between the two sides, winning seven of nine games, including a 6-1 decision on April 26.

Hellebuyck knows some onlookers have low expectations of the Jets heading into the playoffs. And he’s using their skepticism as fuel.

“I try not to look at all that stuff, but if you want to call us an underdog, go ahead,” he said. “We’ll use that as energy. Any little advantage that we can get right now we’re going to take. That’s what it takes in playoffs. Anything — the last puck, the last tip, the last block — is going to matter.”