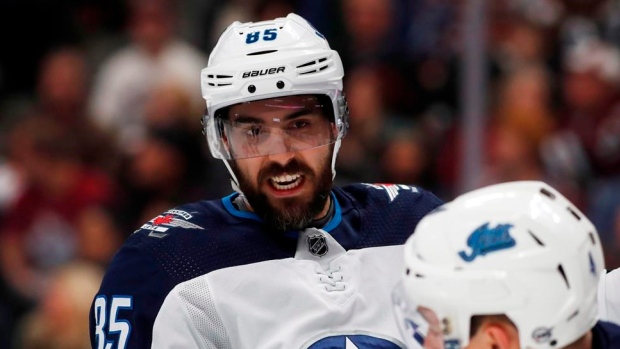 Winnipeg Jets forward Mathieu Perreault is livid after the NHL's Department of Player Safety decided not to hand out any discipline to Vancouver Canucks forward Jake Virtanen following a controversial play Tuesday.

Virtanen's elbow got up in the head of Perreault away from the puck during the first period of their game in Winnipeg. No penalty was called on the play.

"Player safety, my ass," Perreault said Thursday. "This is literally an elbow to the face to a guy that didn't have the puck. I see him coming, I brace for a hit, it was a late hit. I never had the puck and he flicks his elbow to my face and they're not going to do anything about it.

"Now I've got to take matters into my own hands next time this happens and I get to swing my stick across his forehead and I shouldn't get suspended then."

The five-foot-10 Perreault, who suffered a concussion earlier this season after taking a hit from Philadelphia's Joel Farabee that resulted in a three-game suspension, said his smaller stature could force him to use other methods to retaliate.

"I can't really protect myself if the league's not going to protect me," Perreault said. "I'm the smallest guy on the ice so I can't really fight anybody. The only thing I can do to defend myself is use my stick. So the next guy that does that to me is going to get my (expletive) stick and I better not get suspended for it."

Perreault suggested the six-foot-one Virtanen wasn't concerned about the elbow because of his size advantage.

"He's just taking on a smaller guy. If I was a bigger guy, he probably doesn't do that because you know I can beat him up," Perreault said.

"Because the head shots, I thought that one was clean, easy to see. I take these guys off the hook a little bit because some of these are hard to figure out the timing of it. Players turn at the end. You here them say the game happens fast, it happens so fast out there.

"I thought that one was an (easy) decision."

Virtanen said he had heard about Perreault's comments and said they probably came out of frustration.

"He's a good player," Virtanen said after scoring the winning goal in Vancouver 3-1 win over Arizona on Thursday night.

"I have nothing bad to say about him. I wasn't trying to go out and murder a guy. It could have been a lot worse if I really hit him. He's a good player and I honestly didn't even mean to do that. He can be frustrated. I think anyone would kind of be frustrated at that point.”

Virtanen said he has not heard anything from the league over the incident.

"It's hockey," he said. "Stuff is going to happen. It's not going to be flowers and roses all the time where everything is clean. It's hockey. Things move fast out there. I didn't mean to do it. It is what it is."

The Canucks and Jets play one more game against each other this season, March 15 in Vancouver.

The Perreault-Virtanen incident marked the second time in the past week tempers have flared following a clash between Canadian teams.

Zack Kassian of the Edmonton Oilers was suspended for two games for delivering a series of punches to Matthew Tkachuk as the Calgary Flames forward turtled to protect his head.

Earlier, Tkachuk rocked Kassian with two big and, according to the NHL, clean hits that twice sent Kassian's helmet flying.