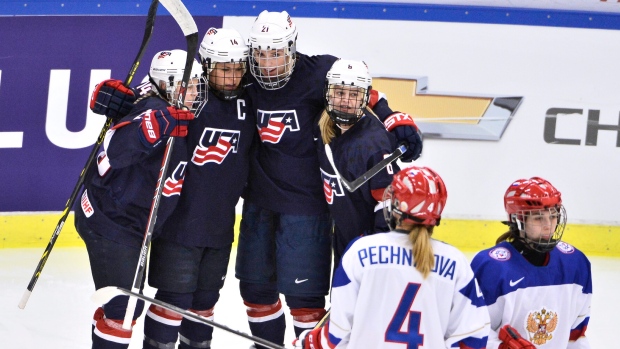 In a sport developing as quickly as women's hockey, there were bound to be some growing pains.

And so it is with the plans for a women's outdoor game that is scheduled as part of the NHL's Winter Classic festivities on Dec. 31 - Jan. 1 at Gillette Stadium in Foxborough, Mass. The Boston Bruins will play host to the Montreal Canadiens on New Year's Day in an NHL regular season game. The annual (MTL-BOS) alumni game happens on New Year's Eve.

But a scheduling conflict means the core of the NWHL's Pride won't be available to play in the outdoor game.

Eight members of the Pride - including Olympians Hilary Knight, Kacey Bellamy, Brianna Decker and Gigi Marvin, among others - will not be able to play in the outdoor game because they've been invited to participate in the Team USA camp, which is a critical part of the evaluation of players who want to compete in the World Championship.

The scheduling conflict is causing some concern on both sides of the issue.

The NWHL believes this outdoor game is a tremendous showcase for women's hockey and getting official recognition from the NHL to be part of the Winter Classic festivities is a great opportunity to the grow the women's game. But with the eight-member core of the Pride not able to play in it, the NWHL feels the event will be seriously compromised if those players aren't in the Pride lineup.

USA Hockey, meanwhile, has had its annual camp scheduled long before the notion of any women's outdoor game. USA Hockey can't change the camp dates or excuse a select group of players from being there when the camp is so vital to the choosing of the American entry in the World Championship.

Caught in the middle are the eight players, who obviously would like to be part of the Winter Classic outdoor game festivities in Boston, but don't want to jeopardize their opportunity to represent their country at the World Championship.