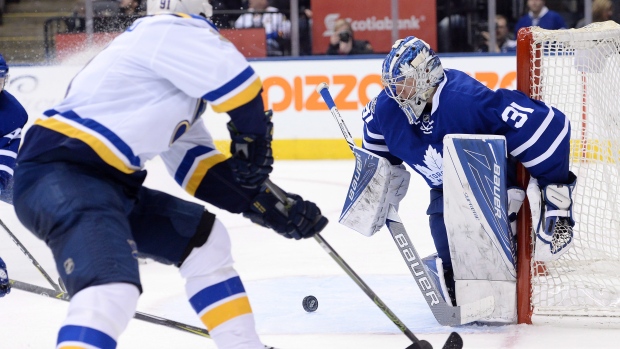 TORONTO — Frederik Andersen is headed for one of the busiest seasons in NHL history.

The 27-year-old is on pace to face 2,173 shots in his first season with the Toronto Maple Leafs in what would be the 15th highest total ever. Only 31 times in league history has a goaltender faced even 2,100 shots in a single season — Pekka Rinne and Cam Ward the last to do so five years ago.

Facing four shots per-game more this season than last with Anaheim, Andersen should blow by a career-high for shots faced in one season by the weekend. But the busy workload hasn't come without a hitch or two in the first go-around for Andersen, a part-time starter previously with the Ducks.

Andersen has posted an .894 save percentage since Jan. 1. That includes a superb 38-save effort in a 2-1 overtime defeat against St. Louis on Thursday night.

"Well it hasn't been good enough but there's times in the year you have little dips," Leafs coach Mike Babcock said before facing the Blues. "You've just got to make sure you work hard every single day and those dips are shorter and they don't happen as often.

"So that's the challenge for him."

Unlike Cam Talbot, who's been rather consistent while leading the league both in shots faced and starts for the Edmonton Oilers, Andersen has been up and down. There were significant October woes (.876 save percentage), stupendous highs in November and December (.939), and a series of lows in January and early February.

He hasn't been helped at times either by the Leafs sometimes wobbly defensive play.

Andersen says he and Leafs goalie coach Steve Briere certainly take that into account when evaluating performance. Sometimes an opponent might score five and "you feel worse than you actually played" and other times the stat-line might look great but was more the result of strong team play.

"You've got to take ownership of what you can do," said Andersen, stuck on 99 career wins for almost a week. "Say it's a big scoring chance; you've still got to look at what yourself could've done in every situation.

"That's how you learn and get better. You can't just pass up the blame every time. You've got to know when it's realistic for you to improve and do something different in the net."

Briere keeps that information in "this little book and gives me the information he needs to give me", added Andersen, the only Danish netminder in NHL history.

The big test for Andersen this season was whether he could capably handle the workload of a No. 1. Toronto made that bet in signing him for five years and US$25 million last summer following a trade from Anaheim.

So far the answer would be yes, though recent returns under heavy strain have been less favourable.

This season, Andersen has been a touch better than average, tied for 15th among regular starters with a .915 save percentage and 19th with a .918 even-strength clip. He carries the 18th-highest cap hit ($5 million) among all goaltenders this year.

The Leafs need Andersen to be effective if they hope to qualify for the playoffs. But they've also become rightfully wary about his workload — which risks not only ineffective performance but injury.

Andersen has already faced 1,406 shots in 44 starts (nearly 32 per game) and closing on the career-most 1,436 shots he handled in his second NHL campaign. He's currently pace to make 68 starts this year with a new career-high likely to be established by early March.

Ideally that number would be closer to 60, Babcock said.

The absence of a trusted backup over the first few months of the season is partly to blame for Andersen's hearty usage. That's why Toronto scooped up Curtis McElhinney off waivers from Columbus in early January.

So far the 33-year-old has delivered, winning two-of-three starts with a .955 save percentage.

Babcock said how many games Andersen plays the rest of the way will depend "on how he's playing and how fresh he is and depending on how our team is playing and also how (McElhinney's) playing."

History, in other words, may have to wait.