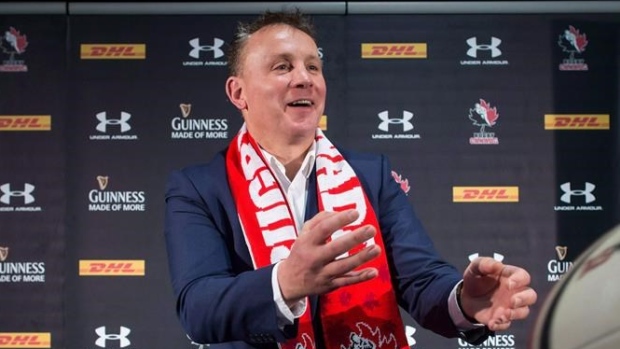 While Canada has yet to book its ticket to the 2023 Rugby World Cup in France, it will learn Monday what awaits come qualification.

The draw, set for Paris, will determine the four five-team groups for the 2023 showcase, scheduled to run Sept. 8 to Oct. 21 in nine stadiums.

With North American qualifying yet to start, Canada men's coach Kingsley Jones will be looking to see where Americas 1 and 2 end up in the draw. Both have been placed in the draw's fourth pot along with Europe 1 and 2.

"Americas 1, Americas 2, we've got to find out which one of those slots we'll be. But it will be very interesting to see," Jones said.

Chances are both will have some tough company. An Americas qualifier could land with three teams currently ranked in the top seven in the world.

The 12 teams already qualified, by virtue of finishing in the top three of their pools at the 2019 tournament, are defending champions South Africa, as well as New Zealand, England, Wales, Ireland, France, Australia, Japan, Scotland, Argentina, Fiji and Italy.

Eight more countries will join them via regional qualifiers.

The 12 already in have been seeded based on World Rugby's rankings as of Jan. 1, 2020 — in deference to the COVID-caused havoc on the international schedule — and placed in the first three four-country pots.

The final pot consists of Africa 1, Oceania 1, Asia/Pacific 1 and the repechage qualifier winner.

There has been movement up and down the rankings since January, although Canada has been grounded by the pandemic.

For example, Wales currently stands ninth but finds itself in the top pot while No. 10 Japan is in Pot 2. No. 7 Scotland and No. 8 Argentina, which recently scored a first-ever win over the third-ranked All Blacks, are in Pot 3.

Due to the pandemic, the 23rd-ranked Canadian men have not played since their final outing at the 2019 World Cup in Japan — a 66-7 loss to South Africa. Canada's final match in the tournament was called off due to Typhoon Hagibis.

The Canadian men (0-3-0) finished fourth in their group behind New Zealand, South Africa, Italy and Namibia.

Canada's qualifying will finish by October or November 2022.

In the past, Americas qualifying has pitted Canada against the U.S. with the winner securing a World Cup berth and the loser facing a South American team for the second direct berth. The loser of that match has previously had a third shot via a last-chance repechage tournament.

Before the 2019 event, Canada had always secured its Americas berth at the first stage of qualifying.

But last time out, the Canadians lost the qualifying series to the U.S. and Uruguay before winning the last-chance repechage tournament that also featured Germany, Hong Kong and Kenya.

The loss to the Americans cost Mark Anscombe his job as Canada coach in August 2017, with Jones taking over.

Qualifying for 2023 has seen various permutations in the region. Canadian officials had been led to believe it would involve results in the Americas Rugby Championship — which involves Canada, the U.S, Brazil, Chile, Uruguay and an Argentina reserve side — over the next two years.

The latest qualifying map in the region has the Rugby Americas North 2021 champion facing the Sudamerica Rugby 2021 titleholder in the two-legged Americas 1 Playoff. The winner becomes Americas 1 while the loser heads to the Americas 2 Playoff.

Whatever the format, the Canadians will face competition from the 16th-ranked Americans and No. 18 Uruguay, with No. 26 Brazil and No. 29 Chile looking to get into the mix.

The Canadian men have made every World Cup field since the tournament debuted in 1987. But the team has only got out of the preliminary round once, in 1991 when it lost 29-13 to New Zealand in the quarterfinals.

The Canadians are coming off a high-performance camp last month, carried out under pandemic protocols in Langford B.C.

"It was a huge success," said Jones, who brought in some 36 players. "We had no dramas … There was a lot of planning in everything we did, from meal arrangements to training environment."

"The planning paid off and it went seamlessly," he added.

Two scrimmages went without injury. The roster was largely domestic-based due to pandemic-related travel restrictions, with Jones estimating another dozen elite Canadian players are spread around the globe.

"It was such an invaluable thing for us to be able to have time with the players for the first time in a year," said Jones.

The camp also marked the first opportunity for new senior assistant coach Rob Howley, a former Wales coach and scrum half, to work with the Canadian players in person.

"It was fabulous," said Jones. "I think the players really enjoyed it. A new voice, obviously a very experienced voice … He's gone home (to Wales) really excited by what he saw."

Jones likely won't get his player back together until the test window in July, which could include a rare match with England. Major League Rugby, which was home to some 50 Canadians last season before games were cancelled due to the pandemic, is slated to kick off its 2021 campaign on March 20.

This report by The Canadian Press was first published Dec. 13, 2020