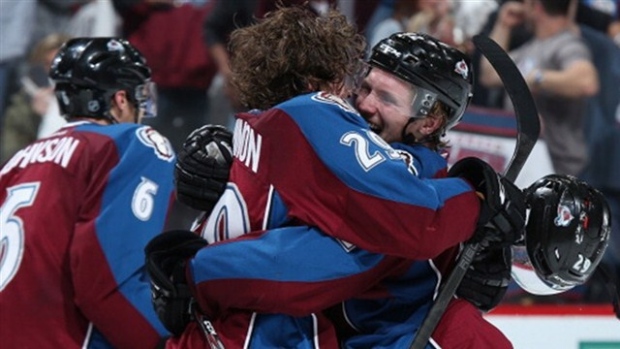 There's been exhaustive talk about the inevitable regression facing the Colorado Avalanche - a team that more or less rode the percentages to an improbable playoff berth last season.

We no longer approach teams like last year's Avalanche club with questions about whether their strategy at even strength - which at least last year, was get out-shot and win regularly - is sustainable for the long-term.

The real question is whether teams in these precarious situations can do enough with their current roster to improve on last year's performances and hope to mitigate the expected drop-off in point production.

Colorado's a particularly interesting case for this. The Avalanche may have been treated as a paper tiger all through last year despite their winning ways, but there are legitimate questions about whether player development can stave off some of the expected regression.

Optimists point to the collection of young, near-prime talent on the roster which includes Gabriel Landeskog, Matt Duchene and Ryan O'Reilly. They are three of the league's better forwards and the team has certainly found their starting goaltender in Semyon Varlamov.

Perhaps the most intriguing name on the roster is wunderkind Nathan MacKinnon, who is coming off a brilliant rookie year. The 2013 No. 1 overall pick is an unbelievable combination of speed and versatility and scored at a comparable rate to that of Chicago's Marian Hossa and Philadelphia's Claude Giroux last season. Colorado will only rely on him more and his average ice time - which was 17:21 last year - should go up this season.

And MacKinnon's underlying numbers from his Calder Trophy-winning campaign are fascinating.

A good chunk of statistical oddity is tied up in his home and road splits, which were night and day. Like most other players (and teams) around the league, MacKinnon saw a drop-off in his performance on the road. But MacKinnon's slide was particularly steep - enough that it should warrant investigation by a team looking to immediately improve their 5-on-5 play next season.

To quickly capture MacKinnon's drop-off, consider this - no skater that logged more than 500 minutes over the last two seasons saw road depreciation quite like his: 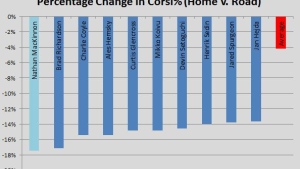 MacKinnon's Corsi percentage was 18 per cent worse on the road. That was well above the league average, which was about four per cent worse for the same collection of regular skaters. So yes, that drop is a bit out of the norm. 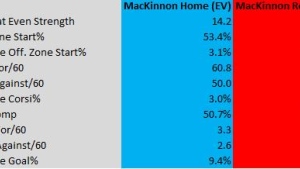 Now let's look at a table of some of the other pertinent underlying data for MacKinnon from last season:

The raw Corsi For and Corsi Against totals show what kind of trouble MacKinnon ran into on the road. The reality is that MacKinnon and his linemates spent way too much time defending the play. At home, Colorado was +10.8 shot attempts per 60 minutes with MacKinnon on the ice. On the road, that number spiraled to -10.4. The main reason for this insane shot-differential swing is tied up in MacKinnon's road Corsi Against per 60 – a number so high, only three forwards (Toronto's James van Riemsdyk and Tyler Bozak, and Buffalo's Tyler Ennis) finished worse.

It's for those reasons that I found MacKinnon's zone start numbers in the initial table interesting. While MacKinnon enjoyed some favorable zone start situations on home ice, he was in more of a defensive role on the road. His raw offensive zone start percentages dropped 5.52 per cent and the percentage of offensive-zone draws he took relative to his teammates actually swung into the negatives. The drop in offensive zone starts meant less offensive opportunity immediately following the restart of play for MacKinnon.

I was curious about whether MacKinnon was getting burned by a particular aspect of the zone starts beyond just opening more in the defensive zone last year. So I decided to pull out his Corsi Percentage data in the 30-second window following every draw he was on the ice for last year, then splitting by the outcome of that draw (i.e. win/loss) and venue (i.e. home/road). Was it possible that MacKinnon's underlying numbers were getting dinged by something immediately off of the draw? 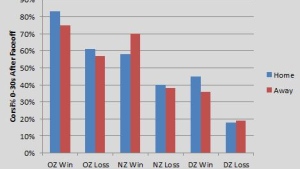 There's not much difference there. I think it's safe to say that MacKinnon's raw drop in zone starts – combined with a slight uptick in competition, team effects, and the assortment of subtleties that make road hockey difficult for all (e.g. long change, general risk aversion) – were the contributors behind his slide, as opposed to a singular aspect of the game where MacKinnon really deteriorated.

The mere fact MacKinnon was able to have such an explosive season as an 18-year-old is enormously impressive; most players his age are shielded altogether from NHL competition and the few who do get minutes generally sink before they swim. MacKinnon may have looked like a boy amongst men at times on the road last season, but the opposite was true at the Pepsi Center. That part shouldn't be ignored. But for now, the MacKinnon question is an avenue worthy of further investigation.