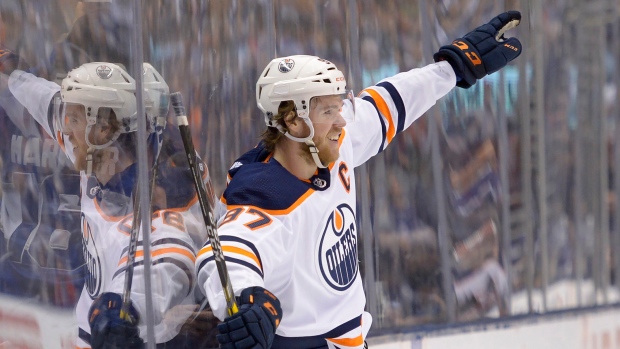 Here is a fun exercise fitting for both the Christmas break and the return of the National Hockey League: What is the best lineup you can make solely constituting representatives from the all-Canadian division that has been assembled through temporary realignment for the 2020-21 season?

Let’s first establish some ground rules. With seven Canadian teams and only six available roster slots, we will have to take one head coach from the list of seven clubs. As a second rule, no team can send more than one representative, which means all seven organizations can only contribute once to our all-Canadian division roster.

It sounds easy at first, but crafting this roster is quite difficult in practice. What do you do for teams like the Edmonton Oilers and Toronto Maple Leafs, where multiple MVP candidates are available? The Oilers may not need to choose between Connor McDavid and Leon Draisaitl in the real world, but a difficult decision will need to be made in our exercise.

With how difficult the forward selections will be, it makes sense to roster build from the net out – especially since the easiest of decisions will be between the pipes.

Here’s my crack at our all-Canadian roster.

This is probably the lone slam-dunk case. The all-Canadian division is ripe with talented young coaches, but only one has a Stanley Cup ring, and that coach is Claude Julien.

But the argument about Julien doesn’t need to go back to the 2010-11 season. Just last year, Julien’s Canadiens – despite an undermanned roster with heaps of developing pieces scattered across the roster – finished first in puck possession, with 55 per cent of the shot share in Montreal’s favour.

The decisiveness in which they won the shot differential battle on most nights paid dividends, as the Canadiens finished +5 in goals at five-on-five despite poor shooting percentages and middling save percentages from Carey Price and company in net. That goal differential, by the way, was the best of the seven Canadian teams in five-on-five play.

It is quite difficult to look past last year’s Vezina Trophy candidate, particularly since Hellebuyck has a long track record of producing at the NHL level.

No goalie faced a tougher shot profile than Hellebuyck last season – the Jets’ young and battered blueline spent most of last season making life as difficult as possible for the fifth-year veteran. But Hellebuyck was up to the challenge, finishing second in save percentage amongst qualified goaltenders (Boston’s Tuukka Rask finished first) and first in goals saved above expectations (Arizona’s Darcy Kuemper finished second) by a mile. (Chart via HockeyViz): 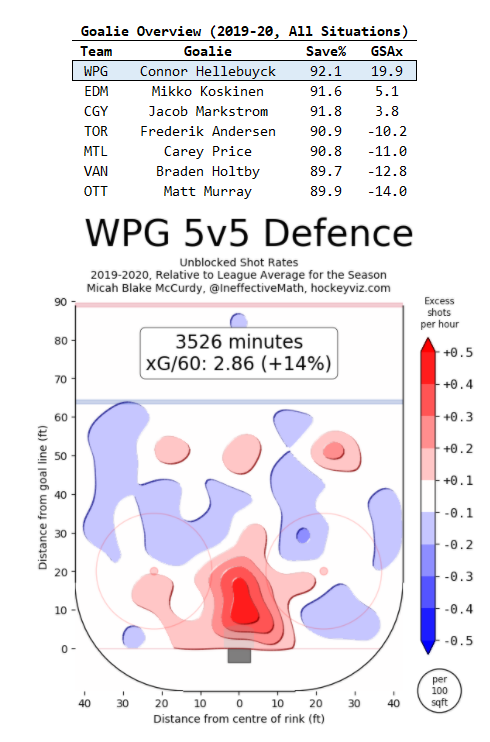 I gave brief consideration to the likes of Calgary’s Jacob Markstrom after his outstanding season in Vancouver, but the Flames have other candidates worthy of consideration at the wing and the amount of daylight between Hellebuyck and the field was compelling. Easy choice here!

This was a difficult decision in that Ottawa really only has two players worthy of any sort of consideration – one being Chabot, the other being Brady Tkachuk.

I don’t think there is any doubt that Tkachuk is Ottawa’s best player heading into next season, but he also plays a position with staunch competition amongst the Canadian teams, and Chabot would be talented enough to play on most top pairings within the division.

Chabot’s inclusion comes at the expense of other worthy candidates – Calgary’s Mark Giordano, Toronto’s Morgan Rielly, and Vancouver’s Quinn Hughes are just three of a handful of names who were considered for this spot. But the one thing you can say about Chabot is he’s getting results in just about the toughest situation imaginable, with an extremely limited and talent-deficient supporting cast around him.

Chabot is still refining his defensive game, but as a puck carrier and distributor he is outstanding. And the Senators tend to be very dangerous on the attack with him on the blueline. Over the past two seasons, Chabot’s averaging 1.6 points per 60 minutes (20th amongst defencemen), and Ottawa’s averaging 3.4 goals per 60 minutes (22nd amongst defencemen) despite difficult circumstances.

The past off-season was very quiet, in large part because of the economic uncertainty challenging the league. That forced a series of playoff contenders to build out their rosters without the salary cap relief normally created by way of league growth.

One of the exceptions to that rule? The Toronto Maple Leafs landing star right-side defenceman T.J. Brodie, who immediately improves an otherwise ailing blue line heading into the 2020-21 season.

Brodie, who spent years playing inside of Calgary’s formidable top four, is a solid two-way defenceman who routinely drives favourable goal differentials for his teams. Over the past two seasons in Calgary, the Flames were +30 goals better than their opponent with Brodie on the ice, but just +10 goals better with Brodie’s pairing off the ice. Add that to the fact that Brodie saw occasional time both shorthanded and on the power play the past couple of seasons, and you have a versatile player who can deploy in any situation.

Brodie also didn’t have much competition for this position – Montreal’s Shea Weber would be the obvious other choice, but the Canadiens were taken off the board when we selected Julien. And as someone who thinks coaching matters quite a bit in the NHL, that’s not something I anticipate walking back.

Though Elias Pettersson and Quinn Hughes understandably garnered most of the fanfare last season, Miller had a very successful opening season in Vancouver, and his two-way play will be a useful asset alongside our hyperaggressive centre.

This position is absolutely loaded although selecting McDavid – perhaps the most dynamic offensive player the National Hockey League has ever seen – didn’t take much time.

It’s not lost on me how many other players were worthy of consideration. Toronto’s Auston Matthews and Vancouver’s Pettersson alone have compelling arguments as top-10 skaters in the game right now, and Winnipeg’s Mark Scheifele isn’t far behind. (In another universe, my left wing/centre combination is Edmonton’s Leon Draisaitl and Toronto’s Auston Matthews.)

Underpinning those freakish scoring rates is the reality that McDavid didn’t always have weapons like Draisaitl and Ryan Nugent-Hopkins on his hip, which meant McDavid has had to carry a much higher proportion of the scoring burden than his peers. His 3.0 points per 60 minutes in even-strength play over the last five seasons is so far ahead of second place (Nikita Kucherov, 2.7) that you forget for a minute he is just 23 years of age.

It’s impossible to criticize a player of McDavid’s calibre, but if you were to do so you would point out that the Oilers have been leaky on the defensive side with their top unit on the ice. Rather than harnessing a player with such game-breaking ability, we would much rather find a supporting cast that can complement his speed game while playing defensively responsible hockey in the process.

So along with Miller, let’s welcome Matthew Tkachuk to the fold.

Using Brodie on the right side of our defensive pairing nullifies the possibility of including the likes of Mitch Marner and William Nylander from Toronto’s roster. The same is true for Patrik Laine, since there was no chance of taking a goaltender other than Hellebuyck from Winnipeg.

But Tkachuk isn’t a safe choice – he is the ultimate pest and an incredibly gifted player when it comes to battling in the net-front, an area that would very much benefit playmakers in the form of Miller and McDavid.

By regression-based measures like Goals Above Replacement, Tkachuk was the team’s most value-added skater last season, adding +12.4 goals above expectations for replacement level talent. Though Tkachuk’s offensive production underpins most of that (his 61-points led the team in all situations play, his 23 goals second to only teammate Elias Lindholm), it cannot be lost how valuable his penalty differentials are for a team. In four seasons, Tkachuk has created 48 additional power play opportunities, which are valuable goal-scoring opportunities each time over for the Flames.

The one thing that I come back to is how effective Tkachuk is at penetrating the heart of the defence despite playing with a forward group that can be notorious for generating activity from the perimeter. If we look just at least season’s splits for the Flames, it becomes very obvious when Tkachuk is playing and when he is not: 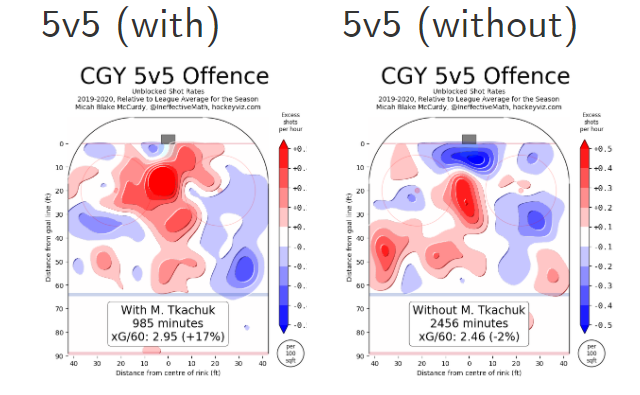 So, there you have it – my All-Canadian roster.

This is far from the most offensively dynamic lineup possible; the temptation of sacrificing at a couple of other positions in order to pair up the likes of Draisaitl and Matthews up front (instead of Miller and McDavid) was easily the hardest roster call, but I love the composition of this team at all ends of the ice. It’s balanced defensively, ripe with scorers, and anchored by the best playmaker in the league.