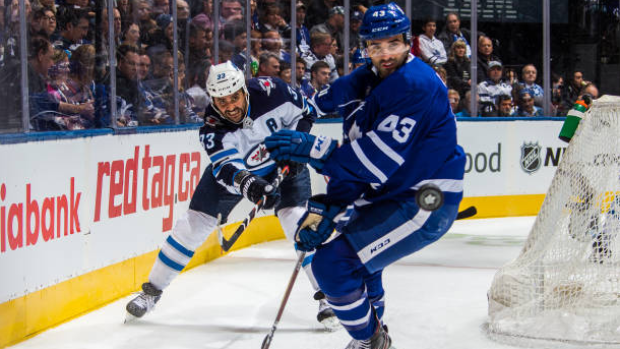 With this being the final NHL regular season of the decade, I had been planning on drafting up All-Decade Teams for the 31 clubs. It’s the perfect off-season topic – one you can give proper attention to in the middle of July when there is little else going on in the hockey world.

Then the last month happened, and plans certainly changed.

So, how would one go about defining what these All-Decade Teams should look like? There are any number of ways to go about this, but I think the selection criteria is important to define.

“Sustained productivity” is the phrase that best defines the players we are looking for – those who were highly productive contributors with the same team for an extended period of time.

Because we are looking at aggregated contributions, it of course means that special one- off seasons may get lost in the shuffle – think of Mike Ribeiro in Washington as an example, a player who averaged more than a point per game in his only season with the Capitals.

There are a few ways to quantify contributions – we could use something like scoring rates, but that would really only help us with our forward group. We could use on-ice goal differential, but that would disproportionately affect players who skated in front of elite or shoddy goaltending. As one example: Connor McDavid’s sophomore season was played in the midst of a blistering Cam Talbot performance. Oilers forwards predating McDavid, like Taylor Hall in 2010-11, played in front of 37-year old Nikolai Khabibulin. You get the point.

To try and cover all bases and contributions across all game states, I’ll use Evolving Hockey’s regression-based Goals Above Replacement model. Here we can aggregate contributions for all skaters relative to our expectations for replacement-level talent, and the results are about what we would expect: the leaders of the decade are Pittsburgh’s Sidney Crosby, Los Angeles’ Anze Kopitar, Tampa Bay’s Steven Stamkos and Chicago’s Jonathan Toews. 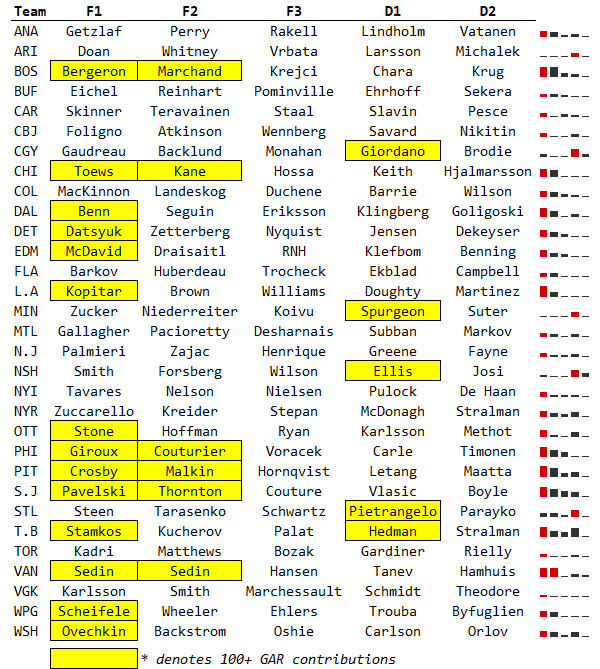 One thing that jumps out is that, despite tremendous track records of success in Chicago, Pittsburgh, and Los Angeles over the past 10 seasons, no team has had a more productive core group of players than Boston.

The Patrice Bergeron - Brad Marchand combination has been indomitable for ages, anchored by the ageless Zdeno Chara on the blueline. Think about how talented this core is and what it means for the players that were left on the outside looking in – David Pastrnak and Charlie McAvoy, two staples of the current roster, couldn’t crack Boston’s top five.

The other thing that jumps out is that the Canadian teams, save Vancouver, are strongly represented by players from the back half of the decade. There were some interesting debates across the Canadian clubs to be sure – I’ve added some quick thoughts for each club below:

Calgary Flames: While the defensive pairing was quite obvious (Mark Giordano and T.J. Brodie have been sensational for years now), the forward groups were a bit more difficult. Sean Monahan edged out Matthew Tkachuk for the final forward slot, but it’s close enough to be debatable, and that’s with giving Monahan credit for three additional seasons of production. Something worth remembering going forward: the Flames are +22 in even-strength goal differential with Tkachuk on the ice since 2016-17, and he is yet to have a season with a negative number.

Edmonton Oilers: If you look at the Oilers' system now, it is teeming with capable defensive players. There is perhaps a sensible argument to be made that one of these defensive prospects, at some point in time, will become a trade piece for an impact winger. But that hasn’t always been the case. The Oilers' five best skaters of the decade included the three above forwards, Taylor Hall, and Jordan Eberle. Having to take two defencemen, Eberle and Hall were displaced for Oscar Klefbom and Matt Benning. Two quality defenders, but defenders who stick out like sore thumbs compared to their peers. (That said, Benning in particular has always been underrated.)

Montreal Canadiens: I was surprised to see David Desharnais make the cut on the Montreal roster, but keep in mind two things: the Canadiens have been the most average franchise of the decade, finishing 15th in winning percentage. And the years where they were great were really anchored by a small core of dominant players – Max Pacioretty and P.K. Subban in their primes, Brendan Gallagher entering his own as the future face of the franchise, and veteran Andrei Markov, who played through the 2016-17 regular season. All great players, but a reminder that the second tier in Montreal was quite thin – so much so that the next two players from the cut line were Paul Byron and Josh Gorges.

Ottawa Senators: Before the Ottawa Senators became the NHL’s disaster on (and off) ice, the organization had done a masterful job of securing high-end talent. So much so that you wonder how it was possible this team, save one Stanley Cup run in 2016-17, couldn’t get over the playoff hump. But perhaps the most interesting point, which I think has been realized years after the fact: Erik Karlsson may have been the face of the franchise, and his peak may have been second to none on the blueline. But the team’s most valuable player over the past decade was Mark Stone. We’ve seen that play out since Stone left the franchise to help take the Vegas Golden Knights to new heights.

Toronto Maple Leafs: Nazem Kadri! I don’t want history to be rewritten merely because Kadri didn’t have the luxury of playing for the same calibre a team as, say, Auston Matthews. Kadri’s exit from the organization was unceremonious but consider these two data points: he was just -2 in goal differential at even strength for a Toronto team that was -42 with him off of the ice. Don’t forget about his 161 goals and 357 points either.

Vancouver Canucks: The Sedin twins were obviously going to occupy the top two spots, but the closest mathematical race in the league was actually for the third forward slot here. Jannik Hansen played for Vancouver for nearly a decade prior to being traded to San Jose in 2016-17, and his longevity with the club helped with his counting total compilation. But a mere rounding error away from stealing the third spot? Elias Pettersson, who has played all of a season and a half with the club. Pettersson is a superstar of the highest order, and two freakishly strong performances were nearly enough to earn All-Decade consideration.

Winnipeg Jets: It is a shame that Dustin Byfuglien’s exit from the organization was so abrupt. I’m not sure if we will see Byfuglien skating for another team in the NHL at some point in time, but I do know that he was a big reason for Winnipeg’s return to competitiveness. Defencemen with that much size and offensive prowess are impossible to come by, and the Jets parlayed that into years of respectability.