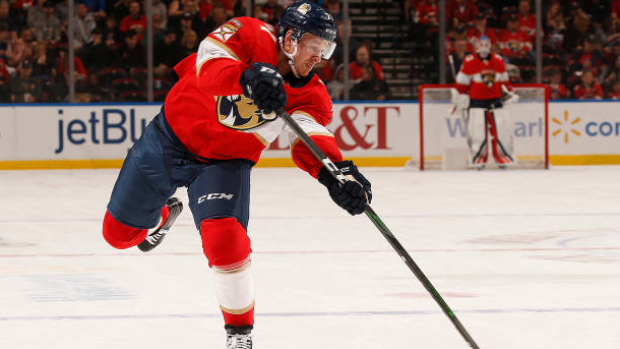 It’s time to dissect another Canadian team. Let’s head to the nation’s capital, where the Ottawa Senators will look to take a big step forward amid a multi-year rebuild. That big step will be quite contingent on their ability to resuscitate a lifeless power-play unit that cost them dearly in the standings last season.

Why focus on the power play, especially when a team finished 30th in the standings with holes in just about every area of the game? The short answer is that the one thing this team did reasonably well was put the puck in the net – relatively speaking. Ottawa scored 2.3 goals per 60 minutes (23rd) last season, sandwiched between the New York Islanders and Arizona Coyotes. On the power play they averaged a dismal 5.1 goals per 60 minutes (30th). 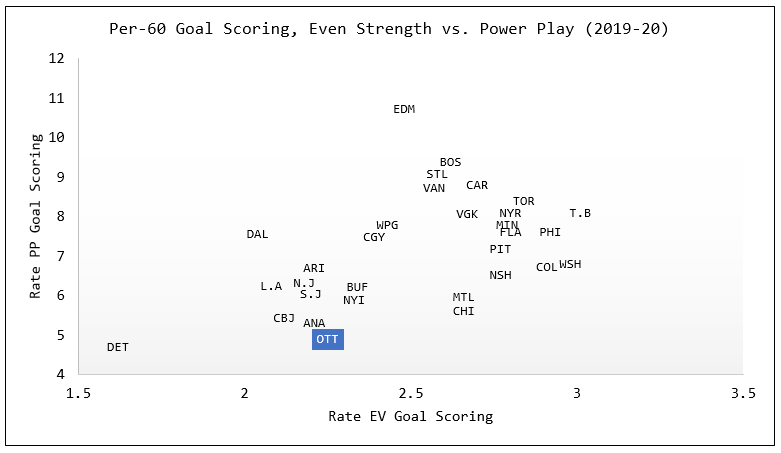 The plotted data at the team level expectedly shows correlation between a team’s success at scoring at even strength and their respective success at scoring on the man advantage. That relationship exists because, in large part, finishing talent is finishing talent irrespective of game state, and that trend holds consistently year after year. If you regress these numbers, you would expect a team with Ottawa’s even-strength finishing talent to score about 6.6 goals per 60 minutes on the power play, which would have placed them 22nd in the NHL.

There are obvious differences in offensive strategy when it comes to these two game states, though. Even strength is more about creating chaos in front of the net and generating high volumes of opportunities through sustained offensive zone pressure. Power plays tend to rely more on setup, structure and great individual shooters of the puck (as well as great distributors of the puck).

An interesting quirk: Ottawa never had a problem generating shots on the opposition’s doorstep in either game state. That area of the ice is where some of the most dangerous scoring chances happen, and Ottawa was quite good at recovering loose pucks and hunting rebound opportunities spilled from the opposing goaltender.

But outside of the low slot, Ottawa was rarely dangerous – indicative of a team that knew they were limited with shooting talent up front (Data via HockeyViz): 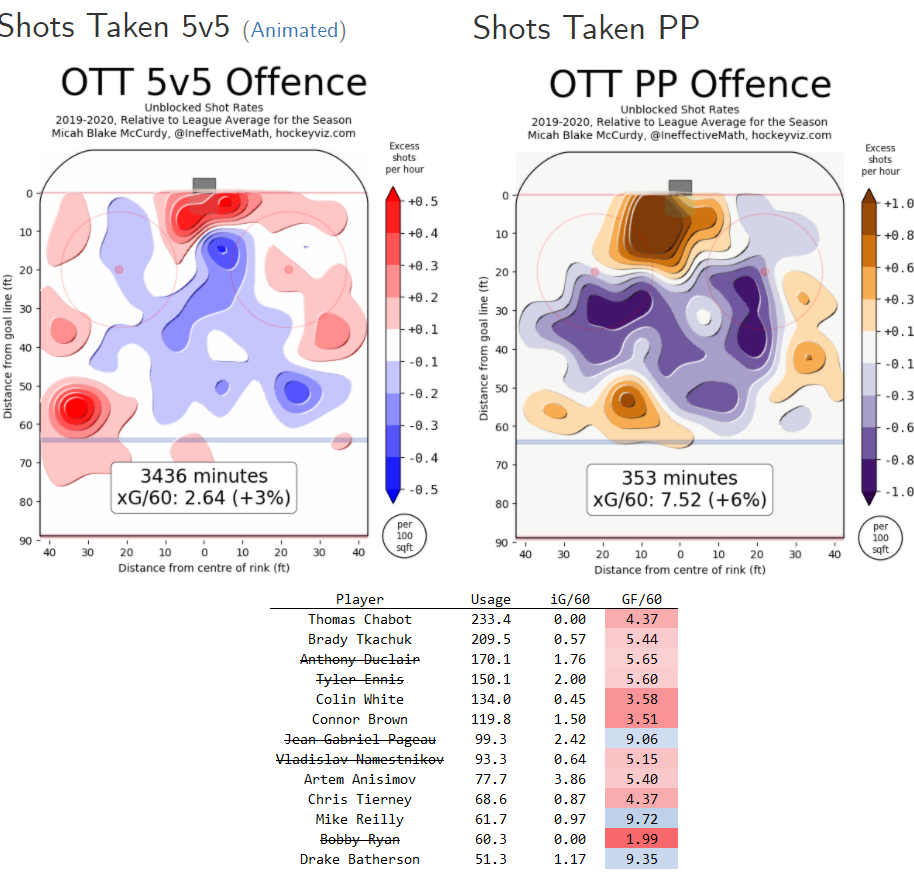 Outside of an early season hot stretch from the departed Jean-Gabriel Pageau, Ottawa’s young skaters struggled across the board last season.

Watching Sens games, it was apparent that they were quite capable at creating havoc in front of goaltenders, reliant on winning those net-front battles and creating the right angles for shot redirections. Also apparent: the team rarely had those clean offensive zone sequences where the puck was matriculated through the offensive setup, creating shooting lanes from the circles or the high slot. The underlying shot data corroborates this.

It’s impossible to apportion what percentage of that is structural breakdowns versus the limitations of personnel up front, but we can reasonably conclude that both were issues for D.J. Smith’s team. The personnel issue will take some time to solve, as Ottawa has invested heavily in a bunch of young and developmentally raw players, some of whom have yet to see regular NHL action.

That’s also why Ottawa’s biggest signing of the summer – the three-year, $15-million contract for forward Evgenii Dadonov – was critical.

Dadonov was integral to the success of Florida’s first power-play unit last season; a talented passer and goal scorer who flourished with the likes of Jonathan Huberdeau, Mike Hoffman, Keith Yandle and Aleksander Barkov. Barkov managed to tally 11 goals on the power play last season, more than double the closest Ottawa skater. 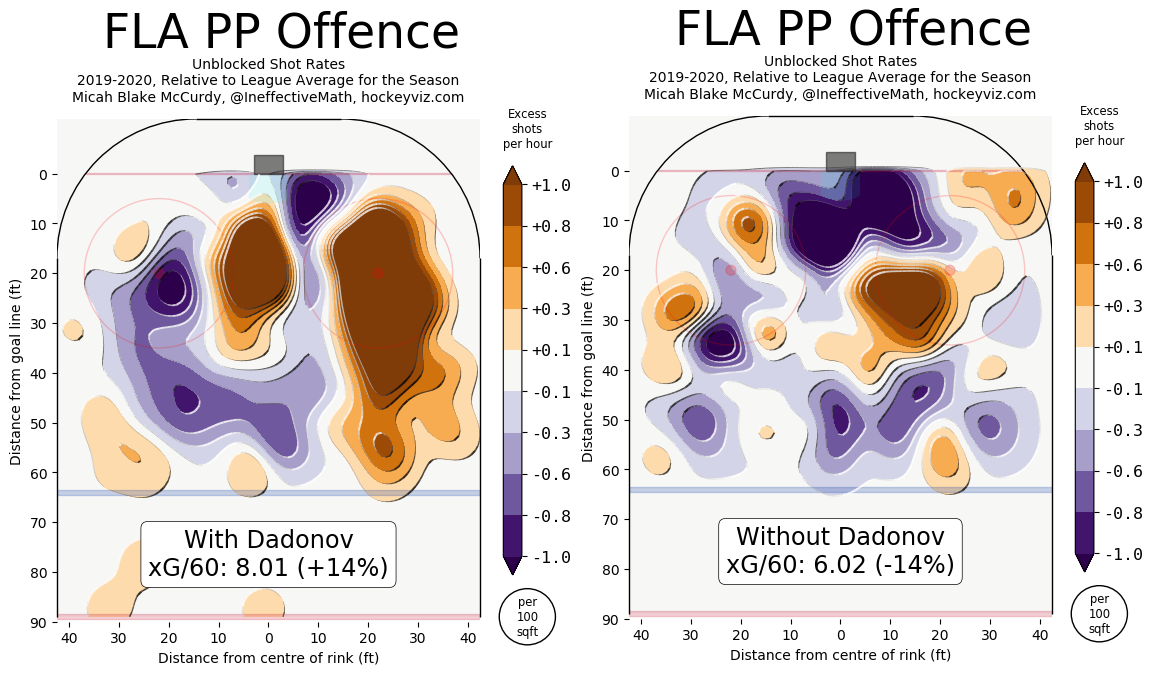 Dadonov is a versatile offensive forward, and you can bet your money he will be seeing extensive time on the first unit with the likes of Brady Tkachuk and Thomas Chabot. Find two other impact skaters in the Ottawa lineup and you at least have addressed the personnel concerns that enveloped this team last season.

The upcoming Ottawa season is about taking a step forward – the roster is still too limited to chase down a playoff spot. But they can take a big step towards becoming a competitive hockey club again, and a more productive power-play unit would dramatically ease the burden on the rest of the lineup.