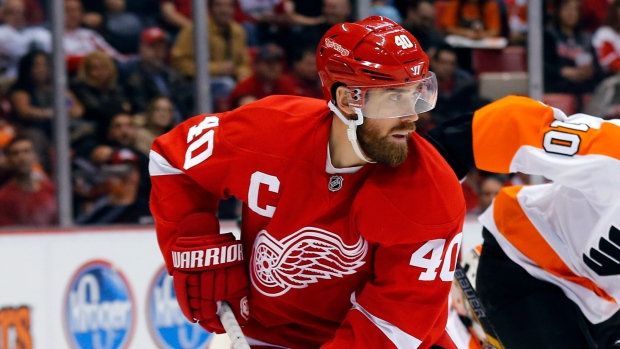 DETROIT - It was hard to tell which pass was more impressive. One covered over half the length of the ice, while the other threaded its way through traffic in front of the net.

Both came from the stick of Henrik Zetterberg, who has made plays like that seem routine for over a decade in Detroit.

"That's what he does," teammate Justin Abdelkader said. "He's a great player. He's our leader."

Abdelkader was on the receiving end of those two assists from Zetterberg on Friday, and although the Red Wings went on to lose that game to Calgary, the Detroit captain's performance was encouraging. Zetterberg missed four games with a head injury before returning in the middle of last week, and although the Red Wings have plenty of young talent and depth, the 34-year-old centre remains a centerpiece of their Stanley Cup hopes.

Detroit is in third place in the Atlantic Division, in solid position to make the playoffs for a 24th consecutive season. Much of the attention has been on a new wave of younger standouts the Red Wings have developed — 24-year-old Tomas Tatar leads the team in goals, and 25-year-old Gustav Nyquist is close behind. But Zetterberg remains a reliable link to the team's championship past, part of an old guard that still includes Pavel Datsyuk and Niklas Kronwall as well.

Zetterberg was named Detroit's captain in 2013, following Nicklas Lidstrom and Steve Yzerman in that role. Zetterberg's top offensive season was in 2007-08, when he set career highs in goals (43) and points (92) while helping the Red Wings win their most recent Stanley Cup. By Detroit's standards, though, that was a while ago, and when the Red Wings struggled just to make the post-season in 2013 and 2014, there was some concern that a rebuild was approaching.

Zetterberg had back surgery just over a year ago, and although he was able to return before Detroit was eliminated from the playoffs, his durability was going to be crucial this season.

Those four recent games are the only ones he's missed in 2014-15. Going into Monday night's matchup with Edmonton, the Swedish forward had 15 goals and 38 assists, and he was one point behind Datsyuk for the team lead.

His value was on full display during his effortless first period against the Flames. The puck came to Zetterberg near the corner in his own zone, and with one quick flick of his stick, he sent it all the way to the opposite blue line, where Abdelkader took the pass and scored on a breakaway.

"Obviously Abby was all by himself on the far blue line. I don't really know what happened — how he got that open," Zetterberg said. "Then he had a nice finish."

No big deal, in other words.

Later that period, on a Detroit power-play, Zetterberg's pass from the right circle was so good Abdelkader could hardly help but redirect it into the net.

The secondary assist on both those goals went to Erik Cole, whom the Red Wings acquired at the trade deadline. He and Zetterberg already look comfortable together.

"It is fun to play with him. Obviously, it's really fresh," Zetterberg said. "It's going to be fun here to create some chemistry going into the playoffs."

Of course, the list of players who can look good alongside Zetterberg is not a short one, and that's why as the playoffs approach, the Red Wings are hopeful their captain can remain healthy and productive — making more beautiful passes each night.

"That's the player he is. He skates with his head up, and he's really smart," Abdelkader said. "He kind of knows the play he's going to make before he makes it."