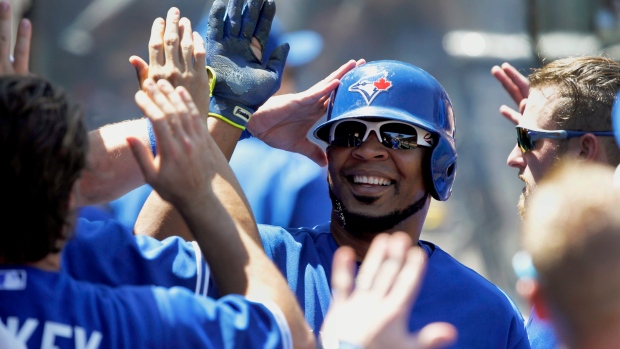 “What if nobody goes for the blond?”

That’s a line from the movie, A Beautiful Mind. It’s delivered by Russell Crowe, playing the role of famed economist, John Nash, father of Equilibrium Theory.

A theory brought to life through an auspicious set of free agent market circumstances on Thursday night when former Jays’ slugger, Edwin Encarnacion, signed a three-year, $60 million deal with the Cleveland Indians.

Equilibrium Theory says—in a woefully simple explanation— that the best competitive outcomes happen when individuals serve their own ambitions under the umbrella of what’s best for the group as a whole. In A Beautiful Mind, it was used to detail why a group of college boys should go after girls in their ballpark, instead of all trying to win the affections of one stunning blond.

In this offseason so far, Encarnacion played the blond and players like Kendrys Morales and Steve Pearce played… well, you get the idea.

The baseball market, for the record, never plays by Equilibrium Theory, at least not intentionally. If it did, that would constitute collusion. Instead, baseball goes by the old Adam Smith maxim of every man for himself. It relentlessly pushes for the best options, to be the best, driving up the price of talented free agents. It’s certainly what Encarnacion’s agent, Paul Kinzer, expected.

Which is why Encarnacion should fire him.

Encarnacion was easily one of the biggest bats on the free market this offseason, the kind of thumper that should have commanded much more than three years, $60 million. If Encarnacion weren’t a DH and first basemen, and understood the urgency for him to take the big dollars, he would have.

He could have controlled at least one of those things.

First base playing DHs are like universal recipients; they can take just about any player donor. EE might have been one of the best, if not the best first base/DH option on the market, but there was a lot more potential competition from all over the field, and that’s saying nothing of the fact that A) there were other good 1B/DH’s and B) the market this offseason also put a premium on flexibility, both on field and in contracts. Basically anyone that could supply a steady bat and field their position on some of the part of the field can do the 1B/DH switch, which made the market for replacements vast.

Kinzer failed to do the one thing that an agent of his calibre should do well: know the market. He’ll say it was timing, but, you make your timing as the agent. You keep communication channels open and you know and look at the trends. All GM’s knew that EE would test the open market, and so he did, but that open market was also going to have a lot of capable talent that could do all or most of EE’s job for a substantially reduced price, which should have spurned Kinzer to action—taking the biggest initial offers.

I don’t think any team in baseball felt Edwin wasn’t worth a pretty penny, they just didn’t want to pay that money for a DH with limited speed and defensive impact when a discounted version could be serviceable, allowing for retooling elsewhere, like rotations, bullpens, and draft picks. Don’t get me wrong, Morales is not Encarnacion, but Morales was signed when it was speculated that EE wouldn’t go for less than five years, $100 million and Steve Pearce fills more holes.

Spreading EE’s value across a bunch of hole filling players, then spreading those players around the field is a plan that works for the Jays and they still have money and flexibility. They have future options, unfortunately, future unknown options don’t sound as good as a known big name, proven talent to fans who want to win now. While I mostly toss out the views of fans as emotional and irrelevant, they may be onto something this time.

Fans will bicker that the Jays front office let a key player get away at a bargain price, but the smart play was to give EE a solid offer and not waste time landing a sure second best, before EE committed and drove the prices up on something inferior (the usual off-season narrative). At least it was the smart play back when EE was hoping for five-years, $100 million…

However, since this was not an intentional use of Equilibrium Theory, once the demand for EE’s services started to shrink as teams filled their spots, the onus on him was to sign. This is what handed the Indians a steal of deal, and this is where I think the Jays screwed up.

I’m all for the Jays keeping costs down, but once EE’s price fell, the Jays should have, once again, offered EE that four-year deal and then dealt with Morales, either by trading him or eating his salary. EE wanted to be in Toronto, and once the number started falling, the Jays could and should have re-offered their original deal. Now they’ll have to face his bat, working for a team that ended their season, no less.

In the end, the Jays are still a solid club, and their plan to get younger and more flexible is still intact, but their singings to date will not recoup the power potential that Edwin had. At prices above and beyond $100 million, that trade in priorities was easy enough to swallow. Now, however, when the difference between facing EE and having him back is discounted by $40 million, well it’s the kind of thing that will keep Jays fans, front office, and agents up at night.