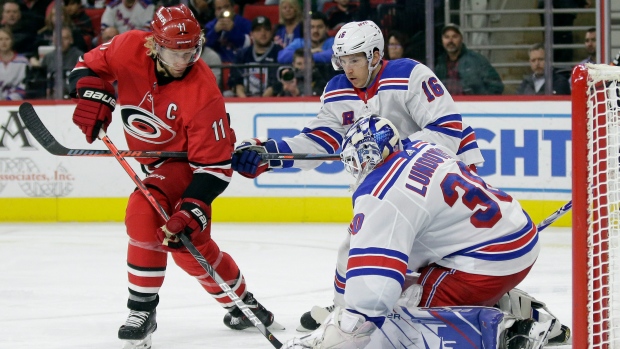 Over the next few weeks, we will be previewing each qualifying round series in detail.

An archive of previews can be found here:

Today, we look at the fourth and final Eastern Conference matchup featuring the sixth-seeded Carolina Hurricanes against the No. 11 New York Rangers. 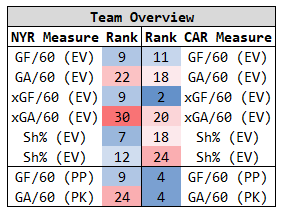 This appears to be another Eastern Conference matchup where the teams appear to be polar opposites.

The Hurricanes had their true breakout year a season ago, where they parlayed dominant offensive zone time and impressive shot differentials into a surprising playoff berth.

This year has been more of the same – their scoring rates still lag a bit relative to what we would expect from a team that finished top five in shot rates (60.1 per 60 minutes), expected goal rates (2.6 per 60 minutes), and scoring chance rates (28.7 per 60 minutes), but they continue to combat average shooting percentages through distinct volume advantages.

The one notable improvement from this season? Head coach Rod Brind’Amour appears to have put together one of the more well-rounded special team units in the league.

Carolina is one of three teams – joined by the Boston Bruins and Edmonton Oilers – to finish top five in both rate scoring on the power play and rate scoring defence on the penalty kill. Last season, Carolina finished 20th and eighth respectively in those categories.

Their opponent is still very much a team in transition – a flawed lineup if you are benchmarking this Rangers team against your average playoff group.

Developing youth and a top-heavy lineup forced the team to play a counter-attacking style, and for the most part it worked. Despite getting just 46.7 per cent of the shots (29th), 47.3 per cent of scoring chances (28th), and 46.3 per cent of expected goals (29th), the Rangers outscored their opponents 173 to 162 (+11) at even strength.

But it is undoubtedly a team of two talents – the star power at the top of the lineup that can give opponents absolute fits off the rush, and the depth players on the roster who struggled all season long.

A quick look at on-ice goal differentials over the regular season shows just how disparate play was out of New York’s top-six and bottom-six forwards, which will be a key plot point to follow: 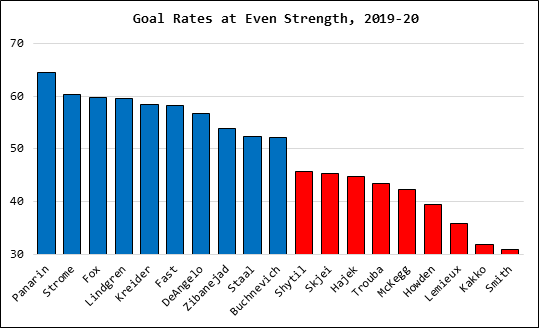 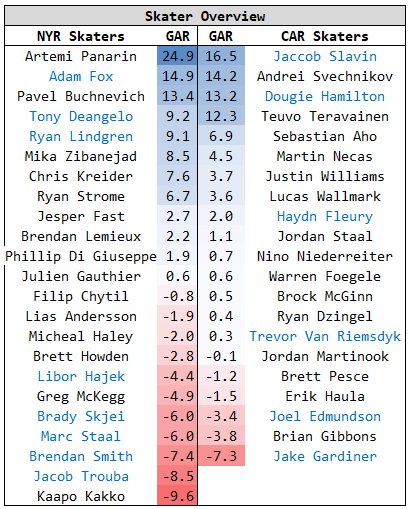 Carolina has a notable depth advantage in this head-to-head matchup, but New York has the best player – and perhaps the best line.

Artemi Panarin put in a season for the ages, scoring 32 goals and adding 63 assists (95 points) in an impressive debut year on Broadway. The Breadman found instant chemistry with regular linemates in Ryan Strome, Jesper Fast, Mika Zibanejad and Pavel Buchnevich. The on-ice goal differentials these trios carried over the course of the season were mesmerizing:

While it is easy to make it about one player, the reality is the Rangers were just distinctly different teams depending on whether or not their first line was deployed.

To that end, you have an interesting matchup the other way against Carolina’s stout blueline. Few teams have the blueline personnel capable of bottling up Panarin, but Jaccob Slavin and Dougie Hamilton – arguably one of the league’s most formidable pairings this season – were tasked against the opposition’s best all season long and performed admirably. And thanks to the time off, Carolina has an injured Hamilton (fibula) back — an injury that would’ve ordinarily sidelined him for the playoffs.

In the four games we saw between these teams during the regular season, the Carolina top pairing saw about 52 per cent of their minutes against the Panarin line. That’s something we would expect to continue heading into the five-game play-in round.

One thing to keep in mind with this Carolina lineup: it was going to look a bit different down the stretch of the regular season, because this was an active team trying to capitalize on its window of contention.

The most notable trade saw them land forward Vincent Trocheck from the Florida Panthers, but for this series, it’s worth noting that defenceman Brady Skjei – who played 60 games for the Rangers this season – was sent to Carolina at the deadline, a player intimately familiar with the playing styles of opposition forwards here.

And Skjei isn’t the only defensive add the team will lean on to slow down the Rangers attack. Sami Vatanen, acquired at the deadline from New Jersey, is ready to return from a leg injury.

We have talked about the difficult decisions a number of teams will face when it comes to choosing a Game 1 starter.

The Rangers – much like their rival on Long Island – have a wealth of competent goaltenders to choose from, and yet only one crease. It would seem logical that the crease is Henrik Lundqvist’s until further notice – the future Hall of Famer has a sterling record and is the safest choice of the three.

That said, it’s also the first time where there is a legitimate question about whether or not the team’s backup is better than King Henrik. Igor Shesterkin was fantastic in 12 appearances, and Alexandar Georgiev – who logged 34 games this season – did outplay the Swedish veteran. This will not be an easy call for David Quinn.

Adjustments for shot quality paint both goaltenders in a better light, in large part because Carolina was notorious for conceding shots out of the low slot. Reimer simply fared better against them. 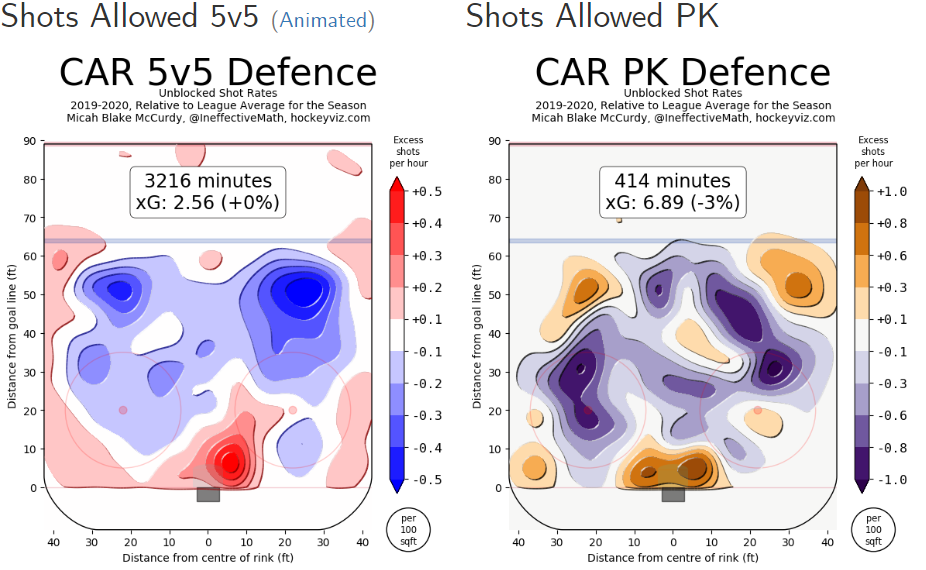 This has the potential to be one of the tightest matchups we see in the play-in round.

Carolina is one of the most puck-dominant teams in the league and flourishes at applying sustained offensive zone pressure. But they are going to face a Rangers team that’s flush with capable goaltending and houses one of the league’s best counter-attacking forward groups – an attack that can expose undisciplined teams, especially when it’s coming from the Panarin line.

Carolina is going to need their depth players to carry a bit more of the burden here, because the Rangers may be just as formidable at the top of the lineup.

Carolina in five, but this is a pick lacking confidence – this New York team is dangerous if they can mitigate the exposure of the depth of their lineup.