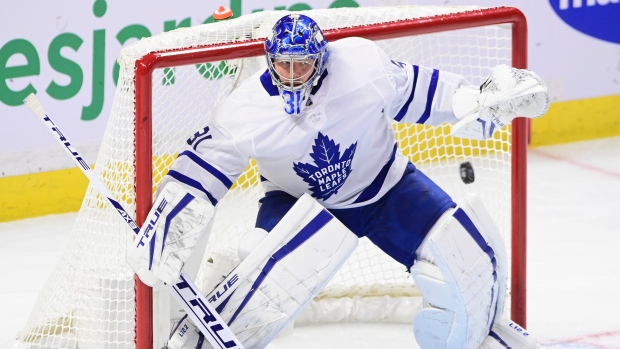 TSN Toronto Reporter Mark Masters reports on the Maple Leafs, who held an optional practice and skills session on Monday at the Ford Performance Centre.

With only seconds remaining in regulation on Saturday night, Leafs defenceman Jake Muzzin blew a tire in the offensive zone allowing the Edmonton Oilers to break out on a two-on-one rush the other way. Moments later, Ryan Nugent-Hopkins slid the puck past Justin Holl and onto the stick of Josh Archibald, who had already scored in the game.

"Main focus for me is the shot and then try to slide over and take away as much of the net as possible," said Frederik Andersen. "Just happy to make that save."

The Leafs goalie was able to get his arm on Archibald's shot and preserve a point for the road team.

The numbers still don't look good as Andersen has an .892 save percentage this season, but the 31-year-old is looking more and more comfortable in the crease.

"Freddie's been playing unbelievable and making huge save after huge save for us," said Michael Hutchinson, who has moved into the backup role with Jack Campbell (leg) sidelined. "As a goalie, in this division, all you need is to give your team a chance and especially our team, we have so many offensively gifted players."

The North Division has featured plenty of crooked numbers so far. Entering play on Monday, six of the top 11 scorers in the National Hockey League called Canada home. The numbers, of course, aren't as flattering for some of the goalies. But after allowing nine goals in the first two games, Andersen is trending in the right direction with a .910 save percentage in his last six starts.

"I feel like I'm moving really efficiently," Andersen said on Saturday night. "After those first few games, I figured out a little bit how I'm supposed to play and how I play my best and I got back to a little more of that. So, overall, pretty good."

"He looks so calm in the net and big," gushed Hutchinson. "He's just making big saves at the times that we really need it. In the first period against Edmonton, he made a couple seam saves that gave our team a chance."

The Oilers outshot the Leafs 13-9 in the opening period.

"Every single game it seems like he makes a big save right when our team really needs it and that goes a long way for the confidence of the guys," Hutchinson said. "I'm sure it gives the guys a little more confidence with the puck and being able to make things happen on the offensive side."

The Leafs usually start three-on-three overtime with Auston Matthews and Mitch Marner on the ice, but on Saturday it was John Tavares and William Nylander, who got the call alongside Holl.

"We saw that Matthews had played two-and-a-half out of the final three minutes of regulation in a bid to make a push to try to win the game in regulation time and not have it go to overtime," coach Sheldon Keefe explained. "I looked down the bench and didn't feel that Auston was quite ready to go out again and skate up and down the rink in three on three. I felt another minute or so would be beneficial to him."

The Oilers started overtime with Connor McDavid, Leon Draisaitl and Tyson Barrie. The Leafs won the faceoff and got the first opportunity to end it.

"John made a tremendous play to spring Will, who had a chance to win the game and it didn't go in for us," Keefe said. "They countered, like usually happens at three-on-three, and it went in for them. Generally, our plan would be to start Auston and Mitch as we've done in previous games, but in the circumstances, you're always adjusting."

Nylander changed for Matthews 37 seconds in, but the Leafs centre could only watch as Draisaitl and McDavid converted on a two-on-one.

While Matthews is known for his ability to fill the net, Hutchinson was asked which Leafs players possess underrated shots.

"Willie's got a deceivingly hard shot and quick release," the goalie noted. "As far as a hard shot, Pierre Engvall, it’s like he's trying to put the puck through the net every time he shoots. You can tell Mitchy really worked on his shot this year, too, coming back. He's got a little more zip behind it and Muzz has a cannon as well."
---

Matthews has scored in five straight outings, but isn't satisfied with how he and linemates Marner and Zach Hyman are playing.

"I feel like we kind of have little dips and then we have moments when we're really on it, creating a lot of offensive-zone time and stuff like that so we just want to stay consistent throughout the 60 minutes and apply pressure nonstop on the other team and collectively play in the offensive zone as much as possible," he said.

That is actually a team-wide issue right now with the Leafs looking for more sustained pressure in the opposition end. However, the priority, early on, has been to tighten up defensively.

"There is a balance there for sure," Keefe said. "They carry a bit of an offensive burden given the abilities they have and what they mean to the team. They know they are relied upon to produce offence. At the same time, we have made it very clear — not to just them but the entire team — that we have to prioritize defence. We have to be better that way and look to generate offence through defending well and frustrating teams and getting pucks back with teams in vulnerable positions where they are not ready to defend. That can be an advantage for us."

After a loss to Edmonton on Jan. 20, ​Matthews lamented the fact his team seemed fixated on containing McDavid and Draisaitl and ultimately played too safe in a 3-1 defeat.

"It is a bit of an adjustment with that mindset," said Keefe. "Those guys are finding their way through it. The commitment that we've seen from Matthews and Marner on the defensive side of it with the difficult matchups they have had throughout, you know, it's been really good to see."

Matthews and Marner have combined for eight even-strength goals this season while the rest of Toronto's forwards have supplied 10.

Forwards Joe Thornton and Nick Robertson skated on Monday as they continue to rehab injures. Thornton sustained a fractured rib Jan. 20 against Edmonton while Robertson hurt his knee four days earlier in Ottawa.

"The only update would be that they are making progress," said Keefe. "Thornton and Robertson skated and that is a good sign, but they are still on the same timelines. Nothing has changed there, but it's very positive to see them on the ice and moving."

Per the initial timeline announced by the team, both players are expected to miss at least four weeks.

After a day off Sunday most of Toronto's top minute munchers were told to stay away from the rink and get some extra rest on Monday.

"It is a chance to recover from the 10 games in 18 days that we just played," Keefe said. "Also, coming back from the West and getting in really late – it was 4 a.m. when I got to bed getting back from Edmonton – that in and of itself is something to recover from. We wanted to give ample time for that."

But Nylander, a rink rat, still snuck out to take a twirl and do some skills work. And the third and fourth lines and third and fourth defence pairings, minus Zach Bogosian, were on the ice. Keefe kept tabs from the sidelines.

"There is another group of guys that haven't played as much or there's some very specific things that we want them to work at," the coach added.

"We were doing a lot of down-low work, getting pucks off the wall and using your body to shield the defenders," revealed forward Adam Brooks, "and things that separate the great players from the average ones. We did a bit of a scoring game at the end just within the drill we were doing and Spezz won."

Jason Spezza seemed to be enjoying himself, with his laugh echoing across the rink at different times. The 37-year-old is playing a fourth-line role this season, but is also relied upon to help mentor younger guys.

"You see why Jason has been able to play as long as he has and been so successful in that time as well," Brooks said. "It all stems from the amount of work he puts in and the passion he has for the game, so if you're able to take something from him and put that into the way your conduct yourself there's a chance that your career is going to go a little bit better."

Brooks has only played one game this season, but he made an impact scoring a power-play goal, which was assisted by Spezza. That's not the only big moment the pair have shared.

"We did play a basketball tournament, just in the players lounge spread out and following guidelines, on Nintendo Switch and me and him were the champions so that was a lot of fun to bring that home with him," said Brooks with a smile.

"It is great, for sure, not just for the language thing, which is the obvious one," said Keefe, "but as a member of our development staff here now for a few seasons, he has really picked up and learned a great deal from the skill development standpoint and the things that are important for us from a fundamental skill standpoint. He has gotten to the point where he is running sessions on his own here now. He is a great asset for us to have."

Mikheyev was promoted to the Tavares line last week, but has just two assists on the season.

“He has really picked up & learned a great deal from the skill development standpoint & the things that are important for us ... he has gotten to the point where he’s running sessions on his own here now. He is a great asset for us” pic.twitter.com/RsQpxpFiRp

"It's obviously a little frustrating," the 20-year-old admitted with a smile. "It was a very long time ago since I played a game, but we're hanging in there and we're having fun in practice and it's great being with the guys again."

Sandin played 28 games with the Leafs last season, but didn't see action during the playoffs.

"We are sensitive to the idea that he hasn't played yet and how difficult that is," Keefe acknowledged. "At the same time, we have really tried to prioritize using this time productively with him to maintain or really improve his work habits and his time in the gym with his training, maturing his body and learning what is necessary to be an everyday NHL player."

Sandin has been passed on the depth chart this season by 27-year-old KHL import Mikko Lehtonen, who signed a one-year deal in the off-season. The jury remains out, however, on whether the Finn can make the transition to the North American game.

"He still doesn't look comfortable out there," Keefe said of Lehtonen on Saturday night. "We have put him in two of the last three games here and given him that opportunity. Now, we have a break and we'll continue to work with him in some areas of development where we would like to see him get better now that we have lots of examples and film of him playing in the NHL and where we think he can get better."

Travis Dermott has sat two of the last three games as a healthy scratch to make room for Lehtonen, with Keefe going out of his way to say the 24-year-old has done nothing wrong.

The Leafs haven't lost any man games due to injury on defence yet this season.