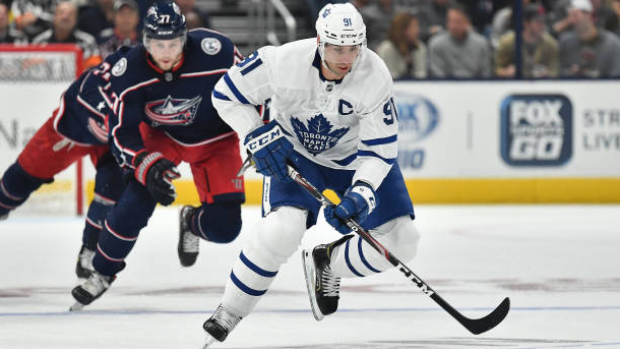 TSN Toronto reporter Mark Masters checks in daily with news and notes on the Maple Leafs, who practised in two groups – main and reserve – at the Ford Performance Centre on Friday.

The pandemic pause has given John Tavares a chance to reset.

"Personally, as I look back on this season, I had some really good stretches of hockey and I felt at times I wasn't as consistent as I'd like to be and that kind of coincides with how things went for us as a team," said the Maple Leafs captain, who scored 26 goals and produced 60 points in 63 games.

Health played a part in the up-and-down nature of the season. An oblique injury sustained last summer forced Tavares out of the World Championship and threw a wrench into his off-season plans.

"I had the oblique kind of lingering for a long time and just didn't have the type of summer that you'd like to have in terms of ... a training standpoint," Tavares said. "So, I knew this break would be good for me to just rest up and get physically to a good point."

The oblique wasn't the only health issue to slow Tavares during the regular season. He missed nearly three weeks of action early on after breaking the index finger on his right hand. And t​here were also other ailments that he never made public.

"He had a few different things that were nagging at him throughout the season," head coach Sheldon Keefe revealed. "The time off has really benefited him. He put in a lot of work away from the ice even before Phase 2 began. He was really set up in terms of the training he had been doing himself ... he's really been working and looks excellent. We had him with Mitch [Marner] and [Ilya] Mikheyev within the Phase 2 groups all the way through and those guys really just haven't missed a beat."

Tavares, who will turn 30 in September, focused on his skating during the voluntary Phase 2 workouts.

"Skating's always been a big [thing] for me ever since coming out of junior so a lot of emphasis on that," he said, "It's different parts of my skating and how I can be more dynamic and be more creative and more effective in different parts of the ice. So, that's something I've tried to think about a lot."

Tavares also spent some time thinking about the Leafs' power play, which was on a 6-for-41 skid (14.6 per cent) in the 14 games before the break. Tavares started his career with Toronto playing the net-front role on the man advantage and also saw time on the flank, but now is setting up in the middle/bumper position between Auston Matthews and Marner.

"Certainly my role on the power play has continued to evolve and change over my two years here so just trying to feel that out and see how I can be more productive and find areas where I can be more effective and more of a threat," Tavares said.

Tavares should benefit from the return of Mikheyev. The rookie went down with a scary injury on Dec. 27 when a skate blade sliced his right wrist severing an artery and tendons.

"He's flying out there," Tavares said. “It's incredible just the way he's elevated himself and used this time to get even better."

"He's put in in a lot of work," said defenceman Jake Muzzin, who was rehabbing his own injury, a broken knuckle, alongside Mikheyev during the season pause. "He was focused. He never got distracted or maybe a little down on himself with his situation. He came in and worked his balls off, man, and you can see it now. He's flying out there. He's making plays. He looks good. We're lucky to have a guy like that on our squad that's for sure."

Mikheyev, who's still working on his English-language skills, addressed the media on Friday for the first time since the injury.

"Now it's great," the 25-year-old said with a smile. "I feel good. I have full movement with my fingers, my wrist and arm and everything good now. I'm really happy I have this opportunity. I'm already 100 per cent and I hope more."

Keefe has lauded Tavares for keeping his teammates engaged throughout the four-month layoff.

"We were in consistent contact all throughout it," Keefe said. "As Phase 2 was announced ... there was a real push from our leadership group to take advantage of it and we were fortunate. We had a lot of eager people that came in early and took advantage and that's why we feel like we're a little bit ahead here in terms of how we're able to push our guys and the length of time we're able to keep them on the ice."

Tavares was part of the return-to-play committee so he was active in helping design the protocols and passing along the information.

"He provided leadership and direction for all of us," said Muzzin. "He's a big voice within the league and on our team and we're lucky to have him. He's been the sole leader and communicator through everything. Everyone's been in touch with him and he’s kept tabs on everyone."

"He was definitely talking to me," said 23-year-old defenceman Travis Dermott, "seeing how things were going and making sure I was doing everything I was supposed to.The Phase 2 work was crucial, because it now allows Keefe to focus more on system tweaks in Phase 3 instead of conditioning issues.

“We need the extra time because we feel we've got a lot of things we need to improve upon," Keefe said. "We do have a number of changes within how we're playing and it's going to take some time to adapt to that."

"I've been really impressed with our execution here to start camp," said Tavares. "With such a long layoff you never know how that's going to go, but I think a lot that has to do with the way the guys bought into Phase 2 and took it seriously and really prepared themselves."
---

Cody Ceci and Morgan Rielly struggled at times when paired together earlier this season and Keefe actually broke up that duo shortly after taking over behind the bench. But the pair, reunited in the final game before the pause when Rielly returned from a broken foot, are back together again at this summer training camp.

Keefe likes the balance on that pairing with the smooth skating Rielly able to jump up in the rush while the defensive-minded Ceci can stay back. But the coach also suggested the leash won't be long if there are issues. And although he prefers a lefty-righty balance, Keefe made it clear that won’t stop him from experimenting.

"We're not locked into any of this stuff," he said. "In fact, for a lot of Phase 2 we had Dermott paired with Rielly and we were getting Derms a lot of reps playing on the right side. I think that that's important to have that option, to have that ability and we think that Derms is comfortable and can be comfortable there if we had to make a change. Between Dermott or [Tyson] Barrie moving up with Reilly, we feel like we have the ability to do that but we like this spread for now."

Keefe suggested he may try out different looks as the camp moves along. Another scrimmage – Game 2 of the Team Matthews vs. Team Andersen series – is set for Saturday.

"I do think at some point here – not just with the defence, but the forward lines – we'll end up moving things around a little bit," Keefe said.